Close, but no zombie!

In recent years, the Resident Evil series has deviated wildly from its roots, becoming less about scares and leaning more towards high octane action. To many fans, this made Resident Evil 5 more than slightly disappointing, and while the console entries of the series continue to veer in this direction, Capcom has decided to try and rekindle some of what made the series great with Resident Evil Revelations. While this portable entry in the series does many things right, it still can't seem to recapture the series' luster which was lost after Resident Evil 4.

Revelations is neither a sequel, nor a direct prequel and is actually set in between Resident Evil 4 and 5. Jill Valentine and Chris Redfield now work for a Non-Government Organization called the Bioterrorism Security Administration Agency, a small shadow of what it ends up being in RE5. While Umbrella may be finished, Bioterrorism is still a major threat. Jill Valentine and her partner Parker Luciani are tasked with investigating a seemingly abandoned cruise ship named the Queen Zenobia for possible dangers, and this is where the game starts. 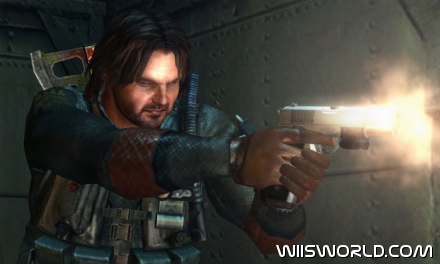 Truthfully, Revelation's story is more than slightly disappointing. The subtitle is misleading as there are no secret reveals towards the overall series plot, and the story itself feels like the equivalent of a RE TV show as opposed to the more movie-like plots of the other games. This is emphasized with the game's strange episodic structure, in which players switch between Jill, Chris and characters which are entirely new and not at all interesting to the series. While it is understandable that maybe the story could have been made more interesting if told from multiple viewpoints, it breaks up the pacing and often ruins the atmosphere cultivated in a previous chapter.

The gameplay does fare slightly better. If players have already tried RE 4 or 5, the setup is familiar. The characters are seen in an over the shoulder, third person perspective and gun aiming is done with a laser sight. The game essentially handles the same as RE4 on the Gamecube, and suffers slightly during the swimming stages because of the antiquated controls. This is offset if players use the Circle Pad Pro and the game becomes easier and more fun. The inventory system is more streamlined than the briefcase in RE4, yet is more forgiving towards item collection than RE5's archaic eight item limit. Instead, each item is given its own category, and only three weapons can be used at a time. Every green herb heals the player completely but thye are rarer than they were in previous titles; at the same time, ammo is more precious and has a cap but doesn't affect other items like in previous titles and will hopefully be similar in later RE games. In an RPG-like touch, players can also collect gun mods to alter attributes like ammo capacity, power and even a charge shot similar to the Mega Man Mega Buster. Revelations also introduces a new scanner item known as the Genesis. Similar to the scanner in the Metroid Prime games, players can scan enemies and locate otherwise invisible items with the device; unlike Metroid, the scanner does not reveal enemy weaknesses, but instead rewards players with extra green herbs for diligent scanning. This carries a bit of a risk/reward system that for the most part works well. The game also uses a dodge mechanic similar to that of the button dodging system in RE4, but employs the use of the circle pad to do so. Unfortunately, this mechanic proves to be largely useless, as there is no prompt to dodge like in RE4, nor does the ability work at times, giving a confusing, irritating mess of a gameplay idea. New to the series is swimming, used when the ship naturally capsizes and fills with water. One would think that things would be worse in the water, but in some ways the game is more fun underwater than on land, especially with the Circle Pad Pro accessory. Enemies underwater are easier to dodge, there's a larger sense of tension due to the fact that you can't actually kill enemies and air conservation is critical. These areas are actually quite good and it would be a wasted opportunity if there wasn't an underwater stage in RE6.

Outside of the story mode, this RPG-style customization and depth is fully expanded in the multiplayer Raid mode. With The Mercenaries already having its own game, Raid mode offers an interesting new bonus game to the series. This mode is actually very similar to Sega's original Phantasy Star Online, with the only objective being to eliminate every enemy in a stage. As players level up, they gain access to both harder levels and better equipment for their weapons, resulting in an addicting action-RPG hybrid that will keep certain players busy for quite some time.

Regardless of the overall series move towards a more action oriented/third-person shooter tone, one of the largest criticisms with RE5 was the emphasis on co-op play and having a partner character throughout the entire game. With a good portion of RE5 taking place during sunny, daylight hours, many argued that a good portion of the series' creepy and disturbing atmosphere was lost. Capcom seems to have at least taken these criticisms into consideration; not only does the entire game take place in darkness, but the main issues with RE5's co-op have been eliminated. While every character still has a partner, they no longer take health items or bullets that players might need, and can actually be useful meat shields. Likewise, there are no real instances where two characters are required, and character partners do occasionally shoot enemies. 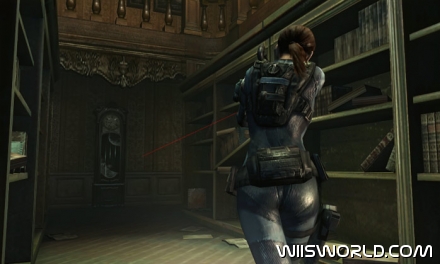 Though Revelation's atmosphere is at the very least more tense and creepy than that of RE5, it unfortunately falls into the same problem of not feeling very scary. There are few if any genuine surprise scares and while the monsters are tough, the lack of variety and basic attack patterns these enemies use make them start to feel bland. The bosses are especially disappointing, being almost nothing more than enormous bullet sponges with giant eyes and claws.

Atmosphere and fright aside, the graphics in Revelations stunning for a 3DS game, and at times even surpass the visuals of RE4, with no slowdown whatsoever. Even during online sessions the game runs very smoothly. The lighting effects are very well done and there's very little of the blocky edges that can be still seen in certain other 3DS titles. The environments do at times get a little dull though, and apart from a few areas, most places feel similar to each other. Thankfully there is a map on the game's bottom screen, but a little more variety in the art would have been good. The 3D is nice to have, but like most movies these days, it doesn't add much to the overall experience, even if the 3D can be set higher than any other 3DS title.

The sound effects are quite well done, with many being recognizable to RE series regulars. The familiar trot of a running Hunter, the bark of a zombie dog and bullet noises are all recognizable, with few other standouts. The music is decent, but as there is little to none of it, even during boss fights, not much can be said about a musical score. The voice work is okay in English, using Chris and Jill's RE5 actors and a few good others. Thankfully though, players do have the option of hearing the voice work in Japanese with subtitles and they sound quite good. 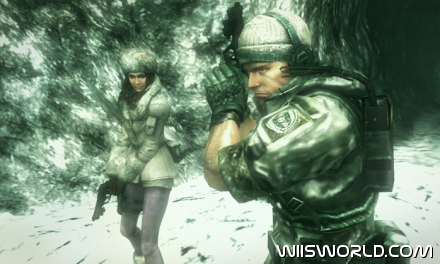 Revelation's main story mode likely won't take most players very long to finish, but there are quite a few extras included. There's a new game plus feature, similar to the previous games in the series, as well as the aforementioned Raid mode and an achievement system of sorts. With all of this content, the game is a decent value for forty dollars, story aside.

Resident Evil: Revelations is not the complete return to the series' survival horror roots that many hoped for. That being said, the game is a great indication of what a talented development team can do with the 3DS hardware and speaks to the system's potential. It isn't perfect, but Capcom should be praised for making a title on a portable that manages to do nearly everything that a 'main' series entry can. Hopefully, RE6 will turn out even better from this little experiment.