The Nintendo 3DS had a troubled launch, mainly due to a lack of new quality games, leading to not only fan dismay and a price drop, but one of the few years that Nintendo's profits have declined. Thankfully, Nintendo didn't give up, and Super Mario 3D Land has started what looks to be a great game lineup for the 3DS.

Once again, Bowser has kidnapped Princess Peach and it's up to everyone's favorite blue-collar Italian to save the day. The only exception is that a fierce wind has given Bowser and his minions the advantage of having 'Tanooki' tails. Other than that, it's a Mario game, not Shakespeare, so the story is bare-bones. 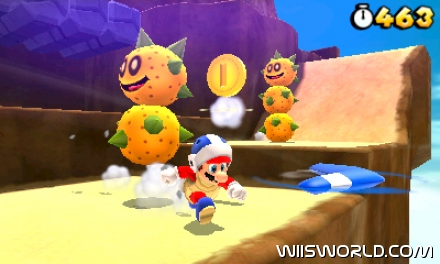 Thankfully, the gameplay is incredibly well done and fun. 3D Land plays like an interesting mix of the 2D Mario titles on NES, SNES and Gameboy and the 3D gameplay that was so much fun in the Super Mario Galaxy games. The levels are all linear with a start and end point, but players aren't restricted to one plane of movement. This means that obstacles and enemies are both easier and harder to deal with. Also, for the first time in a Mario game since Yoshi's Island, players are required to hold down a button to run, which might seem odd to those who grew up on the 3D titles like 64 and Galaxy, but with a little practice becomes second nature. Regarding the power-ups, most are classic Mario from the Mushroom and Fire Flower, to the long awaited return of the Tanuki (yes that is the proper way to spell it) Leaf, and the brand new Boomerang suit. In 3D Land's case, less is more; there are less power-ups than the Galaxy games, but they get used much more frequently and the Leaf is almost essential in some of the later stages.

Though there is some inspiration from the Galaxy games and the Land titles on Game Boy, 3D Land seems to be most similar to Super Mario Bros. 1 and 3 in terms of level design and nostalgia. The game features not only the Leaf power-up, but also the return of mid-boss Boom Boom, Boomerang Bros. enemies, the idea of having two fortresses in a world, airships, Toad Houses, boss fights that harken back to the NES and even a P-Wing power-up which acts as 3D Land's Super Guide feature. It's an enormous treat for Mario 3 fans, with only two real disappointments; the first being the inability to fly with the Tanuki suit (due to the compact levels), and the absence of Kuribo's Shoe a.k.a. the wind-up boot.

Though admittedly 3D Land's graphics are not that much better than that of the Galaxy series, having them on a portable speaks to the 3DS' graphical prowess. The game's frame rate runs smooth as silk, even in 3D and every level is bright, colorful and fun to simply look at. Speaking of which, the 3D effects in 3D land are extremely impressive, adding detail and depth which enhance the gameplay and aren't just put in for the sake of eye candy. 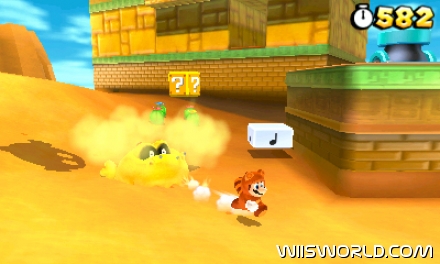 The sound and music in 3D Land are good, but not to the same level as Galaxy. Actual instruments as opposed to Midi music is used, and there are some great remixes of classic Mario music, with some fun original tunes as well. Not Mario's best score, but definitely better than those in the New Super Mario Bros. titles. The sound effects are mostly recycled from previous Mario games, which isn't a bad thing, but might turn some audio junkies off.

Compared to other 2D Mario titles, 3D Land has a surprising amount of gameplay contained within its tiny cartridge. The first eight worlds will take most players around six to eight hours to finish and when they do, they are given a new set of 'special' worlds to go through, effectively doubling the game. For the most part, these special worlds are very fun, but are also a mixed bag. Some worlds may share the same theme as their 'counterparts' (i.e. fire, ice, desert etc.) but are brand new courses. Others however, are just harder or slightly different remixes of the earlier levels, so at times it can feel inconsistent. In some ways, it's similar to the comet challenges in the Galaxy titles, and both time trial and Cosmic Mario stages reappear in 3D land. In order to finish the game entirely though, players will need to collect three Star Coins, similar to the comet medals in Galaxy 2. Thankfully, these coins are nowhere near as difficult to collect as medals, and most players should be able to find them fairly quickly. Players also gain the ability to play as Luigi early in the 'special' world, and a secret 'perfect' stage similar to the one in Galaxy 2 is rewarded for diligent players.

Super Mario 3D Land is definitely the sort of title Nintendo should have launched with the 3DS, and is proof that the classic Mario formula will remain timeless. Mario is hopefully a sign of the 3DS turning itself around and with games like this, the future for the platform is very bright indeed.