A few days ago Capcom announced that Dead Rising was being brought over onto the Wii. In an official press release they've added a subtitle to its name, so now it's called Dead Rising: Chop Till You Drop.

Christian Svensson from Capcom has stated that it's not a port as we originally thought, but created from the ground up using the same engine as Resident Evil 4 (Wii version). Hopefully that will address the clunky aiming system that featured in the original, because it pretty much ruined the game.

They're also improving on the "save" functionality, meaning you probably won't have to go find a restroom just to save the game.

On the flip side, in Wii's version there will be significantly less zombies on the screen. To make up for this, the zombies may act more aggressively. Judging by the screens, there's still quite a lot of them though. 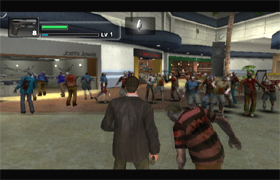 As expected, you'll control Frank using the Nunchuk and Wiimote. The remote's motion sensing capabilities will be used to aim and shoot firearms, throw or swing melee weapons and shake off zombies when they grab you (cool!).

Dead Rising: Chop Till You Drop should come out later this year, sometime during the fourth quarter.

Awesome, I can't wait for this game.

lol at the pic.

This game will be super awesome, I'll be getting this game on its release date because I love the RE4: Wii Edition. This game will hold my horror craving down until Fatal Frame 4 arrive later this year.

Actually, the zombie in the striped shirt is carrying Frank's shopping bags.

SWEET. I hope they get rid of that horrible 30 min intro which you had to sit through. That aiming thing really was dreadful.

The Wii is finally getting a game worthy of motion control. I wonder if it will use the balance board for any of the weapons.

I can't wait for this game to come out. Man though it's going to be a bummer with 1/4 of the zombies the 360 had but still.