La-Mulana is coming to WiiWare 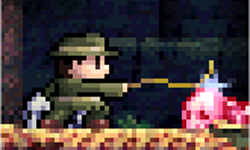 Sooner than you thought

Good news for action platformer fans. After a lot of uncertainty with cancellations and such like, a press release from Nigoro confirms that La-Mulana will, after all, be coming to WiiWare in the US and Europe. The game had originally lost its publisher, but EnjoyUp Games stepped in to save the day.

La-Mulana focuses on exploration and has a certain Indiana Jones type vibe about it. Players take control of Professor Lemeza with his trusty whip to travel through large temples and uncover the mysteries of the human race.

The release date is September 20th for both North America and PAL regions.

That is good news, after all hope was lost at one point. Looks a fun game, could be one of WiiWare's last hurrahs.

@danfango actually I think WiiWare is carrying on when Wii U launches.