The latest issue of Japanese gaming magazine Famitsu has some details of a new game called MadWorld. Published by Platinum Games, they say it will focus on fun, extreme comical violence.

More interesting still, the entire game is in black and white. The only exception being the bright red splatters of blood. 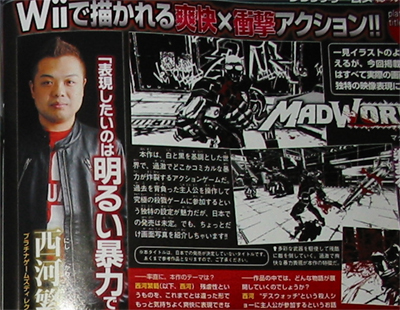 All around me are familiar faces

At a recent press conference a segment of gameplay was shown off where the main character Jack uses a chainsaw to carve up enemies. Attacks are done by swishing the Wiimote.

Platinum Games is made up from many former members of Clover Studios, the people behind cult classics like Okami, Viewtiful Joe and Godhand. So the potential is there for this to be awesome.

Did they make the main characters name "jack" for irony? I'm pretty sure you guys remember Jack Tompson, aka Banman and his hatred of video games. He went so far to write to microsoft to "convince" them to not release halo 3! His favorite word: "hyperviolent". I don't think that's even a real word.

Ah-ha. Even WW loves Gears of War. You can't sneak that quote past me.

Sounds kind of like no more heroes, which was great.

Eh. Black and white only?

I always wondered when a 3D game would appear in back and white, like a black and white movie in HD.

Yeah this looks like it's made by gears of war fanboys. Come on. Mad world was a song used in one of the commercials for gears, there's chainsaws, splatters of blood on the screen, the character's name is Jack. There was a Jack in gears of war just so ya know.

The black and white only comment worries me. I was so excited, as Sadness is only black and white and that was original. But if two come out. Well, we'll have a noir game and a Sin City style game. Oh, and that "all around me are familiar faces" line is originally from the song "Mad World" from the Donnie Darko soundtrack. It was used in the Gears of War commercial.

It reminds me of that killer football game on the Sega Genesis. I just don't remember what it's called though.

If the people who made Okami think it will look cool, then who am I to judge?

It's always these obscure third parties seem to be producing the most innovative, original games for the Wii.

Looks cool, and black and white with blood and flashes of colour would be great. No more heroes let me down by its rushed graphics, I've never in my life played a game with as bad jaggies, was it deliberate in that retro vibe way or was suda 51 just damn lazy?

Now I really want to download that song on my pod of I.