Danish developers Press Play are hoping to bring something new to the puzzle platformer genre with Max and the Magic Marker on the WiiWare download service. 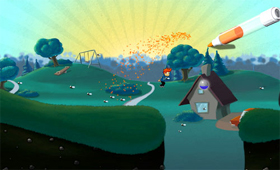 The game features a ten year old kid called Max who one day gets a marker in the mail. Players can use this magic marker to draw platforms and other things on-screen with the Wiimote, while the Nunchuk controls Max's movement. An early video shows a concept level in action:

Note this is work in progress, but still serves to show off what could be a cool game. Press Play aim to include around 15 levels when it's finished.

This is like Crayon Physics meets Lost Winds. Looks awesome.