Pokemon MMORPG made by fans 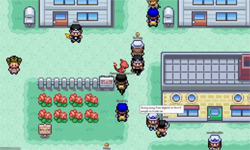 If you've ever dreamed of playing a Pokemon MMORPG, battling and chatting with other Pokefans from around the world - PokeMMO might fill the hole. As the website's tagline "no bullshit, just games" suggests, this isn't an official entry in the series. It's being developed by dedicated fans.

PokeMMO is a piece of PC software that modifies the original Pokemon Fire Red, allowing hundreds of players to connect and progress through the game together. Pokemon Fire Red was originally released on Game Boy Advance, and you have to supply your own GBA rom, as it contains copyrighted material.

Development is still in its early stages, and we don't know if Nintendo will have a sense of humor about this one! Good luck PokeMMO.

Surprised the project has come this far, Nintendo usually jumps all over things that fans want. I'm still bitter about how they blocked the Wii Freeloader from working with a firmware update, spiteful.

I agree this will probably be squished soon, even though you could say it's not harming anyone.