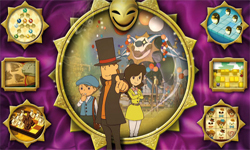 It's been confirmed that 3DS puzzler Professor Layton and the Miracle Mask will be released in both North America and Europe during the month of October. This new entry in the popular series will offer up 150 new puzzles, with a further 365 to be downloaded on a daily basis.

Professor Layton and the Miracle Mask will be available to buy as a download, as well as on store shelves.

Used to enjoy the weekly puzzles over wi-fi in the first game, a new one every day should be even better.

I've fallen a lil behind in this series, got stuck half way through lost future and didn't get back to it yet. The layton movie they brought out was pretty cool.