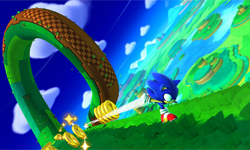 Ten days ago during a special Nintendo Direct video, a new game in the Sonic the Hedgehog franchise was unveiled exclusively for Nintendo Wii U and 3DS.

Today an official blog post on Sega's website gives us some further info on Sonic Lost World. The mysterious characters previously teased are known as the 'Deadly Six' - an ominous set of new enemies which make Sonic and Dr Eggman team up for the first time.

You can also see newly released box art for each version of the game below: