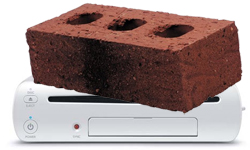 Many gamers in the US and Canada will be keen to do the system update on Wii U, which is required for using the eShop, Miiverse and other important features - but beware.

A number of people are reporting that if the update gets interrupted, the console may be rendered useless. The update is said to be around 5Gb in size, which on slower connections will take quite a long time, but patience is necessary, as found out by L.A. Times reporter Ben Fritz.

Ben wasn't convinced the progress bar of the update was moving, and decided to unplug his console to restart the process.

"The tweets keep coming from people whose power or Internet went out during the 5 gb update and now, like mine, their Wii U is a brick." - Ben Fritz

It's often the case that systems shouldn't be powered off during an update, but in the case of such a large download it seems inevitable some connections will falter. Should Nintendo have handled this differently?

Yikes that is a worry, Nintendo might find themselves inundated with bricked consoles.

My wireless drops out a lot, so I'm really concerned about this.

This is a very large concern for me, my internet can be unstable at the best of times, a 5GB update is a big problem. I seriously hope something is done about this before the EU launch.