Lookie here! A sequel better than the original.

Let's face it people. The first Sonic Riders was mediocre (I know you'll disagree Sonic Phantom ~.^) so I kept my expectations low for Zero Gravity. Boy, was I was blown away. Why? Well, it repaired the numerous flaws it's predecessor had. Graphics, gameplay, control, sound, tricks, and... well, it just about improved (or fixed) nearly everything. 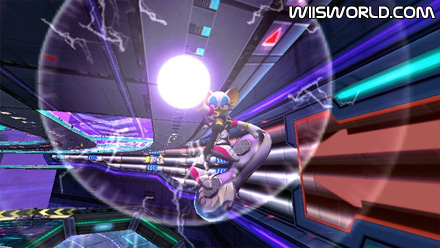 The graphics in-game are pretty good, markedly improved. The demo graphics are spectacular; the flashy sparks and flickering of neon lights really stand out. The demo itself really wraps you up in the story, it seems dramatic but the creators didn't lay it on too thick. Something that bothers me is the placement of Tails' mouth. It's on the middle of his muzzle, not on the side like it usually is. It makes him look like a fish, which is a funny coincidence as his starter board is called "Yellow Tail", which is a species of fish. And a few tricks have fish references in them. Strange, isn't it?

The controls now use the Wiimote. What's really cool is that you can either use it vertically or horizontally. I prefer horizontal because you get a more 'realistic' experience and it seems easier, but both ways work just fine.

The steering on the extreme gear (the board/vehicle that you race on) varies. Since there are about 60 gears you can buy from the shop, you can surely find a board (you can choose yachts, bikes and many other racing platforms) that fits your racing style and abilities. Some boards have really neat effects such as the 'Gambler'. The description of the gear is "The perfect gear for riders looking to score rings fast. Win on this baby, and you'll see..." and other unique boards like 'Untouchable' which is an absolute speed demon. 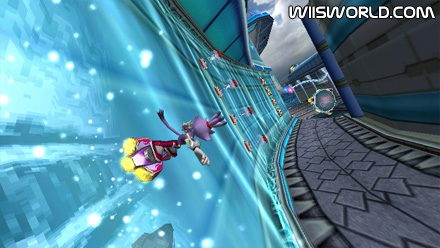 To even further your racing experience, there are 18 playable characters to choose from. The entire roster consists of Sonic, Tails, Knuckles, Jet, Storm, Wave, Amy, Shadow, Cream, Amigo, Blaze, NiGHTS, Dr.Eggman, Billy Hatcher, Silver, Rouge, MeteorTech Robot (SCR-GP), and finally MeteorTech Robot (SCR-HD). That's a total of 18 characters! Note that the robots do not use boards, and each character has individual stats viewable from the character select screen.

The tricks are now really fun to pull off! There are a lot of tricks you can perform, and you are ranked from C to XX (C,B,A,AA,S,SS,X,XX). Simple to do also, just a flick of the wrist or a twirl of the Wiimote. Another feature ZG uses is air-ride and grinding, similar to Kirby Air-Ride. A brand new concept also exists called Gravity Dive, you go fly up into the air with major speed, and then can do something called Meteor Burst which allows you to bounce off obstacles in midair in order to get insane speed boosts. The 'gravity control' is used for sharp turns, you charge up and turn in the direction you want to go, and then blast off. It also can be used for a speed boost.

The music in this game is really impressive. Some tracks might even be considered memorable (such as Gadget Round and Dive into Gravity), at least I think so anyway. The two theme songs are for Sonic and Jet the Hawk, "Un-Gravity" for Sonic and "Catch Me If You Can" for Jet. Un-Gravity is definitely one of my favorite songs in Sonic the Hedgehog... it's truly superb. Jet's song is also very cool, but not as good as Sonic's. 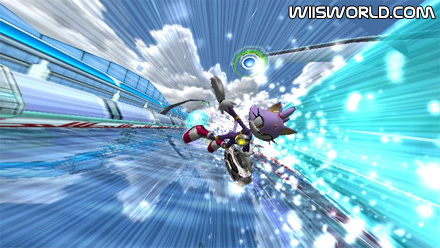 The voice acting is all just recycled clips, with the exception of Silver, Blaze, and all the characters they didn't have previously. The entire cast's voice are still the 4kidsTV ones sadly. Jason Griffith voices three characters now, those being Sonic, Jet and Shadow. He seems to be getting better, I just don't like him VAing Sonic, he does Shadow and Jet fine. Tails' Amy Palant is good at voice acting alright, but her voice just doesn't really suit Tails himself. Dan Greene is voicing Knuckles and he's really great, but not the best Knuckles ever in my opinion. Amy is done by Lisa Ortiz, and does a good job of making her sound whiny. Amy is as much a pest to Sonic as ever in SRZG, same old Amy Rose. The rest of the crew are rather well done, but nothing special.

An unfortunate thing about SRZG is its lifespan; the story mode for both (the Sonic side and Jet side) can be beaten within 5 hours. You also can't race against people over Wi-Fi, but you can download one of the top racer's ghost pack and try to beat their best time from every level. So the replay value of this game is its weak spot. Plus the recycled voices and... Tails' mouth. Otherwise, it's all good.

This is one of the better Sonic games out there, I'd say you should give it a shot. It's an impressive title!

You say it's great and it's a C+? That makes tons of sense. Absolutely. The 1st game was great too. Sonic Phantom isn't the only fanboy here, let's remember that =P.

Quartz, I'm NOT a fanboy. If I was, then I would give all Sonic games a ten. I know that Sonic 2006 was rushed, but I still found enjoyment out of it. I know that the current Sonic games have some flaws, but in my opinion, they can be enjoyed if you give it patience. At any rate, I haven't played this game yet, but I'll get it soon.

I told myself: "Don't read the reviews. Just give the game a shot yourself". And look at me >.< Anyhow, let's stop paying attention to sound and voice-overs and just enjoy the game itself. The soundtrack should have made up for it, somehow, plus gameplay as well; I'd give it a B, but that's only cause I'm "A-Plusing" some of what you said. Haven't played it yet.

I'm a Sonic Fan as well. Leave the Phantom alone.

Do you think Sonic, via WiiWare, could be in Mario Kart Wii?

It doesn't sound likely of Sonic being in Mario Kart Wii, it would just be too strange. He's good for Mario & Sonic Olympics and SSBB but Mario Kart is where I'd draw the line. It's like Sonic being casted for a Super Mario game, too creepy.

Why the hell would Sonic drive a little cart anyways!? He can run on his damn feet and easliy beat Mario and others, hell, he could run circles around them and still win. I'm not a total Sonic Fan but Wii Dude is right, this draws the line.

But if he has feet and all why not make a running racing game instead of having them race on fancy little boards? I also think Sonic didn't have his complete potential in such a cool game like Brawl. I mean he turned into a little ball for half of his attacks and he was a bit slow for being Sonic. Sonic in Mario Kart Wii? In your dreams.

So says the man going by the name "Sonic Phantom". You don't have to rate everything a ten to be a fanboy. I consider myself a Sonic Fanboy, and I sure as hell didn't enjoy Sonic 06, Sonic Labyrinth, and other crappy titles.

Quartz, why do you consider me a fanboy? I play Sonic games, yes, and do I care about who says what about Sonic games? No. I just try them out for myself and see if I like it or not.

I thought Sonic Riders was fantastic. I enjoyed both the first game and Zero Gravity. While it may be a spin-off, it still brings something fresh and exciting to the series.

Well um I think that it's a very great game and that I plan to get once in a while and when I do I will try to learn to play it. I know there's a tutorial on there so I'll try that, even though I liked sonic riders better than sonic riders zero gravity because the controls are easier in sonic riders and harder in sonic rider zero gravity. The story is also short and in the first one it was longer.

I'm going to get this game for my ps2, it looks great.

Sonic Riders is better because when you ride the air it's easy but on zero gravity the air is flat and it's freaken hard. The only person I want to play with is Silver but the freaken boss stage is hard. I mean wave tails and knuckles keep passin me up and it's hard to win.

Why won't they make a sonic r 2 and race on their feet for a while.

Love this game, anybody have some tips for the mission in aquatic city where knuckles does meteor burst? It's hard.

Rags: Ah, Sonic The Hedgehog, speed icon who lately has been under fire for some not-so-stellar games. But I can... read more