A spade is a spade... except when it's a shovel

In recent years, there has been a surge of games funded and developed through crowd-sourcing. This method was made popular after the success of Double Fine's Broken Age, and while not every finished project has been amazing, many of these games have clearly benefited from a lack of deadlines and stifling publisher controls. A clear case is Shovel Knight, having been in development for more than fifteen months under the eye of Yacht Club Games, which consists mostly of ex-WayForward staffers. Shovel Knight largely can be seen as a tribute to the Golden Age of the NES, and while it does not quite reach the mark of a classic, any player who has enjoyed 2D platform titles will love it.

Shovel Knight's story is oddly dramatic for a title which seeks to emulate an NES game. Shovel Knight and his female partner Shield Knight used to be the greatest of all adventurers. However, after making a trip to the Tower of Fate, Shield Knight disappeared and was presumed dead. While Shovel Knight gave up adventuring in favor of garden work (no really), he still holds out hope that his lady love is out there somewhere. Our gallant hero is called into action when the evil Sorceress and her eight knights of the Order of No Quarter start to spread out and cause destruction to the people of the land. With the Tower of Fate open once again, Shovel Knight prepares to face a long journey, still haunted by the dreams of his lady love... 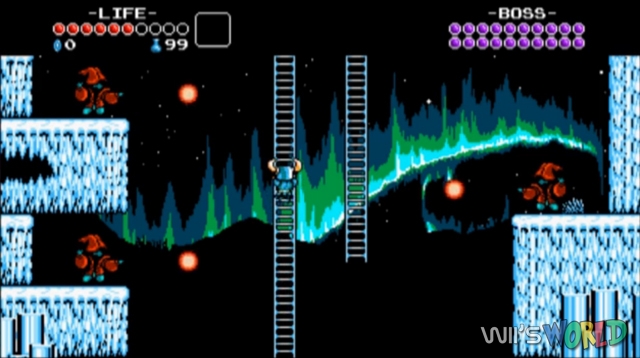 In terms of overall gameplay, Shovel Knight will be almost instantly familiar to anyone who has played the more famous NES classics. Shovel Knight himself initially only has his shovel blade, which can hit enemies, deflect magic fireballs and be thrust downward while jumping. Yes, this game takes more than a few cues from both Capcom's DuckTales and Zelda 2: The Adventure of Link. The world map is taken straight out of Super Mario Bros. 3, complete with Zelda 2 style towns and enemy encounters which randomly change position.

The majority of the game however, is spent in approximately ten stages where Shovel Knight jumps, thrusts and digs his way to a boss. In every stage Shovel Knight can find numerous treasures and quite a few secret areas. While technically our digging hero has unlimited lives in his quest, the game takes inspiration from modern hit Dark Souls by having the player lose treasure if they die. If they die before getting the treasure back, it is gone for good! For those who wish for an additional challenge, the game even allows the player to break checkpoints for additional loot, but at the cost of losing it for the rest of the stage.

When players actually get into the game, they'll see that Shovel Knight's greatest influences were Castlevania and the Mega Man franchises. Shovel Knight eventually gains access to magic weapons which can only be used through a limited supply of relics, and are obviously based on Castlevania's sub-weapons. The game's stages on the other hand, are mostly all built around a theme like those in Mega Man. Specter Knight's stage for example has a new ghost enemy that cannot be killed and later portions are shrouded in darkness with only occasional light. Treasure Knight's stage is mostly set underwater with higher jumping and moving torpedo platforms. Bosses are likewise unique, varying in attacks, size and even stages that can and will often change in the heat of battle. In another nice nod to Dark Souls, bosses become fiercer after being taken down to half health. In addition, four sub-bosses will appear periodically and though they are optional, they each are well worth a fight. 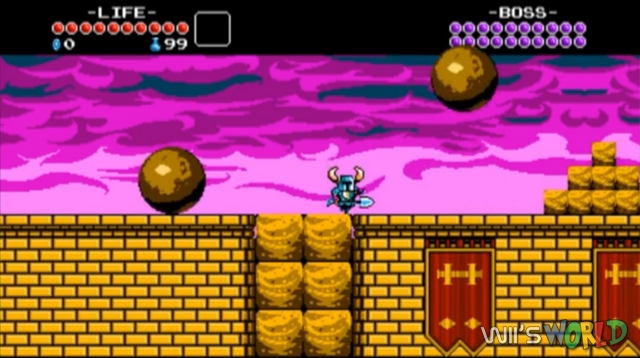 Those who wish for a change of scenery can take a break in one of the two towns. Shovel Knight can use his hard earned loot on health and magic upgrades, new attacks, sub-weapons which players could not afford before and even new sets of armor. Those who comb stages diligently can also find music sheets to give to the town bard. Not only does he then play the song whenever players wish, but also pays 500 gold per sheet. There are also unique treasure stages, which usually require a specific sub-weapon to get through.

Having gold be penalized for losing a life is unfortunately not quite as steep as it sounds however. Though difficult, it is in fact possible to finish the game without any upgrades. Because of this, more experienced players do not feel the same kind of pressure that ironically was found in the Souls series. Also, many of the upgrades gained are not that useful. I have to wonder at the subweapons, too. Many allow for new mechanics and travel to new areas like a Metroid title, yet are entirely optional. Why? This might have made for whole new areas and incentive not to lose gold via death in stages. It feels like a missed opportunity.

For those players who enjoy pixel style graphics, Shovel Knight is an enormous treat. While the game's bevy of colors, effects and animations feel like they were taken from the 8-bit era, the game's own developer has admitted that many of these tricks and colors would not be possible on the NES. Things like rainbow liquid, rain splashing on platforms and a lack of sprite flickering make the game's exceptional graphics even better and are a treat for 2D lovers. 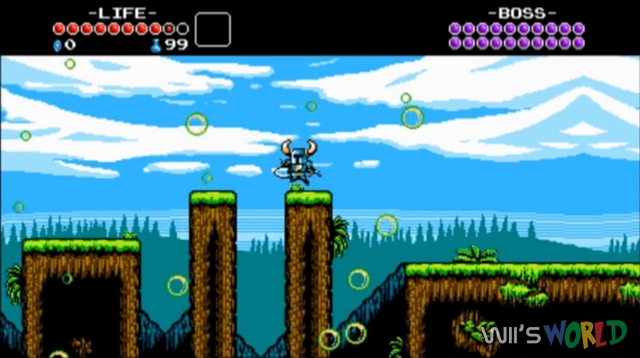 Shovel Knight's sound is exceptional. Nearly every bit of music in the game is great, and is clearly inspired by NES chiptune soundtracks. Every boss and stage has their own unique theme, and players should give thanks to famous composer Jake Kaufman and former Mega Man alumnus Manami Matsume for their contributions. Sound effects in Shovel Knight are also awesome, with many sounding like they were taken from the Master System and MS-DOS era. Modern gamers might find them primitive, but retro fans will find them a treat.

Shovel Knight is a great game, but unfortunately it doesn't last that long. Even when looking for every secret, the game likely will not last longer than six to eight hours, with less for a straight run. Admittedly, this is very good for a game that's only fifteen dollars, but many will want a sequel or more content sooner rather than later. There is a New Game+, but it is really more of a hard mode than anything. Thankfully, Yacht Club will be providing more content throughout the year due to making every one of their stretch goals. Soon to come are a gender swap mode (the male characters become women and women become men), challenge mode, multiplayer battle mode and even playable versions of three bosses with their own stories and abilities. Needless to say, those who enjoy the game will have definite reason to replay it in the future.

Is Shovel Knight a perfect game? No, and in some ways it could be better. However it is fun, full of heart, and is well worth the money. Retro fans will love it, and the game's balanced difficulty may entice newcomers into the fold. While Shovel Knight does not quite reach the classic status of the games that inspired it, Yacht Club has taken the first steps towards greatness and their game is yet another example that crowd-sourcing may be a viable development alternative.