Published by Activision, Developed by Treyarch

Has the Call of Duty franchise finally gone stale?

I have to admit that I am not the world's biggest Call of Duty fan ever since its transition into the modern setting. The first Modern Warfare was great, and World at War was a fine, underrated entry (though it did stray from the modern era and go back to World War II). With Modern Warfare 2 however, the series began to lose its luster and I quickly gave up on playing. It was when Treyarch took the helm with Black Ops that I began to regain an interest, I soon realized they were onto something. When Modern Warfare 3 came out, I passed over it entirely with anticipation for what Treyarch had in store. So, is Call of Duty: Black Ops II the game I had been hoping for?

This latest entry surprised me in a number of ways. I was originally expecting just a straight sequel to Black Ops, which would have been fine enough, but key innovations and Wii U integration delivers more than that. The game stars the son of Mason from the first Black Ops game and switches back and forth between him and missions that involve Mason Senior in the 1980s. The story is truly great stuff. The voice acting is sincere and very well done. There are also a few minor celebrity cameos that fans of The Walking Dead and The Clash and Wrath of the Titans movies will appreciate. The main villain is wonderfully realized as someone that is not just hell bent on destroying the earth, but has a real reason, albeit he goes a bit overboard with his actions. That is part of the fun, though. This villain is someone that you can actually feel for. You understand his pain and anger and how over the years it has built towards hatred and violence. Seriously, great stuff. 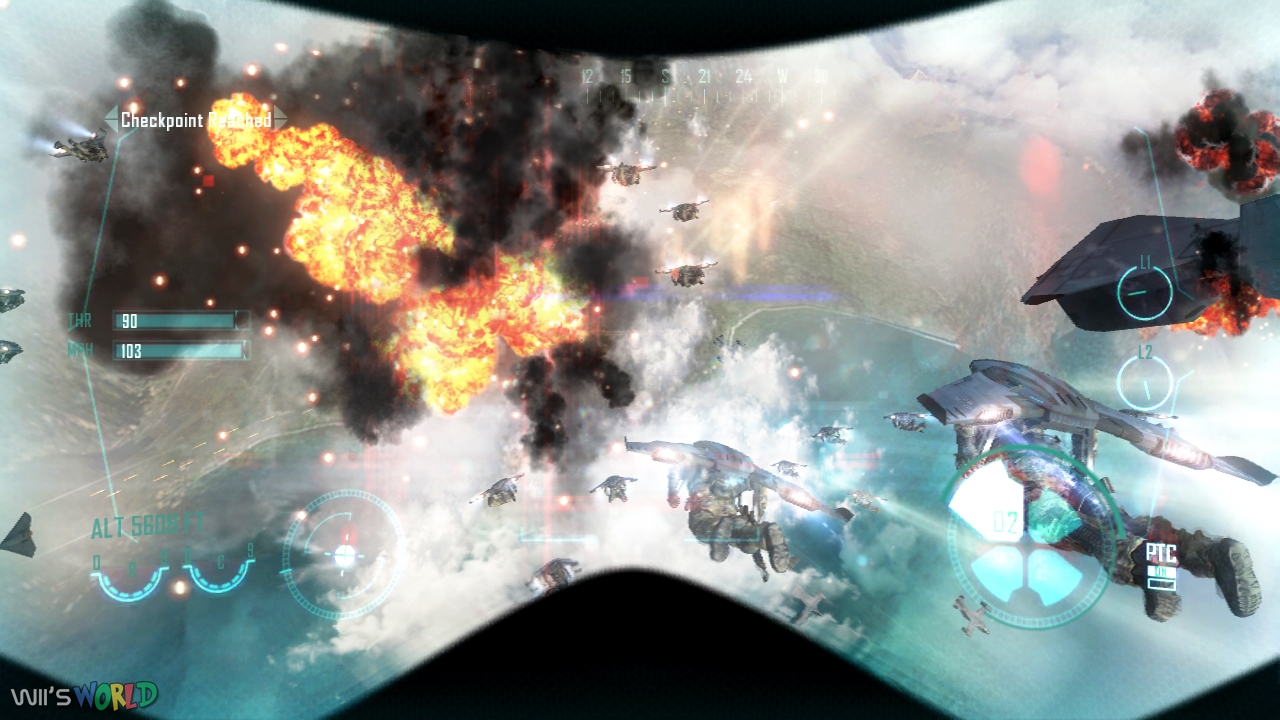 First off, the game plays wonderfully on the Wii U, whether you choose to adopt the Pro Controller or the Wii U GamePad. The remote and nunchuk combination is worth trying as a different way to play, but I would not recommend it for serious competitive online matches as the turning may be a bit of a hindrance. The controls on the GamePad and the Pro Controller are mapped just like the other consoles that you may be used to - seasoned FPS players will feel right at home.

Black Ops II also looks and sounds like its other console counterparts. The game is gorgeous. It is obvious that the the same Modern Warfare engine that the series started with is still in use here. Even so, the game stands out with impressive facial animation and beautiful environments. The animation is also top notch, as is the audio experience. Every gun blast, explosion and airplane strike is wonderfully ear piercing and sounds deadly. There were moments in the game where I just had to take it all in, then get shot in the head and restart at my checkpoint. Still, totally worth it.

The multiplayer is the real meat of the Call of Duty experience, that is why most people play these games. I am more of a single player experience gamer, but even I had a ball playing - and I am not even close to done with the multiplayer. There is a new 10-item equipment set in your load out. This makes for dozens of combinations to create a fighter tailored to your play style and it works really well. This new addition makes for a more immersive and in-depth multiplayer experience. 'Score streaks' replace Modern Warfare's previous 'kill streak' system. This encourages you to earn points any way you can and this isn't restricted to just killing people. It means destroying UAVs, turrets and care package choppers and also assist kills mean more than they have done in past games. The multiplayer here has some serious replay value and I could not be happier. 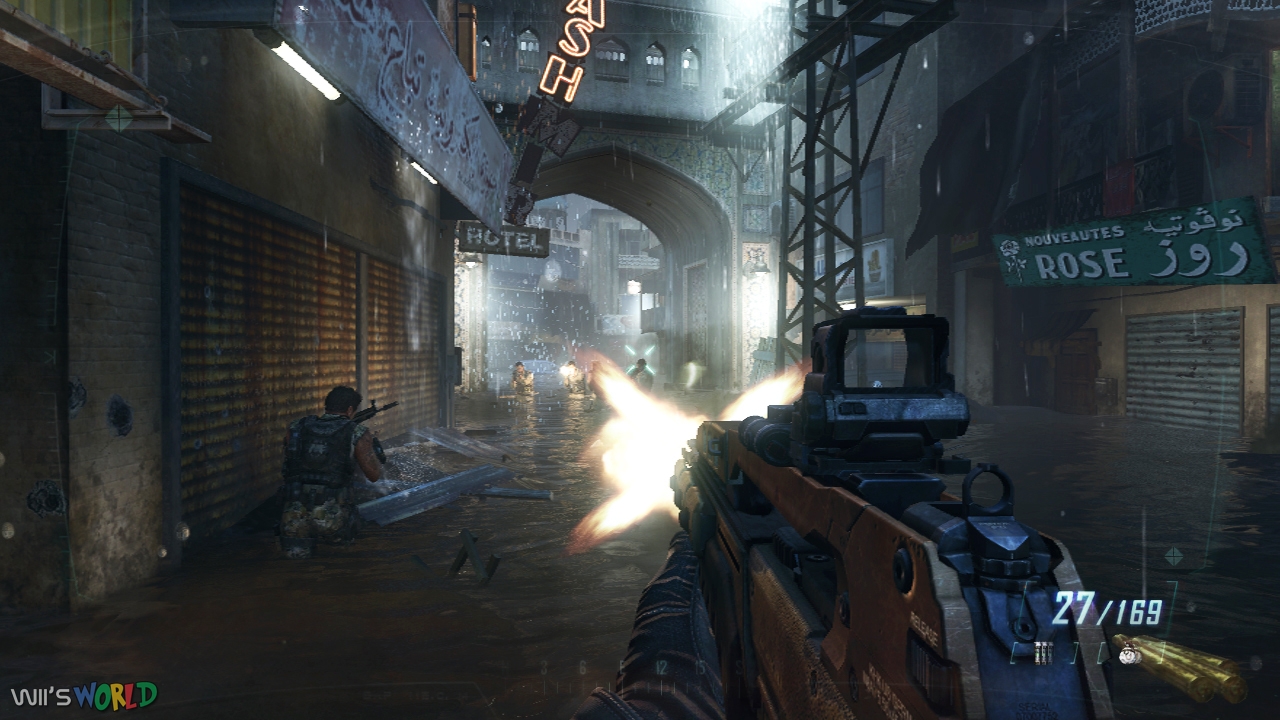 Let's talk about the Wii U specific features. The GamePad can be used for single player gaming, which feels fine. While playing in this way, the second screen is used as a map. A neat function that can be useful. Also, this is one of the Wii U games where you can play using only the GamePad - completely independent of the TV. I found this feature to be wonderful, especially when I wanted to play just one more multiplayer match before I passed out in my bed. Honestly though, the most fun I had with the GamePad was playing team deathmatch in the same room as another person and not having to share screens. I can't believe it took this long for someone to figure out how to do this and it is oh so satisfying.

All in all Call of Duty: Black Ops II is my favorite entry in the series to date. It has an original story which shows off a few twists, a multiplayer that hooks you right in and the great Wii U functionality. This is to me, the best version of the game. The frame rate is silky smooth, the graphics sharp and crisp and it all just feels solid. If you have a Wii U, you will be hard pressed to find a better game for your money.

This review was very helpful. I agree completely on what was said. This person really knows what he is talking about. I would really like to see more reviews come from Rob. Keep up the good work.

I too felt bored with the way CoD headed with the Modern Warfare games, so this makes me excited to try the new CoD game. Thanks for such an in depth review of not only the game, but the Wii U controls as well.

This is how reviews should be written, as an opinion, not stated fact.Reading this really makes me want to head out and go pick up a copy.

Thank you guys for the support. I'm glad the review was informative. I have more on the way so I look forward to everyone's feedback.