New Super Luigi U is Nintendo's answer to hardcore platformer fans who have long felt unchallenged by the usual menagerie of Super Mario Bros. games. With its shorter level design and its 100-second clock, New Super Luigi U is definitely the challenge for which many of these fans have been waiting. As a part of a series that is sometimes described as "childish," New Super Luigi U stands out as one of the most frustrating and fulfilling games since the original. 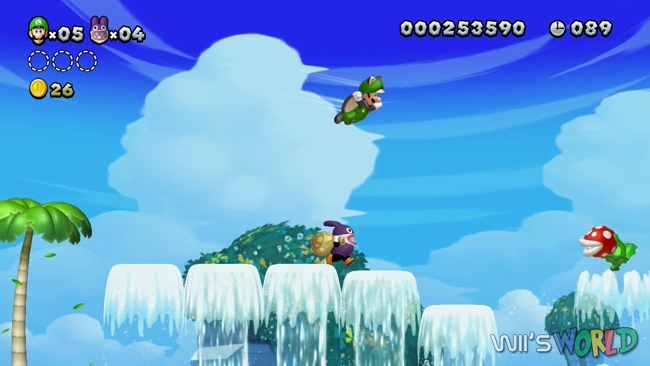 Despite all of the similarities to the original game, New Super Luigi U is definitely an excellent game with 80 new levels designed exclusively with the new 100-second time limit in mind. As players of other Super Mario Bros. games where Luigi is a playable character can attest, playing with Luigi is a very different experience than playing with Mario. With his higher jumps and his slipping when he lands or runs, a more fluid play style is required. Attempting to stop at the edge of a cliff or to land on a thin platform will send the player careening into the abyss. Also, Nabbit makes his first appearance in a Super Mario Bros. game as a protagonist, serving as a playable option in multiplayer.

Like New Super Mario Bros. U, New Super Luigi U has a wide variety of levels, including castle levels and bonus mushroom houses. These mushroom houses allow you to win extra lives or items that can be used before entering a level. These items become incredibly important as the game progresses and being able to glide or spin your way over a difficult area becomes a necessity.

The graphics and audio of the game are very similar to New Super Mario Bros. U. While the graphics look better than any of the previous Super Mario Bros. games, they do not live up to what the Wii U can do. The audio is what you would expect from a Luigi game, but remastered. Bowser's roar and the sound of the vortex surrounding Peach's Castle sound particularly great, whether on a TV or the GamePad. 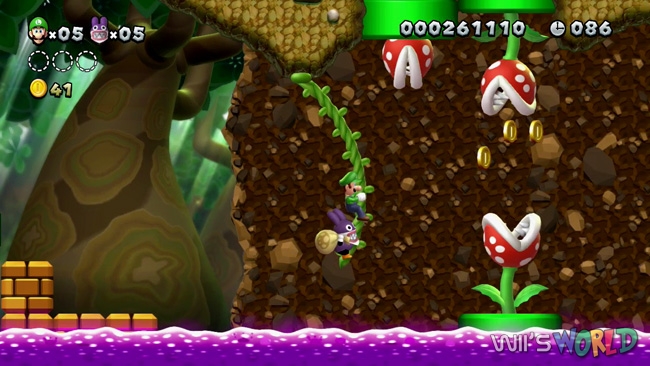 Like all Super Mario titles, this game is meant to be played and replayed, especially if you are one to collect everything in a game. The almost endless collectibles, combined with the co-operative (or competitive) multiplayer, makes for an incredibly enjoyable gaming experience, even if you have beaten a level multiple times.

The use of the GamePad for New Super Luigi U is different than in a lot of other games. In single player, it can be used as a primary controller and as a screen for off-TV play. In multiplayer, it is used to allow one player to set up platforms for the other players, stun enemies, and get the all-powerful star, which allows them to kill an enemy with just a poke of the touchscreen. While this feature definitely removes some of the challenge from the game, it allows for a multiplayer mode that can include players of less skill or experience.

Overall, New Super Luigi U is an excellent challenge mode for hardcore platforming gamers or a couple people looking for an extra challenge after beating New Super Mario Bros U. It is not a standalone game, and I would not recommend trying to play it before beating its predecessor. But, if you enjoy platforming games and want a challenge, this is definitely worth the price tag. Just do not be surprised when you have to play a level a few dozen times to beat it.