There is no raving about these Rabbids.

With the launch of the Wii U and the lack of games thereafter, early adopters have slim pickings when it comes to quality games. There has been quite a lack of new releases and while hesitant, I decided to pick up the latest game in Ubisoft's Rabbids series. The original Wii was my console of choice back when it first released. Along with a slew of minigames came a quirky, fun and downright insane new franchise. As a spin-off from the Rayman series, the first batch of Rabbids games were refreshing and fun. Has the latest installment from the bizarre minds at Ubisoft Paris created another fresh, fun romp or has the franchise become a stale, shoddy attempt to make a quick buck?

Rabbids Land wants to be many different things all at once. Ubisoft hopes to create an engaging board game and provide fun minigames all while trying not to bore you into a coma. This is a halfhearted attempt that consistently forgets that more than two people may want to have fun with this title. 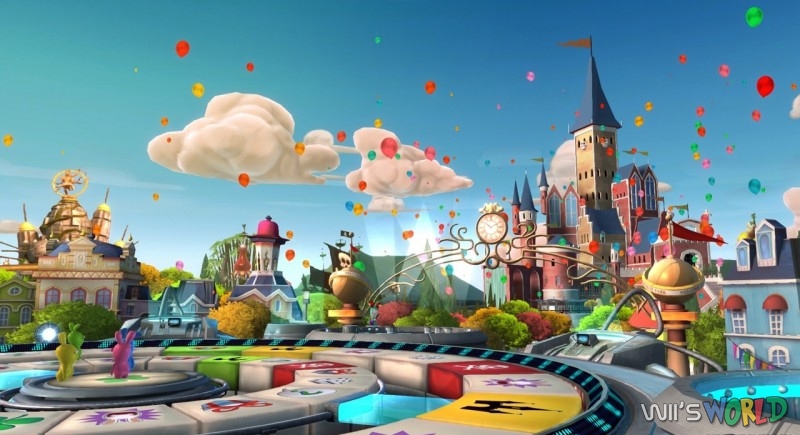 Picture Mario Party, with more involving minigames, minus most of the fun and never let more than two people play at the same time. Sounds fun? Well, for the most part, it isn't. The board game aspect is a neat idea, borrowing heavily from the Mario Party series. Players roll a die while trying to collect trophies, avoid traps and win poorly executed minigames. The board game aspect has a really interesting concept behind it that isn't quite as fleshed out as it could have been. There are a number of special spaces to land on that each give you certain advantages, disadvantages and minigames. My favorite spaces to land on were the trivia squares. The person who lands on that particular square gets asked a question, and after giving an answer the other players have to choose whether the given answer is correct or not. This is a really neat concept that unfortunately overshadows the rest of the game.

Minigames do not appear at the end of a turn like one might expect from past experiences. A player has to land on a square that initiates the minigame and only two people at a time can play. You cannot choose who to play against and the two other people who are not playing are instead fighting to stay awake. In a game that initially sounds like an absurd, entertaining title, there is certainly a lot of waiting. There is no excuse to have this much downtime in a party game. While playing this game for review, I asked friends and family to play, but after the first game, they had enough. It was a chore getting enough people to be bored while playing a mini game collection. That should never happen.

The games themselves are mostly generic with a few exceptions. Cooperative games where players actually work together are quite a bit of fun. Playing as ghost buster (not officially) is almost ingenious. One player has to find the ghost with the Wii U GamePad, while the other player sucks the ghost into a vacuum via Wii Remote. After capturing the ghost, the player with the remote has to aim at the GamePad to shoot the ghost into the screen. That game was truly impressive, but there are less than a handful of similar ones. Most other games consist of simple concepts that have been done many times before and much better. Simple rhythm games, poorly controlled labyrinth style torture and an ill conceived drawing minigame make up only a fraction of the "fun". 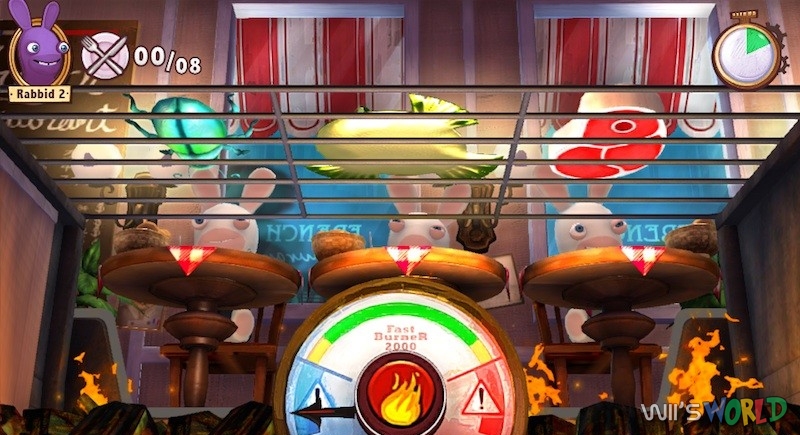 Although the game is not nearly as fun as I would hope, it certainly is as charming and far-fetched as any Rabbids game before it. Rabbids Land is clearly a rushed title as the graphics seem like a slightly upscaled version of an original Wii game. The real catch is in the presentation. While it may not be for everyone, I have always truly adored the Rabbids as characters themselves. Their zaniness takes true form here. The best part about playing the board game portion is watching and listening to the rabbids reaction. Each time a rabbid moves after a roll of the die there's a hilarious animation and scream/yell. From flipping head over feet until they land onto their space to running and screaming as if being chased, the Rabbids actions make playing the board game segments that much more bearable. Also, each minigame has a hilarious intro that warrants at least one view each.

The Wii U GamePad is a mixed bag when it comes to gameplay. Few minigames are brilliant, while most are just a poor excuse to incorporate a gimmick. You can also play some minigames using the GamePad alone, but seriously, I would not recommend it.

One thing perhaps saving this game from being a one-time playthrough is the extra content. By now, I'm sure you can tell that I am a fan of the Rabbids as actual characters. By collecting coins in the minigames you can unlock brief videos of the Rabbids performing their silly antics. Most of them are very funny and make me want to endure countless hours of poorly executed gameplay just to unlock more. Obviously, the Rabbids as characters do not appeal to everyone. If you find them hilarious, insane and somewhat adorable, then you will definitely find joy in watching these videos.

Rabbids Land plays like a half baked attempt to cash in on early Wii U adopters and the drought of new, quality releases. While there is certainly a charm and a bit of fun to be had, paying almost full price for a game that feels incomplete is a ripoff. Rabbids Land could have and should have been so much more. Take that fifty dollars and buy the three previous Rabbids games for the original Wii. You will assuredly have a much better time.

This game sucks!!! It is a ripoff of Mario Party. It has a few mini games The booing from the lucky rabbid sounds fucking horrible The swallowing is disgusting like they??re eating trophies and presents These mini games suck! You only have 2 players instead of all 4 And even worse! The lucky rabbid can zap and kill you if you are in 4th place! Fuck this game!