A solid game despite its simplicity.

Scribblenauts Unlimited was born upon the premise that you can create anything you can imagine. This game has an enormous vocabulary of words as well as an object editor to make your ideas a reality. 5th Cell, the developer of Scribblenauts Unlimited, really has done a fantastic job of incorporating nearly everything imaginable into the game.

The story follows a boy named Maxwell, who has a notebook that magically creates any object he writes in it. Maxwell's parents decide to send him with his sister Lily to the city, to experience the real world. On their way there, the siblings encounter an old man. Maxwell pulls a trick on the man, giving him a rotten apple. In anger, the man puts a curse on Lily, which will gradually turn her to stone. Maxwell must use his notebook to do good deeds for others in order to receive Starites, which can be used to save Lily. The story is quite simple, but it is presented well. You could say the story takes a back seat, but in a cartoony, light-hearted game like this it doesn't really need to shine. 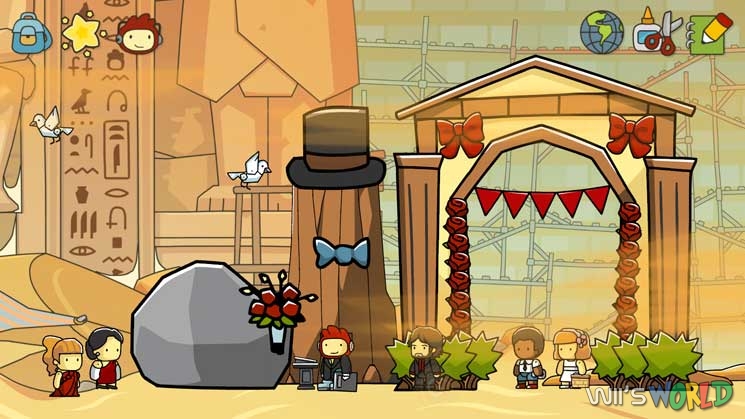 The gameplay revolves around helping other characters complete various tasks by creating an object or adding an adjective to a nearby object. The great thing about this mechanic is the vast number of ways to solve a problem. An early example of this takes place on Edwin's farm - there is a plant that needs water. The simplest solution is just to create water. A few more possibilities are to create a hose, a flood, or a rain cloud. The main problem with this is that it is so easy to use a simple object to solve the problem, preventing the game from having much of a challenge. Unless you force yourself to avoid the simple answer, you won't have much difficulty beating this game.

Aesthetically, Scribblenauts Unlimited is a very appealing experience. The worlds are vibrant and crisp, taking full advantage of the Wii U's capabilities. The cartoon-like art style is fantastic. The visuals remind me of the direction the Rayman series has taken with Rayman Origins and the upcoming title, Rayman Legends. The music is also beautifully done. Much of it sounds relaxing and friendly, which suits the tone of the game perfectly. When the levels change themes, the music always fits like a glove. The sound effects are also handled to a good standard. The gibberish voices and even the clicking sounds made when typing a word fit very well.

The game also features multiplayer and online modes. The multiplayer allows a friend to join in using a Wii Remote. It is nothing to be excited about, though, as it feels like it was tacked on at the end just to say that the game has multiplayer. Only player 1 can create objects or add adjectives. The online mode is a different story. It centers around the object editor, which can be used to modify existing objects into entirely new creations. These creations can be summoned in-game to complete tasks or just to have fun with. Players can share their created objects with others over the Internet. You can also search for items that others have made and download them to use in your own game. 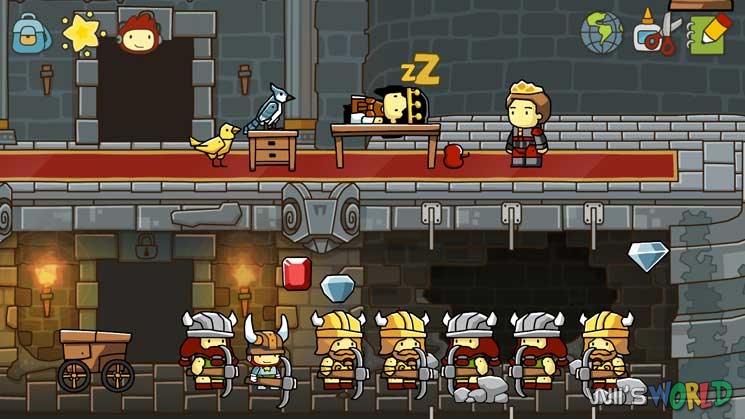 There are other nice touches that help make Unlimited enjoyable. For instance there are a wide variety of characters you can play as. They all have the same capabilities, but it is still good to be able to customize your appearance. There are also a few clever pop-culture references to movies and books, such King Kong and Lord of the Rings. Maybe these things did not drastically improve the game, but they were enough to make me chuckle or remember a moment in the past.

Scribblenauts Unlimited is an inventive game that deserves a place in anybody's Wii U library. It is visually pleasing and has solid gameplay mechanics in place. The simplicity of the puzzles is the only the thing that holds it back from greatness. This is made up for by giving you the power to create anything and truly be unlimited.

AndPerSeAnd: Scribblenauts Unlimited is the newest title in the Scribblenauts franchise. Created and developed by 5TH... read more