A Series of Tubes

What can be said about Ubisoft's behemoth release that hasn't already passed off the pens of every critic who covers this storied medium? After all, this was to be harbinger of a new generation's worth of fresh thinking, a hurried farewell to the troubles that plagued major releases of generations past. And when it hit all major consoles, the general sentiment was tepid, reflecting the reality that yesterday's ideas, themes, and mechanics will prevail a bit further, even when coated in a pretty veil (though not quite as pretty as first promised).

And then the game is announced for Wii U, a final patch of dirt on the coat tails of Ubisoft's prior enthusiasm for a console that has quite thoroughly lost all support from Western third parties. It arrived to little fanfare and less coverage, quickly falling to the depths of retail shelves where licensed and unknown buds struggle for light, unloved and forgotten, not to be joined by more, as Ubisoft quietly exits the Wii U stage. 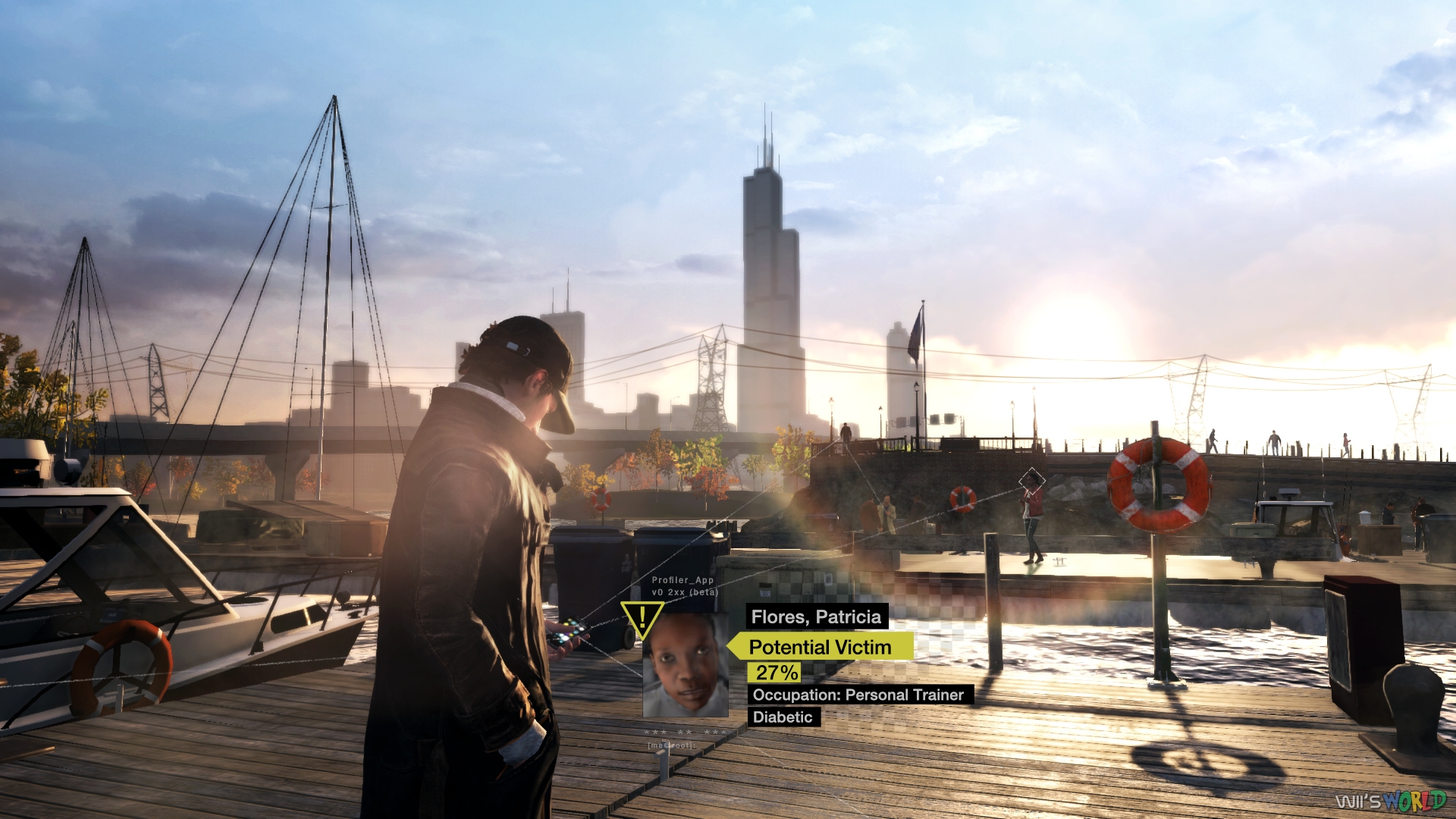 This is context in which this review is being written and delivered. By now, you can likely acquire the game for cheap. For some, its primary value will be of the novelty, a once-titan spat in the direction of a struggling platform, quite likely the last of its kind.

Welcome to Watch Dogs for Wii U.

With contextualization out of the way, Watch Dogs proves to be a challenge to fully encompass. As far older reviews likely stated, it's a game that puts the player in the shoes of underground, lone-man, cybergenius hacker, Aiden Pierce, who finds many a gang, criminal organization, and police force between him and his kidnapped sister after losing his niece in a high speed chase with rival hackers. 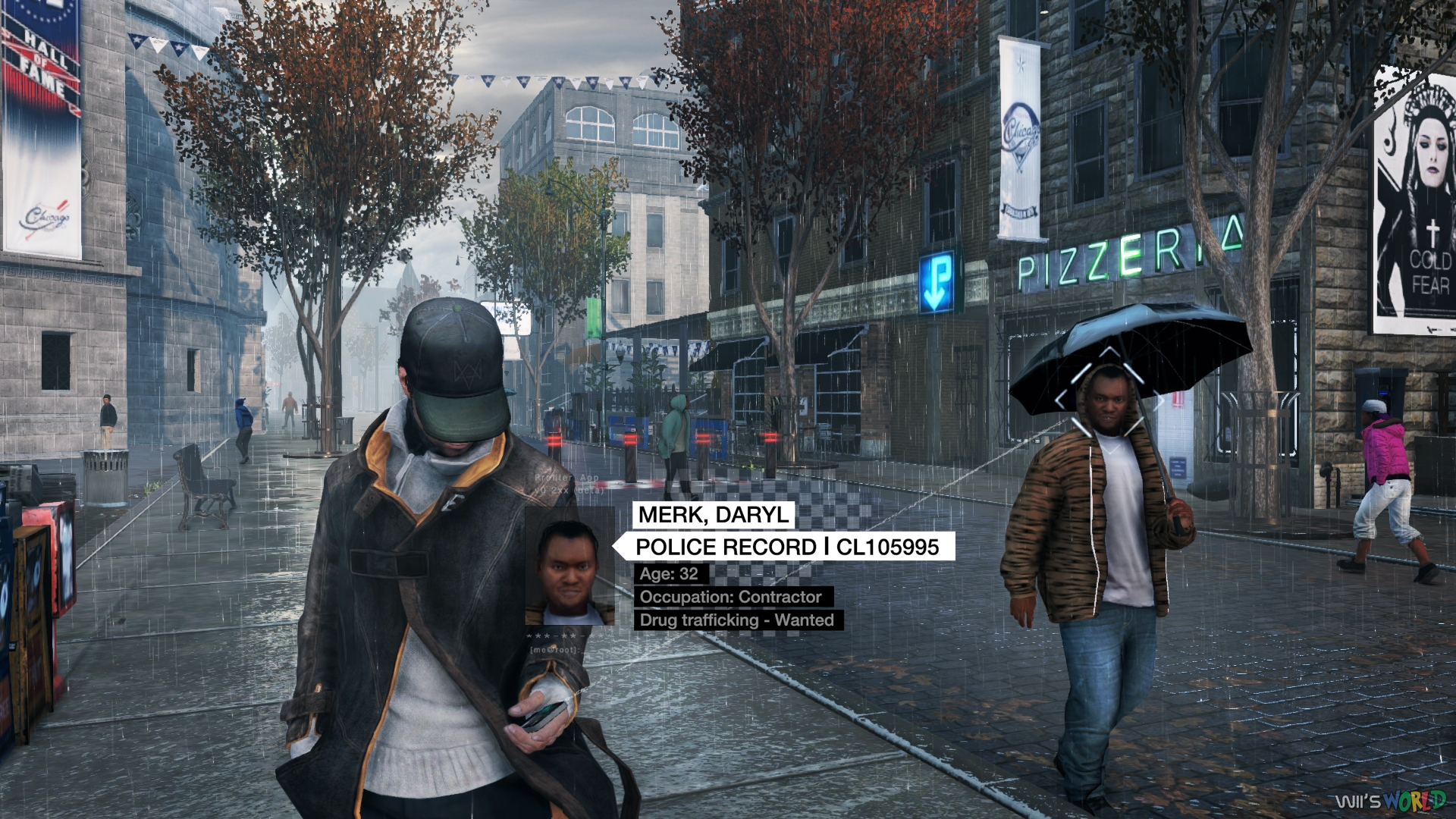 Watch Dogs paints this story in a heavy, grim, and utilitarian interpretation of Chicago. I'm sure Chicago is a lovely place, or at least has lovely places within, but Watch Dogs does it no favors in its presentation. Chicago is rough, corrupt, and easily manipulated by a colorful cast of goons who all play a fictional city-wide services operating system for all manner of unsightly gains.

Speaking to pure mechanics, Watch Dogs fits this setting and setup in an open world that melds together elements from a variety of popular franchises while adding a few unique twists to varying success. While the main storyline missions aren't often mechanically compelling enough to be appreciable on mechanics alone (most pick and choose from a drop down list of run, shoot, drive, sneak, and guide hooks we've seen before), much of the game surrounding these duller missions is often both approachable and inherently interesting.

Watch Dogs has a strong set of avenues allowing the player to interact more intimately with the city itself, from unlocking ctOS access in the city's various areas to eliminating gang presence in specific areas. Not all of these side missions are worth the player's time, as I never once succeeded in actually catching a criminal during one of the morally-questionable profiling missions, often because the solution wiggle room was simply too narrow. Indeed, Watch Dogs is often at its best when the player is allowed a great number of tools to engage with barriers in whatever way he or she prefers. Gang hideouts are especially open-ended, as every plan of attack has advantages and disadvantages, from running in guns blazing at the risk of the enemy calling in reinforcements, to manipulating elements in the environment while huddled in a corner. Often story missions funnel the player into a very specific kind of solution, but at least many of the side missions allow for a greater, more engaging sense of creativity. 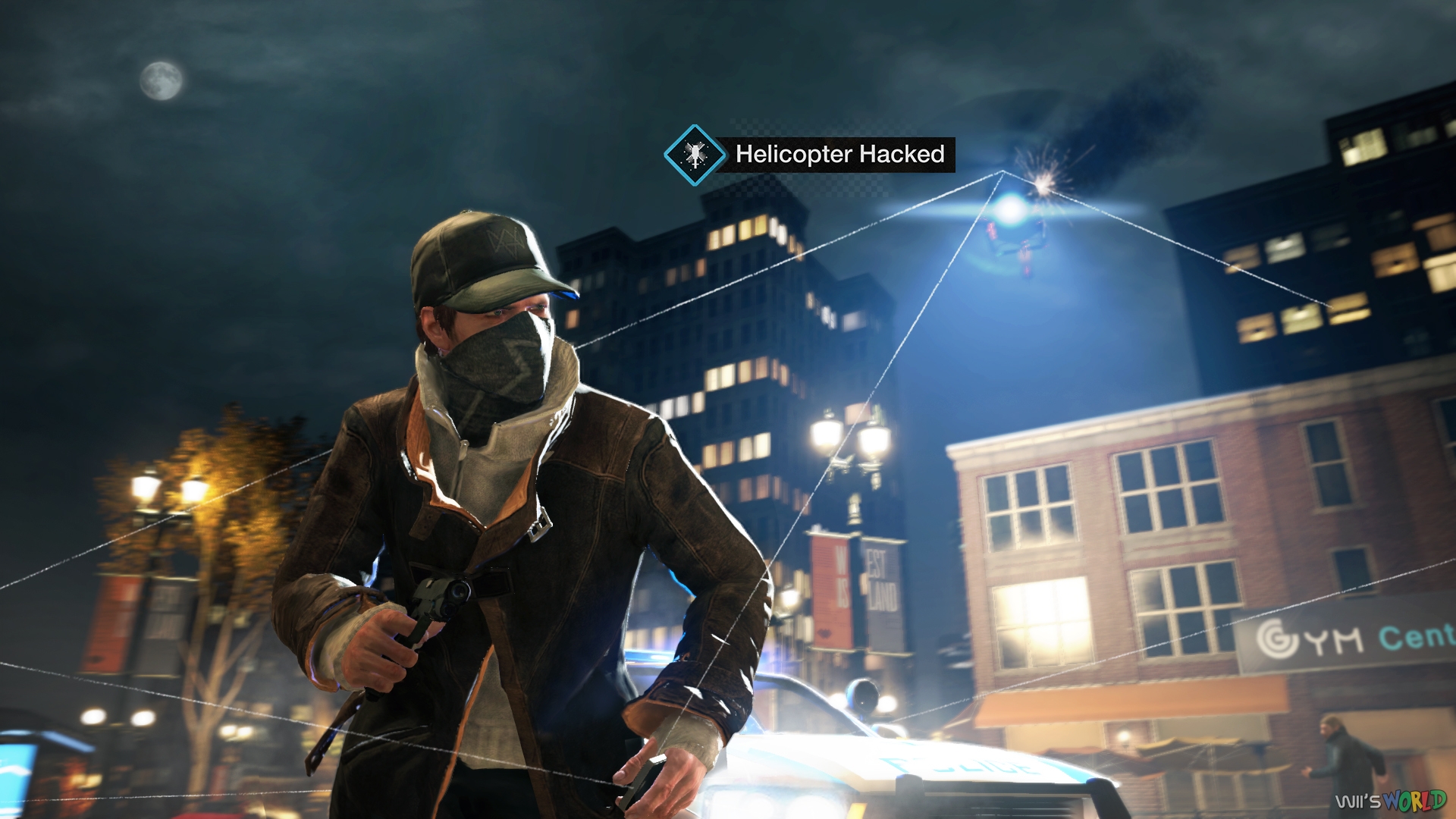 Online features also benefit the Watch Dogs experience. Should the player elect to be involved, they will interact with other players in a myriad of interesting ways. Perhaps the most interesting element is player hacking, in which one player, unknown to the other, attempts to hack another player and make a speedy getaway, all while the victim hurriedly has to profile everyone around him and find the culprit. While it's often annoying for this to interrupt in-game plans.

And completionists will either find themselves overjoyed or completely encumbered by the sheer volume of items and elements that can be found throughout Watch Dog's mean streets. Watch Dog's problems do not arise from a lack of things to do, rest assured. If quantity and variety is what you're after, Watch Dogs will satisfy.

But then come the greater questions about Watch Dogs's value, separate from the sheer number of toys we're given. What of the package and playground they find themselves in? In truth, there are many ills plaguing Watch Dogs on Wii U. And while they don't completely dismiss it from being enjoyed by a certain kind of player, they're worth contemplating. 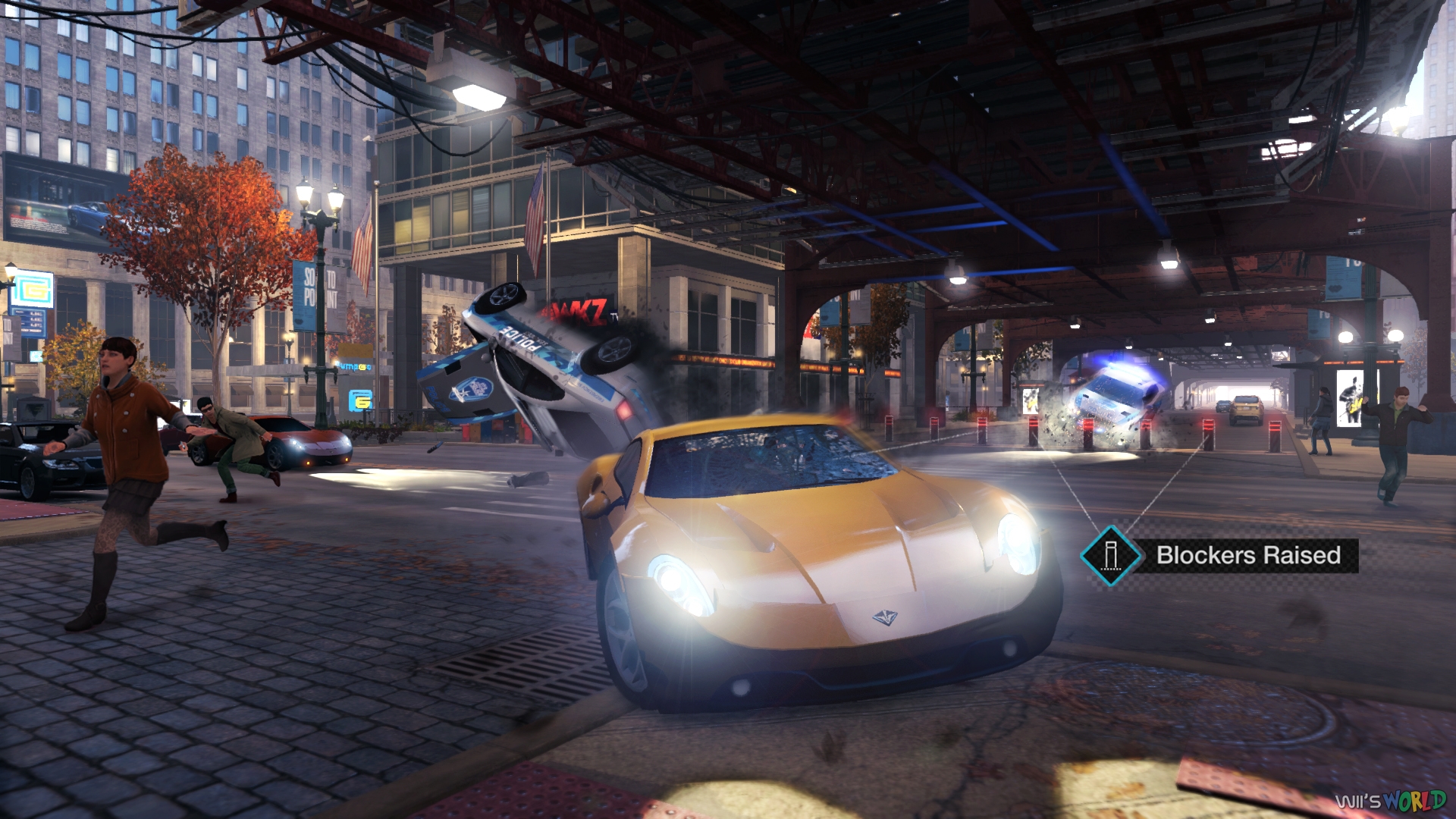 The protagonist, his friends, his family, his struggle - these are not compelling elements in Watch Dogs. Often feeling like an open-palmed beg for emotional attachment, Aiden's internal conflict involving loss and grief occurs quicker than the player could possible develop empathy for, and his attitude is neither entertaining nor relatable.

In addition, there's a strong disconnect between Aiden the character and Aiden the player-controlled entity. While this kind of issue is almost always present in some form in story-driven open world games, it's especially problematic here, as the player is given the freedom to do just about anything, which creates a schism between how Aiden is presented as a person and what he actually does. 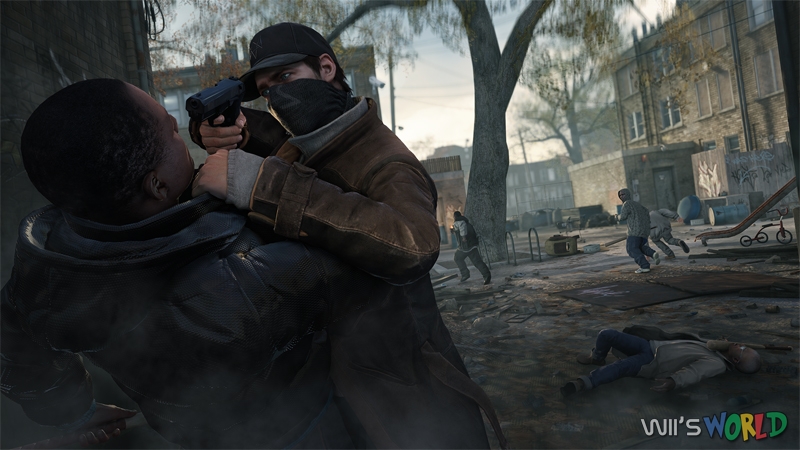 And Aiden is just so unlikable. He hunches himself under a thick trench-coat, pulling out his best Christian Bale whenever he speaks like he was designed meticulously to fulfill every obvious disconnected underground vigilante cliche known to fiction. Why on Earth should we feel compelled to see his story to completion? It's an overbearing, inhibiting mess of an arbitrary conflict that absolutely will not be the reason you finish the game to completion, if you manage even that.

In a world and story that may very well have the same dramatic impact 10 years from now that 1995's The Net has now, we see a collection of self-adorned badasses in trench coats attempting to give our newfound modern connection-focused lifestyles a hard, Bourne-esque edge. It perverts reality in almost comical ways to force a cool, mature, and romantic tone into the very uncool, very immature, and very unromantic world of hacking while only playing with elements that could be recognizable to the most people. 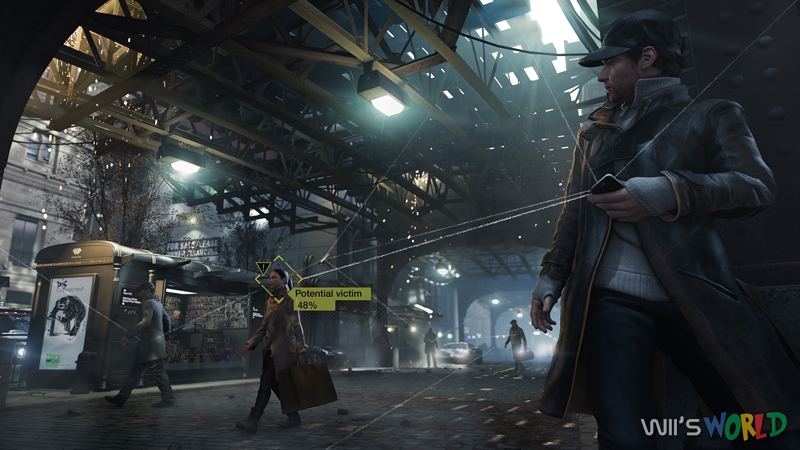 And that's not to say that bending the rules of complex systems and technologies is anything new or necessarily harmful to the world of fiction, but it opens up opportunities for groups, commonly used technology, and subcultures to be misrepresented and construed, making the product feel disingenuous and distant.

If you've waited past the previous releases of Watch Dogs eagerly anticipating a thoughtful Wii U experience, the sad truth is that while the game is perfectly playable on a GamePad, the Wii U port is truly the worst performing version made. Frame rate comparisons show its performance dipping significantly below that of the other versions, even on last-gen hardware, and in practice the drops are still very noticeable. In-game uses for the GamePad, outside of the adequate streaming mode, are minimal, limited to a shortcut mini-map in line with other Ubisoft games on Wii U. 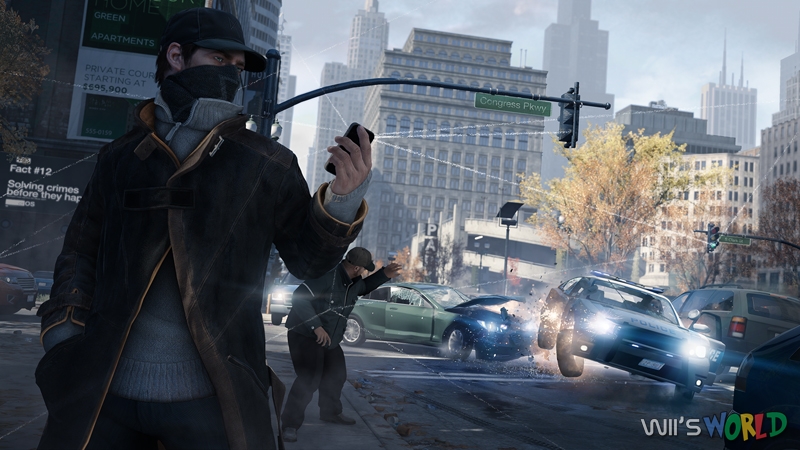 There's also the matter of limiting the number of people you can interact with, since sales are so low there's a sparse few other players online. It's very likely that the online experience is still richly inhabited on other platforms.

With all that said this is simply not the recommended version of this game, and should only be considered above the other consoles if a Wii U is all you own or the GamePad streaming feature is a must-have.

Watch Dogs is, despite everything mentioned, mechanically sound and suitably deep. Everything works, nothing feels undercooked, and there's a lot of layers to keep the player immersed in the world (seeing snippets of information for every encountered NPC is an enriching mechanic, even if not immediately useful). All of the expected benefits of a big budget are here, with well thought sound-design, well-tuned controls, and a consistent (though somewhat atonal) art direction maintaining a high AAA standard. But it's covered in a thick, viscous layer of sludge that keeps the shinier moments from truly glistening. I can't say I didn't experience exceptionally fun segments scattered throughout my time in Watch Dogs, and no doubt so would you, but it's not the title to beckon a new era, as we once thought, and it may force you to suffer through impenetrably unfun slogs. As long as you aren't offended by its dull portrayals, uninteresting conflict, and resentful protagonist, you should have a moderately okay time. And that's certainly a cleaner bill of health than many games can hope for.