The old days were never this bad.

Retro gamers rejoice. Bit Boy, an arcade game from bplus offers a trip into the history of video games, from their early origins right up to recent times. Each of Bit Boy's six stages represents a generation in gaming hardware: 4-bit, 8-bit, 16-bit, 32-bit, 64-bit and finally 128-bit. You essentially play the same game all the way through, but each era adds its own take on things. As you progress, more advanced color palettes are used, better sprites, and towards the end 3D models with texturing.

This is an interesting idea for sure, but I'll tell you right off the bat, the implementation is sorely lacking. The problem is that when the core game is a badly made Pac-Man clone, it sucks no matter which era you're in. The hero of this charmless effort is a square called Kubi, who later turns into a cube when technology allows. All his pals have been kidnapped by an evil space invader from the past, you know the rest. The storyline isn't laid on too thickly, aside from one intro screen you're straight into the action. 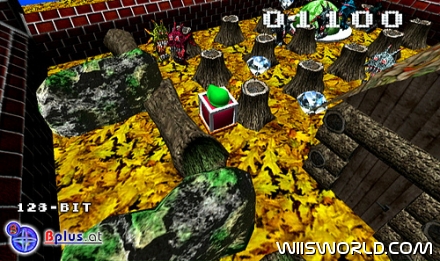 If action is the right word. The game chugs along at a pace that feels too slow and clunky. Two methods of control are supported, both of them using the Wii remote alone. The first, and most practical, is to use the Wiimote on its side, controlling Kubi's movements with the D-pad. A more novel approach is the "joystick mode", where you place the remote vertically on a solid surface (or your leg), and move it like you would an arcade stick. It works, but you lose some of the responsiveness. The Classic Controller was made with these old school games in mind, a shame then that you can't use it, as horizontal Wiimote isn't all that comfortable if you ask me.

At the start of each level, Kubi is dropped into a maze. Somewhere not far away there will be an evil hive spawning enemies. If you come into contact with one of these, you lose a life. Most of the mazes are thoughtlessly slapped together and have a lot of long dead-end pathways you will need to take, making run-ins with baddies frustratingly inevitable. The intelligence of these creatures is also questionable, as they often seem to get stuck in small loops.

To counteract the sloppy level design and poor AI, Kubi has a weapon he can use to get out of sticky situations. The weapon kills all adjacent foes, but can only be used a handful of times before it expires. 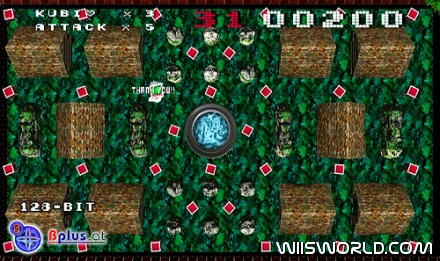 Retro games aren't about graphics per se, but that's not to say they shouldn't convey some kind of style or personality. Bit Boy has neither of these, the sprites and environments are generic looking. You could say the earlier stages (4-bit, 8-bit) are at least authentic, but the background textures used in later areas are a real eyesore and get in the way of what little gameplay there is.

What's also missing is any real challenge. From start to finish, you'll be seeing the end credits in under an hour. Each stage has a high score table associated with it, don't expect anything cool to happen if you top them all though, I tried.

Small graces come in the form of sound and a second mode of play. Although Kubi makes a screech noise with every move which may grate, some of the music is chirpy. "Warp mode" adds some much needed speed to the game, but the experience still grows dull quickly.

Bit Boy feels like a cheap title, made with minimal effort put in across the board. I'm hard pressed to think of anything I particularly like about it. Your mileage may vary, but to me it's thoroughly devoid of anything that makes a game fun or interesting. 600 points deserves to get, or go towards, something a lot better.

This game is an utter turd. Avoid it at all costs.

This game is one of the worst things to be released on wiiware in a long time, and that's saying something.

Sorry Friz, but you are wrong! Only the register size of GPUs has reached 256 bit. CPUs still have 64 bit processors at max.