Furry Legends, from Polish developers Gamelion would seem at first glance like a bland cookie-cutter 2D platformer intended only for kids. However, take the time to explore and play the game and you'll discover a surprisingly difficult and clever title.

One thing must be made clear. This is Furry Legends: Episode 1. Following in the successful steps of Telltale Games and their episodic format, Furry Legends joins upcoming titles such as Rayman: Origins and Hydrophobia in that it's the first of several planned installments over a series of months, with each subsequent episode adding new levels and features. 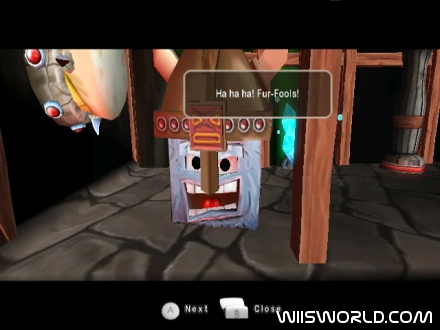 The story of Furry Legends initially seems silly and nearly as mindless as those from the NES and SNES era. The basic plot is that the Furball species, distant cousins of the Star Trek Tribbles, have their kingdom being invaded by the Squaries - stone blocks who could be mistaken for the cast of Boom Blox. The player alternates between three different Furball 'champions' who seek to stop the Squaries from taking over their kingdom and the world.

After starting to play, it becomes apparent that the game has a very tongue-in-cheek approach to itself. Frequent corny puns such as 'What the Fluff?' come out when the characters talk during cut-scenes. The characters break the fourth wall quite a bit (one character mentions how the crabs have no 'sadness' animation), frequent references to other games abound and the whole thing has a bizarre yet compelling quality similar to Monty Python or Terry Pratchett's Discworld novels. While the surface is light and innocent, Furry Legends soon becomes something that amazingly can be enjoyed by both kids and adults.

The game itself is a 2D platformer that can best be described as Sonic the Hedgehog meets Rocket Knight Adventures. Players control three different Furballs, which again, resemble the Tribbles from Star Trek. All three can jump fairly high, move by rolling and attack by slamming into things. The attack is similar to the homing attack used in the more recent Sonic the Hedgehog titles. Players hold the Z button to anchor their Furball in place, use the analog stick to aim and shake the Wiimote to launch the character. Because of this, your aiming must be fairly precise and some gamers may be frustrated. The controls take time to get used to, but after an hour or so it becomes second nature. Also, players cannot launch themselves continuously and must wait for a stamina bar to recharge before once again attacking. The combat requires patience, evasion and good reflexes. Some may be turned off by this, but those who stick with it will be rewarded. 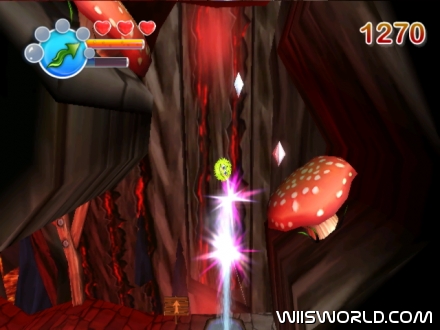 The individual Furballs only have two things which separate them from one another. The first is their color, as there is a yellow, blue and orange Furball that you will play. The second and more important difference is in their special ability. Each Furball has a blue energy meter which can be replenished by eating red fruits. These fruits constantly regenerate and power each character's unique special move which comprise of a speed dash, the ability to slow down time and a power to break through stone walls.

The game is also similar to the later 2D platformers of the Playstation era, including Tomba! and Klonoa. Rather than just having players go from the beginning of a stage to the end, multiple paths must be traversed in order to make it. Players have the option of collecting diamonds and Furry tokens, both of which give real benefits. The diamonds award extra lives and an extended ending to the game, while the tokens add to the amount of life hearts the player has. Some of the platforming sections can be surprisingly difficult, and though old-school platformer veterans will welcome the challenge, kids may be discouraged from finishing the game.

The game features only five levels, but each level is both lengthy and difficult. Thankfully, checkpoints are regularly interspersed throughout these levels, yet it will likely still take players four to five hours to finish the first episode. These five levels are all based in the same 'area', a tropical forest with the occasional volcano. While you could argue that the lack of variety hurts the game, it is more than likely that future episodes will take place in different areas and this is only one 'world' of the complete experience. 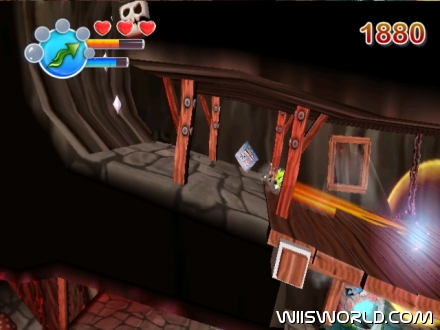 Visually the game is quite nice. The textures are simple, yet smooth, the animations are expressive and lifelike and the frame-rate rarely, if ever, drops. The visual style complements the game's humor fairly well and it feels more surreal than simplistic. The music is instrumental and is good, but there aren't any particular standouts.

The game lasts four to five hours and for 1000 Wii points isn't a bad value, especially with the surprisingly good humor in the game. Furry Legends: Episode 1 clearly shows that this series has a lot of potential; just be prepared to die while you're laughing.

Sounds like my kind of thing, here's hoping it gets released in Europe within the next couple of weeks.

Sounds great. Waiting for the release in europe.