Normally when a liked game receives a sequel, it usually is something that fans of the original title can look forward to. The designers can improve upon their original ideas and add new ones to enhance the experience. Unfortunately, Heavy Fire: Black Arms is not one of those games. In fact, it is one of the few sequels that not only doesn't change or improve upon the original game, but in fact is worse than its predecessor.

Whereas the first Heavy Fire took place in Somalia, the second takes place in South America on another mission to eliminate terrorists, supposedly another group of the same organization in the first game. However, due to the similar jungle/swamp/Vietnam terrain and the 'black' in the title, it is likely that Black Arms is trying to cash-in on the success of Call of Duty: Black Ops. Most who purchase or even look at the title won't be able to distinguish it from Hollywood's Vietnam, so the only real reason to have the game set in South America would be to avoid any possible controversy. 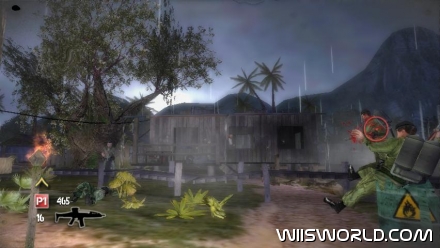 The gameplay is essentially copied piecemeal from the first title, with no discernible differences. The whole thing is still a light gun arcade style affair, with the only real difference being that players will rarely use the motion controls of the Wiimote to perform actions like climbing up torn bridges. Other than that, you still shoot everything in sight, enemies still get exclamation marks over their heads when you're in danger and you can still get point combos and extra for destroying property and vehicles. There are new flamethrower enemies, but they are sadly part of the sequel's biggest flaw over the original.

In the original Heavy Fire, the first few stages weren't too hard, but by the last few the difficulty took a noticeable jump making for uneven difficulty. As if this weren't enough, players were only given one life and three continues, with only three hits before you died. While Black Arms gives the player two extra continues, a much bigger problem has come up. If players get through the first stage, they'll eventually notice that starting in the second stage, enemy fire will come literally out of nowhere, bringing players closer to death. When a player literally can't see who is shooting at them and when, that's simply bad programming or lazy design. It's frustrating not because of difficulty, but because it is genuinely unfair.

Once again, the sound and music are bare bones. There is still no music save for that at the title screen, and the sound effects are taken entirely from the first Heavy Fire... with the exception of the middle eastern gibberish. 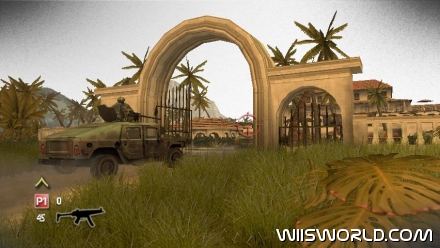 The one improvement Black Arms seems to have made over the first is in presentation. The graphics do look slightly better, and there is more of an effort to make elaborate set pieces, including an 'Apocalypse Now' inspired boat ride at the beginning and a jungle bombing affair. Unfortunately, a genuinely confusing aspect of the game has to be addressed due to presentation issues. If the player is trying to stop terrorists in South America, why do the enemies look like American-attired troops? The outfits, hats and camo look like something straight out of American military and it's genuinely strange. Maybe this reviewer simply isn't well-versed in military fatigues, but it is a point that has to be addressed.

Heavy Fire: Black Arms, like its predecessor is available for only 500 Wii points, yet even at that price the game is a rip-off. The original title was slightly frustrating near the end, but it was at least slightly balanced and manageable. Black Arms is simply unforgiving and badly designed and is not worth your Wii points.