Karate Phants: Gloves of Glory from Snap Dragon Games has the distinct honor of being the first all-out fighting game on WiiWare. It draws inspiration from a German comic series known as Ottifanten. The characters are all elephants.. albeit elephants with short trunks, six packs and a diverse set of karate skills.

Initially there are five phants to choose from, each representing a nation (USA, Germany, Russia, China and Japan). Similar to Street Fighter 2, the characters use their country as a "home stage". This is certainly a game that doesn't inundate you with options. You pick your fighter, then a location, and you're off. No other modes, no control options, no difficulty settings, no nothing. That's when you realize you're probably in for a fairly bare-bones experience. 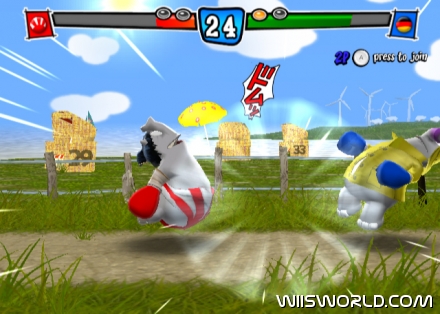 Visually the game gets off to a promising start. Some of the stages like the Japanese Dojo and German countryside are vibrant and look good. Others are less interesting, empty with bland textures. Sadly the environments are just planar backgrounds, there's nothing you can damage or use to gain an advantage in your brawling. The character models aren't bad, the phants themselves have a shine to them, as if made from plasticine. Unfortunately, even with their clothes and accessories, they all look too alike (except the unlockable hairy one). When the gameplay revolves around staring at two characters on a screen, they need to have a lot more personality than this.

A humorous approach is taken to the violence, often times when damage is dealt you'll see a noise bubble appear "BAMM!", "CRACK!" etc like in the old Batman shows. You won't find any fatalities here. In fact when you win a round, your opponent doesn't even fall over or make an expression. A message simply pops up on the screen saying "Red won". That takes me back to the point about the characters being generic, they don't even have freakin' names. The two fighters are distinguished by the color of their gloves.

The music is good, but it's reused a lot throughout the stages, played with slightly different instruments to better fit the setting. Each phant jabbers a noise or short phrase in its native tongue, which also gets old quite quickly. 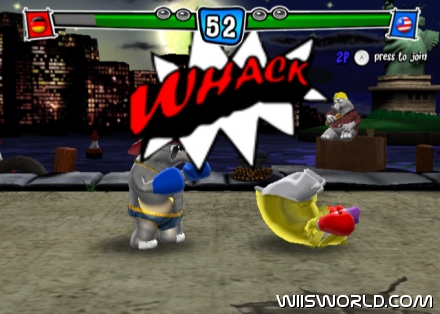 The developers have taken a novel approach to the control system. Everything is done using the Wiimote. You do have some control over your movements, but the two phants will naturally gravitate to a set distance apart from each other. Having the character move on its own like this will feel alien to anyone who has played these kinds of games in the past and it takes some getting used to. Personally I felt it would have been better to move using the Nunchuk's control stick, but I guess they're targeting gamers of a more casual persuasion. The phants have an array of moves, including two jump attacks, "trunk whap", standard punch, uppercut, block, a spinning attack and a special (invariably a kind of dash across the screen, some of them badly animated). There's also a throw, but making it happen is not worth the effort or risk.

Attacks are performed by simply flicking the remote in a certain direction, e.g. up for an uppercut. The controls work, but they don't feel particularly responsive. Also the action on screen feels too floaty. Characters often just bounce off each other like balloons, or when you fail to connect with a special move you're left bobbling around in mid air for a few seconds.

The moves are simple enough to learn, but you won't need all of them. When I started up this game for the first time, seventeen minutes later I was watching the credits roll. That's not a testament to my own skill, just that the AI opponents are very easy. The main game.. the only game for that matter.. consists of picking your character and fighting around the world until you've beaten them all. In addition to the starter five, there are also two characters you can unlock simply by reaching the end twice. There is extra value in playing versus, where you can take on a fellow human being, though it's unlikely to be something you'll come back to often, if at all.

Younger gamers might enjoy Karate Phants for its fun visuals, but it is, in all, a shallow experience. If you're set on getting a beat 'em up without spending too much, you're better advised to browse the Virtual Console library.