When Mega Man 9 was unveiled to the public a few months ago, it was met with a kind of sharply divided reaction that would make the United States' donkeys and elephants proud. On the one hand, mature purists felt that the game was going to be the holy grail of downloadable games, offering the closest thing to truly 'retro' gaming that any new title is capable of. On the other side of the fence, people felt that Capcom was taking the series backwards, effectively preventing themselves from applying any significant additions or evolutions to the Mega Man formula. So did this turn-back-the-clock experiment work? Has Capcom really done something unique and awesome, or has their production committee just given themselves an expedited invitation to psychiatric evaluation?

If there's anything to say about Mega Man 9, it's that the game is practically dripping in the essence of old-school. From the goofy storyline presented through sprite stills and broken text, to the 8-bit sound that is limited in the amount of treble tracks it can handle at any single moment, long-time gamers will get a rush of deja vu that they simply won't experience with any other title out on the market. Capcom has done everything possible to make this game look, act and feel like an 80's NES cartridge. Aside from a few modern features like online leader boards and downloadable content, it's so authentic that the lay observer will have a tough time believing that this game is only a month old. 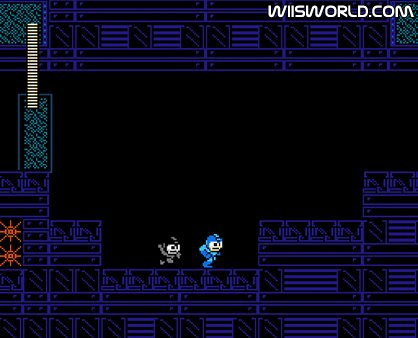 Gameplay is classic Mega Man, for better or worse. This means you get eight boss stages that can be tackled in the order of your choosing, followed by four successive Dr. Wily stages. Once you get into doing speed runs, the game can literally be beaten in 35-45 minutes. Back in the 80's, it was tough to fit much more game time onto a cartridge, so to extend the product's lifespan, they made games tough as nails to prevent players from breezing through on the first try. Mega Man 9 follows this formula faithfully. You will die, a lot, until you know enemy placement like the back of your hand and your reflexes are sharpened to a T. For some people out there (read: old guys), this is as good as video games get, and to argue differently is to set yourself up for some serious lecturing. For other people (read: younger gamers), the immense challenge and short length is going to be an enormous turn off, like a boring class trip to the museum.

The game is bolstered by three elements prevalent in online-enabled games today: online rankings, downloadable content and challenges. Online rankings show top 10 lists of the best speed (timed) runs, both for the entire game and the individual levels. The challenges are self-explanatory, as you've undoubtedly seen these in many games before. Mega Man 9's challenges are noteworthy because some of them are exceptionally difficult (and a few are exceptionally wacky), giving even the most hardcore of the hardcore something truly challenging to shoot for. The downloadable content, at the time of this review, is currently unavailable. The list of content, however, seems promising, as players will be able to spend only a few hundred Wii points to acquire things like additional characters and game modes. For the full list, see my reply to the Wii's World news update on Proto Man being available as DLC.

Graphics are, for lack of a better word, awful. Most areas feature no backgrounds at all and characters are limited to a few static animations. Capcom even went so far to include an NES-like sprite flicker (though this can be turned off in the game's options menu). But can you fault awful graphics when they are so obviously intentional? After all, it can't be called a retro-themed game if it doesn't look the part. Again, this is going to separate the men from the boys. If you grew up with this technology, you're sure to love the inevitable trip down memory lane. If you're a younger guy who was bothered by the 2D perspective of New Super Mario Bros., the graphics are going to drive you bonkers (in a bad way) and possibly leave you with an epileptic fit. The sound is just as elderly as the graphics. It should be noted, however, the awesome musical compositions that many gamers associate with the Mega Man series are in place here (wait 'til you hear Tornado Man's stage). The character art is also very faithful to the series, and many classic designs make their way into this game. 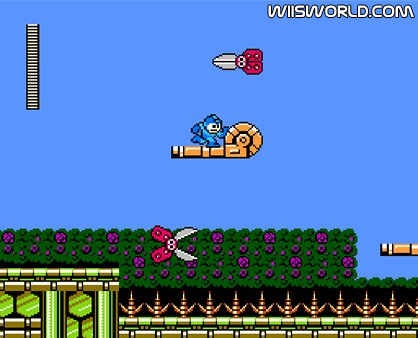 So, if you're unsure of whether to download Mega Man 9, think back to your initial reaction when you first heard about it. If you salivated at the thought of returning to an era of gaming that predates things like HDTVs and wireless internet connections, then you will find more than your money's worth here. The Mega Man formula is loved by a great deal of gamers out there, many of whom still play the originals on a regular basis. It's fully intact here, with hardly any alterations or changes to be seen. The extra content is icing on the cake, and they vault the game's value well over the 1000 Wii points it will set you back.

If your cup of tea is something more technologically advanced, however, you're probably going to hate Mega Man 9. It's graphic and sound engines are almost as old as you are, and the gameplay is simply unforgiving, like a cranky old war veteran who thinks that draft dodgers are pussies. Seriously, if video game history was as long as the planet's, then Mega Man 9 is a big T-Rex bursting into the 21st century. Some people will run away scared, while others will flock to see the spectacle.

Personally, I find this to be one of the most awesome things to happen to video games in 2008. Mega Man 2 is, in my opinion, the pinnacle of the series, and this game comes in as a close second. I love everything about the package, from the terrible graphics to the rockin' tunes, to the fiendishly tough gameplay and the presence of challenges, leaderboards and DLC. You can really tell that this was a labor of love for the developers, and a lot of care was taken to create the most authentic classic Mega Man experience possible. If we are lucky, this will start a trend of 'new retro' downloadable games. 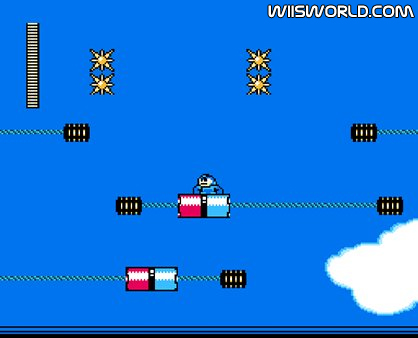 C'mon Nintendo, we've got Mega Man 9, and now we are ready for Super Mario Bros. 4?

Super tough, but it's Mega Man, so would you expect anything less? Cut this score in half if you hate old video games. 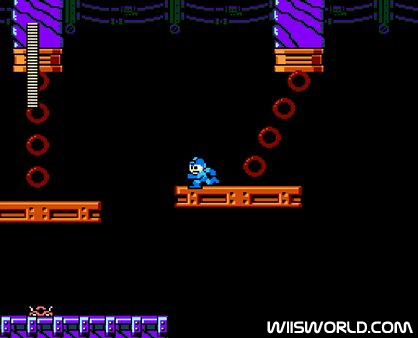 There's a reason people still play Mega Man 2, and that reason carries over to this game as well. Extra content, especially challenges, send the lifespan through the roof. 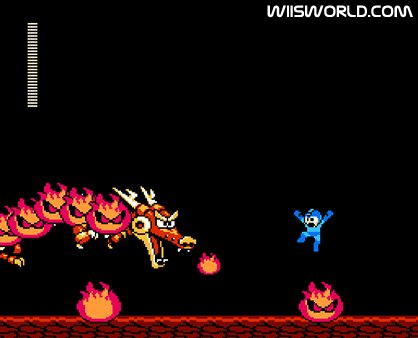 Let's call a spade a spade, the graphics totally suck by today's standards. But it's intentional, so is it really all that bad. Points awarded for character art faithful to the old designs.

I wanna score this lower, but the music is so well composed that it sounds great even in 8-bit.

That's a stupid rating for the graphics. I'd give them a 9, especially considering the optional sprite flickering is so well done.

You know, the graphics were done like that on purpose, because they wanted to make it look like the classics, so I'd give them a better score.

Nah I kind of agree on the graphics. Intentional as it is and faithful, still bad.