Published by Icon, Developed by Icon

Has very little to do with Association Football.

Soccer Bashi by Icon Games may initially confuse players into thinking that it's either a foosball type competitive game or other type of sports title. However, the 'soccer of the future' moniker that the game so proudly boasts is nothing more than a window dressing. The game in fact goes back to the old-school well, making essentially a clone of Atari's Breakout and Taito's Arkanoid, though with a few new wrinkles added.

Anyone who has gotten into video games has likely played a similar title. Players move a paddle on a vertical plane in order to bounce a ball. This ball in turn will break rectangular blocks and once all of the blocks are gone, the stage is finished. Each stage has the blocks arrayed in different colors and patterns and new wrinkles are added to nearly every stage. Things like unbreakable blocks, power-ups and enemies all change up the gameplay and help differentiate stages. It can be quite fun and addicting, but if players have gotten sick of this type of game, Soccer Bashi won't change their minds. 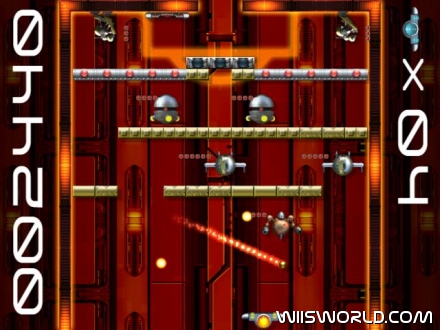 The sound in Soccer Bashi is mediocre to bad. The music is largely forgettable with one or two nice techno tracks which enhance the 'space' vibe. Unfortunately, to enhance the 'soccer stadium' atmosphere the developers are going for, you often hear vendors touting their wares. Hearing 'Ice Cold Lemonade!' for the 20th time gets very irritating, very fast.

There are several modes and options in Soccer Bashi. The first is just a normal, linear one player mode that features roughly 45 stages, including boss fights, which to this reviewer's knowledge are not a part of the recent Arkanoid Plus, also for Wiiware. There is also a two player competitive mode and an endurance style mode called tournament mode.

Finally, of special note is the fact that the game includes a level creator. The game's simple, yet addictive gameplay makes this a very nice feature, especially considering all of the player's stages can be played in tournament mode. Unfortunately, there does not seem to be any option allowing sharing stages online, making it only possible to play created stages with friends or family close by. 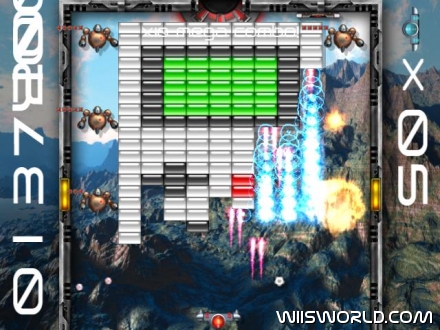 Soccer Bashi is available for 500 Wii points, and the similar Arkanoid Plus is available for only 100 more points. Which of the two you should buy depends on what you prefer. While Arkanoid Plus has many more modes and features, it lacks the level creator. Arkanoid Plus does feature DLC which costs an additional 200 points, but effectively doubles the game's length. Again, the main choice is between the more polished experience or the newcomer with a level creator.

Ultimately, Soccer Bashi is a clone. That isn't necessarily a bad thing, as the game still plays well and is very fun. With a level creator, it provides a worthy challenge to Arkanoid Plus, even if it might not be quite as polished.