Beyond the fact that the game involves killing innocent chicks, it can be difficult at first to understand just what chick chick BOOM is all about. In short, it is a strategy, puzzle and fighting game rolled into a fun, yet slightly limited package.

The main thrust of the game features two teams of adorably round chicks trying to kill each other off, divided by a wall. The action is turn based, with each team being given three attack options at the minimum, either a bomb, a crushing steel weight or a chomping Venus fly-trap. After choosing an attack, you enter into a timed mini-game. With each selection, the Wii's motion controls are used in a connect-the-dots activity to power the attack. Once finished, you can deploy the attack at any time but only have about thirty seconds to do so before the next turn occurs and the second team can act. It's ingenious, and could only be done on Wii or possibly DS. If you manage to complete the attack mini-game within a certain amount of time, you can choose to undergo another mini-game to add upgrades to your onslaught. In the second game you need to shoot the color within a moving target. Green colors give a 'half' upgrade, while the harder to hit red colors give a large upgrade. These additions are worth getting as bombs gain the ability to have more bombs or poison, steel weights become giant sumo crushers, and fly-traps gain tentacles and the ability to confuse. 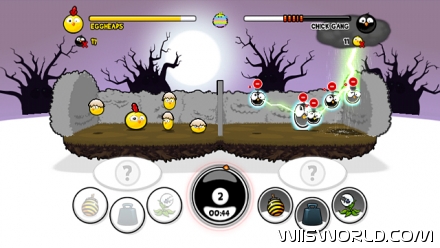 One would think this would slowly become boring, doing nothing but taking turns attacking. Luckily that's not the case, as being on the defending side also brings its own strategy into the mix. Events occur in real-time, so if the opposition lobs an attack into your area, you can draw a line with the Wii remote in hopes of defending yourself. Players only have a limited amount of ink which needs to recharge however, so timing is important and in a way is similar to the system found in the Mario and Luigi games on DS.

An added element of strategy occurs in selecting the venue to have a match, factoring in the periodic rainclouds, the pinata power-ups and the 'corn-cob man'. Each different venue offers its own special attack; the ship stage gives a giant squid for example. Every stage features a dark cloud to dish out lighting and depending on the position can aid or ill the player. Both the pinata and corn-cob man can aid whatever player gains their spoils, one giving power-ups, the other healing your chicks.

With the ability to defend in real-time and race against the clock to gain the best possible power-up, the game is frantic, fast and above all, fun. With two or more players, it can be amazingly addictive, and is easily the sort of game you can lose hours into. Not only is there the duel mode in which players simply try to defeat the other player, but there is also a timed mode (defeat the other player in a certain amount of time) and the survival mode which tasks you with defeating as many enemy chicks as possible and staying alive as long as you can. 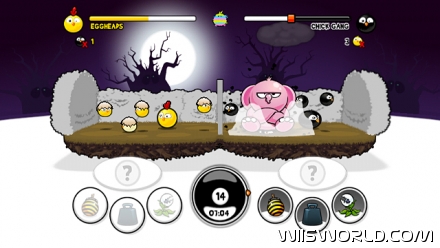 Unfortunately, the game's biggest flaw doesn't seem to be the fault of the developers. As Team Meat can attest to, the maximum size of WiiWare titles is criminally small, which might be why chick chick BOOM has a surprisingly little amount of variety. There's no story mode like in similar puzzle-like titles, and there are only three stages to fight on. The player can also only choose to be a yellow or black chick group, with the only cosmetic differences available being unlockable hats. With more special attacks, power-ups and modes, this could have been much more than it is. Hopefully, tons of bits see the game's potential and may port more versions of the game to perhaps DS or Playstation Move.

chick chick BOOM has very fun gameplay, that's a fact. However, even with a friend the game has amazingly little variety. It comes highly recommended, just be warned before you plop down 800 Wii points.