The ultimate darts game is now on Nintendo 3DS.

Darts Up 3D is a fun game of darts in which you will have complete control over aiming thanks to the Nintendo 3DS motion sensor. You can play with your friends and family, up to a maximum of 4 Players, using the Mii to create your profile.

Darts Up 3D has several playing modes, including the famous 501.

Darts Up 3D has no review on Wii's World. Write a review 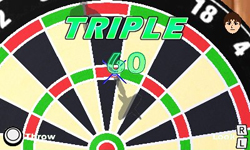 Darts Up 3D announced
Julio from EnjoyUp Games has sent us a press release announcing Darts Up 3D - a sports title coming to the 3DS eShop. You can see the...