In Dress To Play: Cute Witches! Dress to play and play to dress!

Make a little witch and design her outfit in the dressing room. When you finish, get ready to set off on an adventure as your character flies away on her broomstick to a peaceful world inhabited by fantasy characters.

The more you play, the more rewards and gifts you'll receive. You'll also earn more items of clothing to dress your little witches in!

Dress to Play: Cute Witches has no review on Wii's World. Write a review 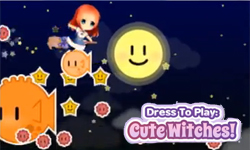 can i play dress up cute witches please