Despite being released over two years ago, the Nintendo 3DS still lacks a decent collection of truly compelling games that fully utilize the platform, this has led a lot of people onto the 3DS eShop in search of downloadable games to satiate their gaming needs. Unfortunately...read full review 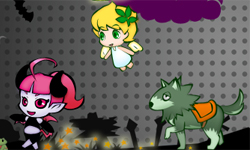 Groove Heaven on eShop this week
In collaboration with Japanese developers FUN UNIT, publishers Teyon from Poland have announced a new game hitting the 3DS eShop this...