Monster Shooter lets the player control Dum Dum, a heroic space goon who does not like aliens - and he has good reason for that. Aliens kidnapped his cat.

Dum Dum has a simple plan to save his cute little kitty: He will shoot everything that moves. The shooting mayhem never ends as Dum Dum uses every weapon he can get his hands on, from shotguns to rail-guns to rocket launchers, to blast tentacled fiends into atomic dust.

Monster Shooter has no review on Wii's World. Write a review 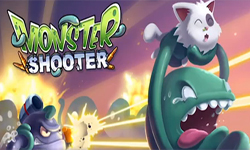