Published by Teyon, Developed by Starfish

Dance with bullets and shoot down the enemy in Steel Empire now on Nintendo 3DS!

Steel Empire is a steam punk shoot'em up game featuring a frantic combat filled with powerful enemies and insane obstacles. Enjoy a beautiful world and retro game-play as you dodge and shoot your way through classical stages. Choose one of 4 difficulty settings according to your set of skills and fight the evil empire! See how well you did using the Replay Mode and show your worth by getting all achievements.

Steel Empire is an old side-scrolling, steampunk shoot 'em up that was released for the Sega Mega Drive/Genesis way back in the distant, archaic year of 1992. It was a great game back then, it was a great game when it got ported to the Game Boy Advance, but is it still a great...read full review 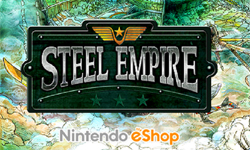 Steel Empire price cut
Publishers Teyon are offering you the chance to get thrifty this Valentine's Day, dropping the price of their 3DS eShop game Steel Empire... 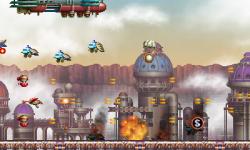 Steel Empire on 3DS eShop next week
Publishers Teyon are set to bring Steel Empire out next week, on July 31st. Originally released on the Sega Genesis and Game Boy Advance,...