Published by Teyon, Developed by Starfish

Steel Empire is an old side-scrolling, steampunk shoot 'em up that was released for the Sega Mega Drive/Genesis way back in the distant, archaic year of 1992. It was a great game back then, it was a great game when it got ported to the Game Boy Advance, but is it still a great game now that it's been brought to the 3DS?

The plot of Steel Empire involves a conflict between two opposing nations - the Republic of Silverhead and the Motorhead Empire. The story is told through an intro cut-scene and various mission briefings that are seen before the player begins the mission. It's hardly anything special, but Steel Empire wasn't meant to be played for some gripping tale of epic proportions. 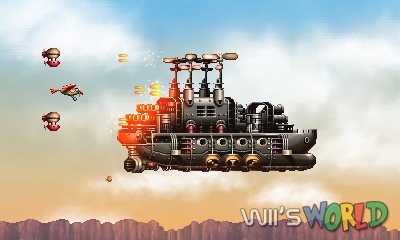 Gameplay is relatively simple. You fly to the right, shoot some bad guys, and avoid taking damage. Interestingly enough, you have two ships to choose from for each mission. One ship is a small plane shaped like a bird, and the other is a more hefty airship that packs more firepower than the small plane. However, what it has in power, it lacks in speed and maneuverability. It's nice two have different ships that don't handle exactly the same, and it helps add a small bit of replay value to the overall game.

Another interesting little mechanic is that instead of getting killed in one-hit like in a lot of shoot 'em ups, you actually get a health bar to go along with the ship of your choosing. You can replenish your health with the various heart-shaped upgrades scattered across each level. Speaking of upgrades, you can also obtain "P" spheres that upgrade your ship if you obtain three of them. In addition, there are also "B" spheres that give you more screen-clearing bombs, and "O" spheres that give you two helpful little machines called "Orbiters", which fire at enemies along with you.

Thankfully, the controls for Steel Empire are spot on. The ship goes where you want it to go, and firing is very responsive. The coolest thing about the firing, though, is that you can shoot both left and right, regardless of what direction the front of your ship is facing. This is especially helpful since enemies will often spawn behind you and go in for a rear attack. 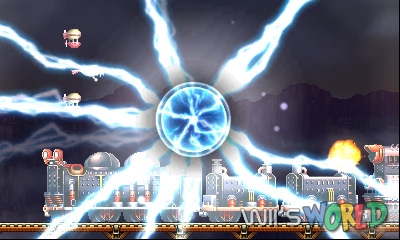 Each level in the game ends with a boss fight, and these are really fun to experience. You'll have to maneuver all across the screen looking for weak spots to shoot at, while at the same time avoiding too close of an encounter with these behemoths. It's hectic, crazy, and oh-so entertaining.

Since you are able to set the difficulty of the game, Steel Empire shouldn't be too hard or too easy for most players. When you're playing on easy, the game is more forgiving and soft. When you're playing on hard, the game is challenging and tough. If you're one who likes to experiment with different difficulty settings, Steel Empire has you covered.

The presentation is wonderful, with completely redone sprites that make Steel Empire look better than ever. There's also variety in the game's aesthetics, with backgrounds being obviously different from one another and different-looking enemies to face. The music is nice and fitting too, so you won't hear many complaints there.

Steel Empire is a wonderful shoot 'em up title even by today's standards. It might not have much replay value for those who don't care much for scores or creating replays of level playthroughs, and the price is pretty steep, but it's undoubtedly a well-crafted game that any fan of this genre should give a shot.