The concept of a game consisting primarily of a cute little kitty cat skateboarding across various different levels sounds like an interesting idea. If given the right amount of effort, one could make a game with this concept really burst with quality and entertainment value. Unfortunately, this is not the case with Skater Cat.

You play as Ollie, a cat who loves to skateboard, across three different worlds, each one containing ten levels. While skating, you can grab other stray cats that will follow you as well as make you go faster. More cats following you means more speed gained. However, they will only help if you have treats with you, which are widely scattered across each level. Not only that, but if Ollie takes a hit from obstacles such as spiked dog balls or spikes, you will automatically lose a cat. 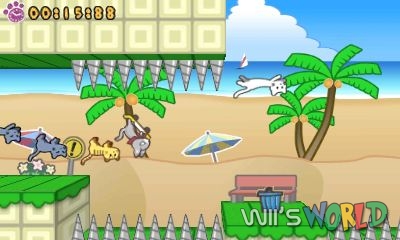 Right off the bat, I started noticing some big issues with Skater Cat (rhyme sort of intended). Firstly, the camera feels too zoomed in, meaning you can't see very far ahead of you at all. This will often lead to situations that require nothing but pure reflex, which makes some of the deaths feel a little on the cheap side of things. The only way you can make sure you don't fall victim to this is if you go as slow as you can and make frequent stops every time you feel you're about to enter an area filled with pitfalls and dangerous obstacles, although this feels like it's missing the point of the entire game in the first place.

When it comes to actual level design, Skater Cat fails to impress. You will consistently encounter the same kinds of obstacles throughout the entire game, with little to no variation at all. Pitfalls, spikes, and spiked dog balls make for the vast majority of each levels' danger zones. The only time where it feels like the game decides to spice things up a bit is when it throws in anti-gravity switches, which cause Ollie to skate across the ceiling. The sad part is that these switches don't feel like they were utilized to their full potential, as sections involving them are more often than not short and unremarkable.

What's probably one of the most annoying things about this game is that each and every level all share the exact same song. At first, you probably won't mind the tune, but after hearing it for the entirety of the game, you'll never want to hear it again. Were the developers and the soundtrack composer/s just too lazy to create more than one song for when actually playing the game? Because it sure seems that way. 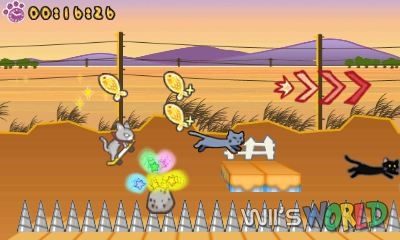 Graphically, the game does manage to pull off the cutesy look rather well. The cats are cute, the colors are vibrant, and even during nighttime levels the game still feels full of sunshine. They're nothing mind-blowing or revolutionary, but they're definitely passable at the least.

At the end of the day, Skater Cat just isn't worth your money. The game is incredibly easy, and there's little in the way of content. The only things you can unlock (aside from the main levels/worlds) are the ability to play as your Mii and a few hats for your Mii. No bonus worlds, no different modes, nothing that actually feels like it adds real replay value. The game can easily be completed in less than a day, and the only reason I can see anyone coming back for Skater Cat is to beat other players' high scores or your own, unless you really love hats and can't stand the thought of not owning them all. Overall, Skater Cat is just a plain disappointing game.