Skater Cat is a side-scrolling action game where players jump on board a skateboard with Ollie the coolest cat in town. Players will travel through 3 worlds in over 25 levels collecting treats and rounding up stray cats to win a total of 90 medals! Best times and ghost runs can be exchanged with other players and the games' developers via SpotPass and StreetPass, once enabled on the Nintendo 3DS system.

The concept of a game consisting primarily of a cute little kitty cat skateboarding across various different levels sounds like an interesting idea. If given the right amount of effort, one could make a game with this concept really burst with quality and entertainment value....read full review 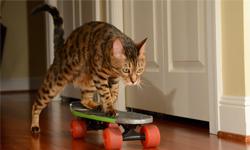 Skater Cat on 3DS next week
If, like most people, you enjoy cats and skateboards, Teyon are releasing a 3DS game that should be right up your street. Skater Cat...