This budget kitty has quite a bite

Smash Cat Heroes is an overhead-view fighting game with an interesting spin - most of the characters in the game are cats or kittens, including the enemies. It's overtly cute, it's short and sweet, and most of all, it's fun.

You can play as three different characters, each with unique stats and fighting techniques. Yoshitsune, my personal favorite, has an average reach and width to his attack. Kiyomori seems to be a bit slower than the others but has a long attack range. Yoritomo is more of a power-house. His attack arc is wide but has a poor frontal range. Regardless of which character you choose, be prepared to fight through hordes of enemies ala Samurai Warriors and face off against big bosses at the end of each level. 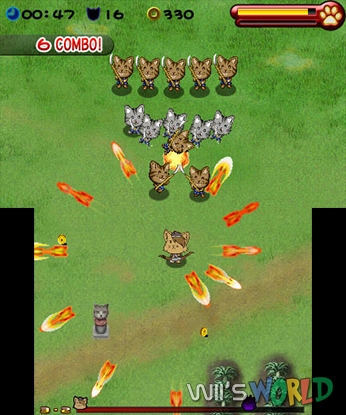 The gameplay in this little $3.99 title is excellent. The combat is easy to get into yet it offers plenty of ways to strategize. The main four buttons will activate a standard attack, a rolling dodge, hyper mode, or a screen-clearing super attack. The standard attack will build up the paw-meter, while dodging, engaging in hyper mode, or executing a super attack will drain it. The meter fills up by attacking enemies, and if you can clear enough space from enemies, one can charge the meter faster by holding the shoulder buttons. In addition, there are three levels to the regular attack: press 'Y' for quick combos, hold for one second and release for a power-attack, or hold for three seconds for a large attack.

It may sound complicated, but after a just an hour of playing, I was not only advancing through the stages quickly, but I was going back to older stages to unlock the challenges, in turn making my characters more powerful. There are three challenges for each stage, and you can repeat any stage that you've beaten as many times as you want. Unlocking challenges will award large amounts of coins for upgrading your characters and sometimes even special items that you can equip on your cat to gain advantages in battle. This adds an extra RPG-like layer to the game in the way that you can choose which stats to upgrade first: For instance, should you upgrade speed, power, hp, defense, perhaps an extra equip-slot? The choice is up to you. Still, the challenges aren't easy. Some of them require beating 200 enemies without being hit, defeating a horde of enemies in 2 minutes, and fighting without useful, protective items.

The graphics aren't anything to write home about. They're decent and if you like felines then you may love the visual style. It's got that Asian, feudal-Japan look and it works quite well. The music is fitting, a mix of techno, rock, and old-world Japanese music. 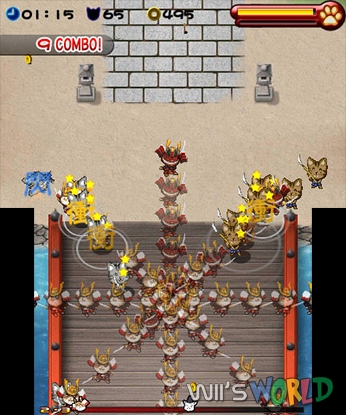 I think this game is one of the best budget titles on the 3DS and a darn good game on its own, regardless of the platform or cost. It's fun, and it's easy to pick up for a few minutes then quit and pick right up again. It's a casual title on the surface that takes some old-school skill to master. The controls are tight, the battle system is fun as you can bounce enemies around like rag-dolls and ricochet them off of each other. The characters are adequately varied as one progresses through the levels, and the challenges add quite a bit of replay value.

To wrap this review up, I hope this game continues to sell and build a fan-base, as Tom Create obviously has potential to do even better. I wouldn't mind a sequel that has exploration elements and dungeons (like Zelda and other overhead titles) to add further depth to an already solid and entertaining foundation. Give this little game a try. It's worth it, and I think and hope that this is the start of a worthy series.