Paint job looks nice, but does the engine work?

The Mario Kart series has been a staple of Nintendo consoles since the SNES days. While the series has consistently added tweaks, characters and new tracks, the overall gameplay formula has been the same. In some ways Mario Kart 7 shows that Nintendo is finally embracing certain modern conventions, but it unfortunately clings to many other more outdated ideas.

Anyone familiar with Mario Kart should be able to instantly pick up and play MK7. The Grand Prix Mode has three engine classes (i.e. difficulty levels) with eight cups, each with four tracks. Sixteen of the tracks are brand new and the others are all modified versions of old MK tracks. As usual there are also time trials against player and developer ghost times, a balloon popping battle mode and a new coin rush mode in which players scramble to collect as many as possible before other players. Speaking of which, coins return to the Mario Kart Grand Prix for the first time since the original, and give additional speed for each coin collected. In addition, each kart has been given a glider and propeller attachment for brief forays into the air and under the water. 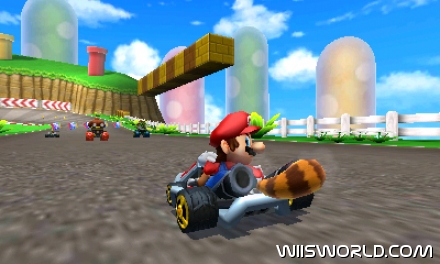 Unfortunately, these are only minor additions at best, and don't fix the issues which various players have complained about since Mario Kart 64. The 'rubber banding' system which is supposedly meant to help less skilled players catch up still punishes those who are able to remain in first place with bad power-ups and the dreaded blue shell. Players will likely find themselves battered by blue shells sometimes up to four or five times in one track alone, even in the single player mode. To exacerbate the situation, those who more quickly pick up coins are given an unfair advantage with better speed than those who don't have coins; though the coins do eventually come back, it still gives an unfair advantage. This is compounded by the glitches that give advantages on certain tracks during online play and makes one wonder exactly how much effort was put into the overall game design.

Thankfully, the track looks and designs fare much better. There are a number of great looking and playing tracks, from the nostalgia fueled Pirhana Plant slide, to the Cyberpunk inspired Neo Bowser City, to what is probably the best version of Rainbow Road in the series' history. There are three tracks which interestingly are all continuous rather than being lap based, and at the least show what could be a great new element to the series.

As mentioned earlier, Mario Kart 7 looks great. In fact, the game looks even better than Mario Kart Wii, has more colorful art and is aided by a constant 60 FPS, with the 3D effect just icing on the cake. Especially nice is the fact that the game's tracks are more unique than previous installments, though there are some uninspired designs. 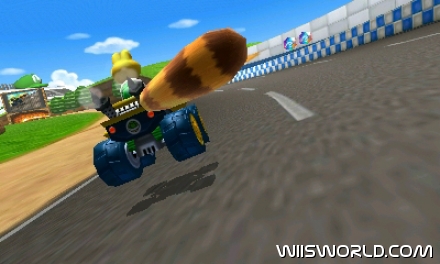 The music unfortunately does not fare as well. There are some nice jazzy tracks at the beginning and credits sequences, most of the game's music is decent, but not up to the level of the more classic Mario Kart titles. The voices are standard Mario fare, with the one exception being Donkey Kong's cringe inducing voice.

Though the game does include the standard Mario Kart Mirror Mode, it takes more than a few steps back in that it does not include the Mission Mode that originated in Mario Kart DS and many of its better characters like ROB in favor of bit characters like Wiggler and Metal Mario. However, if players are willing to go online, there's quite a bit of value to be gained. Unlike many of Nintendo's other efforts, the online play in MK7 is incredibly smooth with little to no lag whatsoever. As if this weren't enough, Nintendo has given players the option to form communities which allow rule variations. Though this does allow players to play matches without certain item sets (like shells), but these options are nowhere near as specific as something like multiplayer on one of the HD systems. While there are still issues, including exploitable glitches, these are still steps in the right direction.

Mario Kart series Producer Hideki Konno has admitted that Mario Kart 7 was rushed in order to make the 3DS' first Christmas season, and it shows, but MK7 is still a fun game. That being said, every innovation just shows how great the series could be if it were given more time and attention. The online mode alone shows that Nintendo is willing to bring their franchises up to modern standards, so let's hope that the next Mario Kart does more than just take steps to bring the series up to speed.