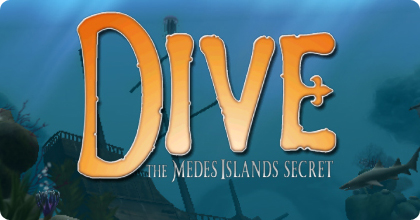 A few days ago we saw the trailer for Dive: The Medes Islands Secret, a WiiWare game in the making. Cosmonaut Games, the developers were kind enough to answer a few questions on it.

WW: Hello, could you introduce yourself and describe your role at Cosmonaut Games?

My name's Jose A. Giacomelli but everybody calls me Giaco. I am 40 years :( and I had my first video game at 8, and then when I was 15, I got a Spectrum 48K. From that moment on I've got a Commodore 64, an Amiga, an MSX and a lot of PCs. I am very lucky as I've been managing different video game projects since 2001, and besides I have cooperated in PC projects, for Arcade machines, Slot machines, etc.

We created the commercial mark Cosmonaut Games at 2009, when we developed our first game: 5 Spots Party and nowadays, I am working as producer and game designer in Cosmonaut Games, settled in Barcelona (Spain).

WW: The trailer for Dive: The Medes Islands Secret looked great. Can you tell us more about the game?

The game looks great too! We have worked very hard to create these videos because we really tried to do our best to transmit the video game's grip and create high expectation. We thought it up last Summer and felt that a 2D platform genre would be a great idea.

5 Spots Party helped us to understand how the market works and how Nintendo is. We wanted our next title to be more advanced and to obtain good graphical results and an entertaining game.

We created a very elaborate script for a platform and we set internally different objectives: fun, graphics quality and gameplay duration.

We think that we'll really satisfy the players' prospects. The game lasts about 5 non-linear hours and if the players insists on obtaining all the achievements it can even last 7 hours. We have created a script game with a double objective which will extend the gameplay duration. Scenarios are quite big and full of enemies, caves, treasures and surprises. The players will enjoy it a lot!!

WW: In terms of controls, is the Nunchuk used or is everything done on the Wii Remote?

We have had a lot of internal discussion about the controls and at the end we decided to use only the Wiimote. With the pointer we can direct John Sanders and aim and shoot the enemies. When pressing and holding the B button the character swims. Pressing B twice you can give him an extra impulse. Button A shoots tranquilizer darts and the Control Pad let us see the map and activate the torch.

WW: With enemies like sharks and jellyfish, does combat feature in the game a lot? Or do you mainly try to avoid them?

The objective of the game is to find treasures but it's really difficult due to enemies. There are a great variety of aggressive enemies or mere obstacles but most of them just chase you, they are hidden behind the rocks and you lose a lot of oxygen because of them. Your speargun has very few darts so you have to ration them and reload your speargun looking for charges under the sea to pass the different levels.

WW: Since the game is based on a real-life place (The Medes Islands), have you been on location to learn about it? :)

;) Yes! Of course! I went to Medes and to Creus Cape. But I couldn't see in detail the rest of the Isles L. We have used Google and Wikipedia to learn about the history of the different locations we have chosen. In the case of the Medes Islands, a few Catalan institutions helped us with pictures and very valuable information for the game. We have not been able to reproduce the bottom of the sea at every level but all the pictures they sent us were very useful to inspire us to create the final result.

WW: Your blog indicates the game is already finished; do you have a release date yet?

Not yet. We are just testing it. We are in the final stage and very close to the release, but I don't know the fixed date. I will notify you as soon I know it.

Thank you Rob, Travis and WiisWorld to give us the chance to explain more about this wonderful game. I hope you all enjoy it playing it as much as we enjoyed creating it.