When Steven Spielberg announced that he was partnering up with EA to develop a game exclusive to the Wii, everybody envisioned a big, epic blockbuster. But when it was finally unveiled, we were treated to a colorful puzzle game called Boom Blox. It was certainly not what people were expecting and took some criticism. But after the game was released, it was welcomed with open arms into the Wii library, garnering some great reviews. This motivated Spielberg and EA to make a sequel, and so Boom Blox: Bash Party was born.

Bash Party's gameplay will be familiar to anyone who has played the original. The objective is to topple over increasingly hard puzzles around a variety of different locales. Once completed, the game grades you on how many tries it took you to complete the puzzle with a simple bronze, silver and gold medal system. 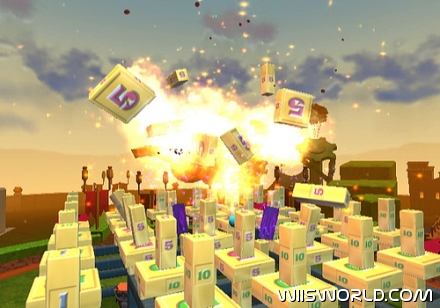 Controlling Bash Party is simple enough. You aim the Wiimote at the screen, while selecting different items. You can then chuck said item at the large mass of blocks by holding the A button and flicking the remote. This is translated into the game as if you are shooting a slingshot. There are also other actions you must perform, specific to the type of puzzle you're trying to complete. For example, a Jenga style level will have you remove certain pieces carefully while trying not to topple over the stack of blocks, while another puzzle will require you to spray the blocks a certain color and if you manage to get the same colors three in a row, then the blocks will disappear (like a Bejeweled style of gameplay). This gives player a lot of variety and keeps things from getting too repetitive and stale.

Boom Blox: Bash Party also features different block types which will either make the puzzles easier or harder to complete. Examples of these special blocks would be the virus block, which spreads out and destroys multiple blocks, the change block, which flips through a variety of different block types, and the boom bux block, which gives cash to burn on later levels. This element of gameplay bumps up the challenge of each puzzle and serves to keep the player engrossed.

When it comes it overall depth, Bash Party doesn't shy away. There are 400+ levels to complete, all of them being clever and fun to play. There is also a level creator, which featured in the first game, but is now packed with more items and features a tutorial system which makes the mode more accessible and less complex. You can also share your personal creations online through Wi-Fi connection. 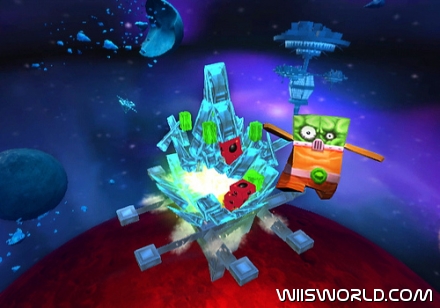 But the mode that EA are banking on people getting excited about is the multiplayer (hence the name Bash Party). It features cooperative play, where players must complete each puzzle as a team, competitive play, where you and an opponent must work against each other, and team based play, where players are divided into groups and must beat the opposing team. The omission of online play is slightly disappointing, but if you have a sibling or a group of friends who like a challenge then you'll manage to squeeze a good deal of enjoyment out of this mode.

Graphically, Bash Party has the same colorful style that the first one presented, but there is much more variety in the environments this time around and the blocky characters still make me chuckle. The sound in the game is also solid, with whimsical tunes that fit the atmosphere nicely.

Boom Blox: Bash Party is a great sequel to a great predecessor. Everything in the game works together seamlessly and the replayability is staggering. Although the lack of online play is a disappointment, sharing user created levels is a treat and the 400+ levels is sure to keep players busy for a long time to come.

I've never played the first boom blox but my guitar teacher has it and said he really liked it.

The Boom Blox formula is easy to grasp, because at the basic level, your goal is nearly always the same: destroy blocks. But how you do that will differ widely throughout the more than 400 levels.