Published by Oxygen, Developed by Twelve

The platformer was once the leading genre in gaming. Characters such as Super Mario, Sonic the Hedgehog and Crash Bandicoot were all mascots that commercialized this style of gameplay. But nowadays, platforming has taken a backseat on next-gen consoles. All consoles except the Wii. With solid games like Super Mario Galaxy, Klonoa and Wario Land: Shake It, it's clear that Nintendo's system won't let gaming's most beloved genre get left in the dust. Unfortunately though, some games seem to have been designed to destroy every fond memory a person has of the first time they jumped on a goomba. One game that makes that category would be CID the Dummy.

The premise for CID is simple enough. Set in a world where everything is to be tested to ensure public safety, you take the role of CID, a test dummy who has become uninterested with the repetitive tasks he is being given and wishes for more excitement in his existence. His wish eventually comes true when CID's creator's daughter disappears, and the dummy is tasked with finding her. 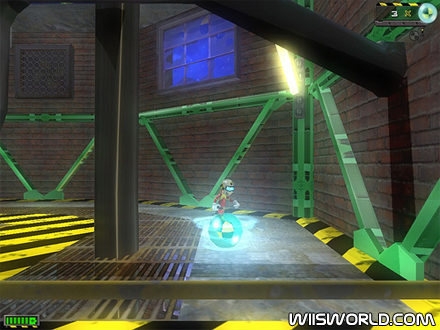 Gameplay in CID is standard platform fare, which includes jumping obstacles, light puzzle solving and defeating a number of enemies and big bosses. But there are also some more unique elements such as the ability to fire weapons and complete vehicle sections.

Now you would think that all these classic platforming components would create something that is at least playable. Unfortunately, this is a mess in almost every category. First off, CID moves like a slug, making every level seem like chore to complete. Secondly, the so-called obstacles in the game aren't challenging in the slightest. Thirdly, boss battles are uneven and frustrating. Fourthly, the vehicle sections are broken. Fifthly, the motion controls are tiring to execute consistently. The list of complaints goes on and on, and to type them all on this one review would be as boring as completing the tutorial level.

The graphics and sound in CID are nothing to rave about either. The environments have blurry textures and look jagged, as if they took a PSP game and just blew it up to fit a television screen. The music is instantly forgettable and the voice overs are grating. Technically, CID's graphics and sound compliment the gameplay nicely.

The developers, Oxygen, really need to start playing the classic platformers if they want to get the formula right next time. In any case, stay away from CID the Dummy at all costs. Nothing works here.