Published by THQ, Developed by Rainbow

Bad to the exoskeleton.

In this context, bad means exciting action, dark themes and responsive controls. Deadly Creatures, by Rainbow and THQ, places the player into the very real, but no less frightening, world of insects. Its slogan, "Hunt or be Hunted", truly defines the spirit of this title. A fighting game, an adventure game, and an action game all mixed together, DC is in a darker spectrum of gaming. Not often do we see true hardcore games on Wii, and even when we do, it isn't often Wii-exclusive. However, DC is both.

Set in a desert setting, the characters are speechless, nameless, and might as well be faceless. The story is interesting, a blend of murder and drama, but it isn't always directly connected to the gameplay, or even the characters themselves. The two humans are voiced by well known actors, Billy Bob Thornton and Dennis Hopper. They are involved in a generic plot that isn't always clear. However, the story adds a unique element to this game, even if it takes second priority to the action itself. I can easily see the developers deciding that insects going about their normal lives is not interesting enough to sell well with audiences, so they added an unexpected plot that adds more than it takes away. 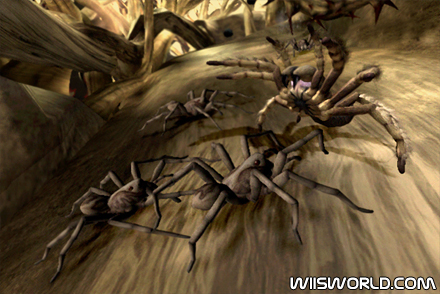 The core of DC is action. Both characters, the tarantula and the scorpion, have distinct fighting styles. The tarantula is a swift, defenseless killer. It can jump, but it can't block attacks. The scorpion is a tank. It's slow and heavy, creating an altogether different, perhaps preferable to some, fighting style. The action generally consists of you running through linear areas and attacking any insect that makes the dire mistake of challenging you.

Every now and then an enemy will be considerable enough to have a cut scene. Usually this means that a new move awaits you behind the enemies' attacks. Once the insect has fallen, the current character will either eat the head or devour the creature entirely, inheriting the special move that the insect had. Adding new moves to the game certainly livens things up, however this is where adventure elements come into play. Depending on your preferences, you may not like a game that forces you to learn new abilities simply to get through a part of a level. These moves are either too hard to use during actual combat, or they don't do enough damage. 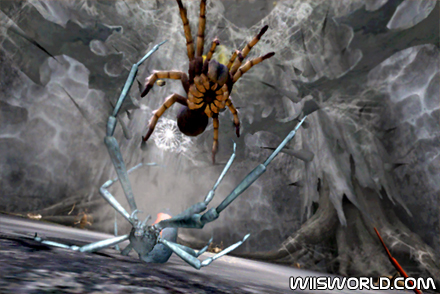 As the scorpion in combat, and occasionally as the tarantula in scripted segments, you will need to respond to quick time events. In combat, these are awesome. Cinematic, dramatic and violent, the quick time events act as finisher moves. They consist of Wiimote gestures (not waggle, mind you) and button presses. The scripted events however, just aren't necessary. They act as game lengtheners, seeing as missing one results in a restart from the last saved point. Overall, the scripted events are annoying and frustrating.

In general, the gameplay weaves together to create a smooth, exciting package that only occasionally runs over some rough spots. 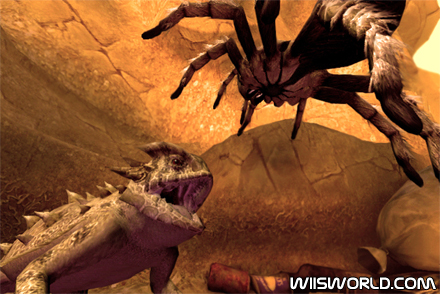 As far as lifespan is concerned, DC doesn't fully make the mark. The game is long enough, but not epically long. Somewhere less than or around ten hours is expected, but that depends on how much you want to collect. There are small worms, called grubs, that you can find and eat which will unlock interviews and galleries. While it is commendable that the developers added so many grubs to find (450), galleries simply aren't enough incentive to collect every single one. Perhaps a new character or secret level would have made the game worth going through to completion.

My own setup is a 36" screen with a HD component cable. This means that the screen is small enough for 480p to actually look like decent high definition. On a bigger screen however, the graphics may not have the shimmer it did for me. DC runs in widescreen and the models are well made. 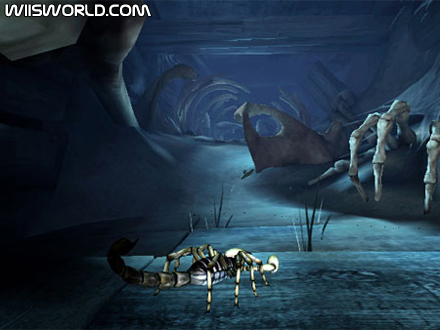 The only complaint would be in the environments. While certainly in favor of the dark themes of the game, the environments lack detailed textures and have rough edges. Every now and then, the playing character will run into a corner or wall and start to jitter. This is among the very few technical issues I found in the game. In general, the graphics are beautiful and dark for a Wii game and may even turn a few heads.

While perhaps the least important aspect for a game like DC, the music and voice work give the game some true emotion. Billy Bob Thornton's monotone, eerie voice was an excellent choice for his character. Likewise, the music played is creepy and adds to the desperate mood of the game. The music will raise tension when near enemies or a disturbing object (such as the decayed human remains often buried in the caverns underground). The sound, while not heart stopping, conveys emotional qualities essential in a game with such emotionless characters. 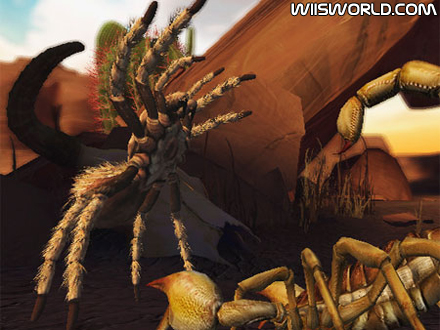 Through and through, everyone should experience Deadly Creatures at least once. For those who find insects slimy and disgusting, the game may actually give a new respect for the creatures. With its dark and malevolent themes and strong gameplay mechanics, this game is a win for Wii owners. While not perfect, Deadly Creatures certainly gives new life to the hardcore crowd who will want to sink their teeth into the fun yet equally disturbing action.

That was a fantastic review, it really let me know what I'm in for when I buy the game, thanks Nova.