Fire Emblem. For lovers of strategy games and Nintendo, this name brings joy to the ears with good reason. There aren't many games in it's genre that can come close.

In general, it plays as a tactical RPG in which you move your characters from place to place, depending on a fixed movement rate, based on class. Each class has it's own forte against other classes, and requires the utmost of thinking before you go into gameplay. 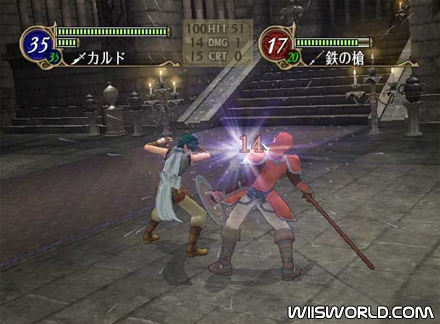 One of the things I liked the most about this game, is also one of the things I dislike about it. It's challenging, and forces you to think a lot about what you're doing. The levels are difficult, but not impossible. This gives you an amazing feeling of accomplishment after beating a map, but frustration during. To put it simply, if you don't think you're very good at Fire Emblem, or wish to play casually, do not begin on normal mode.

The normal difficulty setting is amazingly hard. One misstep, one misplaced unit will easily get killed and will be wiped off the face of your unit roster. They have countered this by implementing a 'Battle Save' feature, which is completely unlike Suspended Data, for those who are familiar with handheld Fire Emblems.

Suspended Data lets you pause gameplay, go to the main menu, shut off your game. But, you can't load any other files, lest you lose your suspended data. 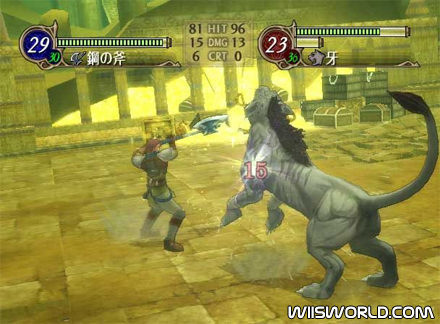 Battle Save allows you to actually save in the middle of battle, at any point. Essentially a quick save, in case you feel that you'll mess up.

Thanks to the difficulty, I've found that in order to not lose any units, you have to battle save every round that nothing goes wrong, which gets aggravating. But, if you don't mind losing a unit or two because you overlooked one foe who could kill you, then the difficulty won't bother you. Just make sure it's not your Commanding Unit that gets annihilated though; that causes an insta-loss and if you didn't save before hand, you'll have to start the chapter over.

Although in parts easy to see through, Radiant Dawn manages to keep you immersed in the storyline with cryptic clues to future plot twists and beautiful cinematics, done in a cel-shaded manner (but cel-shaded in a sexy way). 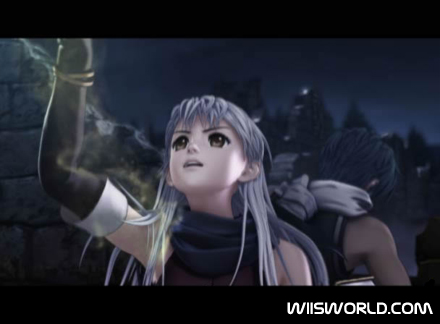 There's a great amount of characters featured in the game, all of the old ones from Path of Radiance carry over, with the exception of Largo due to a mysterious injury. Most characters are attained mid-battle by achieving some secondary goal, like getting a certain character to another, to convert them to your side. This adds even more challenge to the devoted player who wants all of the characters, and to not lose a single one.

Not only that, but they added a third class allowing you to promote your class twice, into an uber unit essentially. Laguz (humans who take the shape of humans) don't promote at all, but have higher stat caps in general, and a 40 level total.

As I had mentioned before, the cinematics are awesome, although unfortunately they're used sparingly. They're all very detailed and decent voice acting is made use of. The ridiculously dramatic dialog will make you laugh from time to time. It's not a serious problem, but in parts you will roll your eyes. 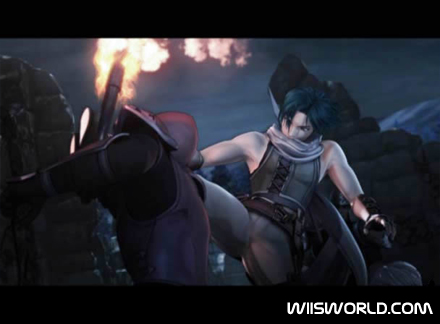 The inherent flaw at Fire Emblem's core is the random number generation. As you level up, your characters randomly get points assigned to a general assortment of stats that befits their class (Warrior: HP and attack, Mage: Magic and resistance etc). But often they barely get any bonuses, or sometimes none at all.

Strangely, what will happen is that you'll miss, and they'll hit you and kill your unit. There have been times in which I had 98% to hit, and they had 17%. I missed, they hit and killed my unit. 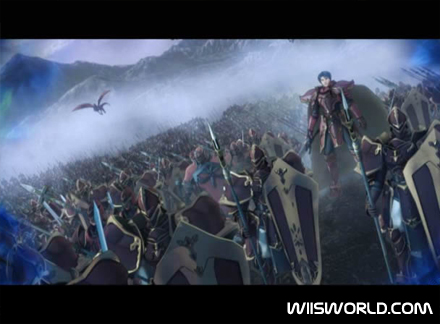 I call this strange phenomenon "Fire Emblem Logic". It's evident in all of the franchise's games. It's the first rule of the game engine; if it shouldn't happen, and if the player's unit will die from getting hit, it'll happen, and the unit will die. If you have patience, or don't mind losing a unit here or there, then this won't bother you. But for those who get annoyed at having to save every round or don't want to lose any units, this will drive you nuts. But then again, the system is what makes it Fire Emblem, and I would never change that to be honest.

Although I wasn't expecting a big increase in graphics, I wasn't expecting them to be an exact copy of Path of Radiance. Nothing is polished. They just added another tier of class promotions, and different attack styles so you don't see the same boring slash every attack for a certain class. Somewhat disappointing, but when I got the Wii, I understood that I was exchanging high-brow graphics for fun games and innovative play.

In all, the flaws are minute. For fans of the franchise, or those with a taste for medieval tactics, this is for you. Definitely a good game, and a strong title for the Wii. 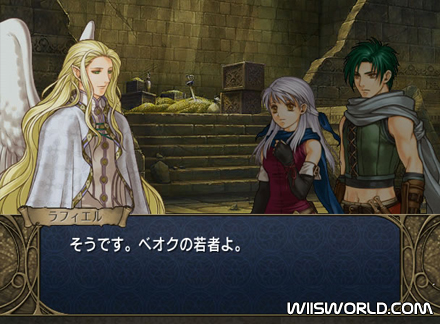 Hmm, the hardest Fire Emblem to date huh? Now I really have to finish up Path of Radiance.

Mmm, the graphics aren't too bad in my opinion. The difficulty gives me masochistic pleasure. Heh. Oh, and I definitely think they need more of those awesome anime cut scenes. Those are definitely Wii quality graphics.

If I ever get this game, I won't use the Save Feature. That defeats some of the purpose of Fire Emblem if you ask me. I'm a bit skeptical of how hard this game is, just because I've played the Gameboy ones and I know what it means to be patient and think about what you are doing. This review didn't help me out much (I figured the game would get a great score at a Wii website), because I got the Gamecube version, and I thought it was great except for the fact that it lacked the awesome fight animations that the Gameboy versions had. No mention of that in this review, though from what I've seen they are the same as the Gamecube version. Ah but it is such a fun game.

One of the best games I have ever played. The sheer number of available characters made me very happy.

Man I can't wait for this to release in Australia then if it's that challenging. I'll love it for sure and I loved path of radiance a lot, I still play it now from time to time.

I'm happy to hear this. Even if I never played Fire Emblem before, I LOVE this game already.

Epsilon you're not the only one who has to beat path of radiance. I've beaten every GBA fire emblem that's come to America.

Fire Emblem is the best. Yes, it's very hard to newcomers but as you go along through the game it gets easier. I have this game and the story is great with the BEAUTIFUL cutscenes. Yeah, you get to see Ike and all but for those who don't know him, he is in his older version in this one so he might look a little bigger than in SSBB. I tell you guys, that this game is one of the best.

Ah, you beat me to writing this one, very well done review. My only complaint is that the graphics have in fact been facelifted. I noticed right off the bat that they were better; not significantly, but still crisper. Oh well, very nice review.

Trust me Super King, if you play on normal mode, you WILL use the battle save feature. This game is pretty intensely hard.

This is the single greatest fire emblem game out of all four of them, and I own all 4. So buy it and love it. The only down sides are the graphics and it's hard to pick out your units from a crowd.

This game was by far the hardest of any Fire Emblem to date. I started it on hard and it beat me so violently my head spun. I chalked this up to it being "Hard" mode, so I took it down to Normal, and it STILL beat the ugly out of me. Plus, I can't rely on full Pally teams like I used to.

Hey does anyone know when this releases in australia?

Hold up Soren, how did you start out on hard mode? On mine I had to beat Normal Mode first.

@goldoan soldier, soren might have the the Japanese version where the difficulties are normal, hard, and then you can unlock maniac.

Forgot about that. Please accept my apologies.

I wish Nintendo would bring back the tactician role from the GBA Fire Emblem game (starring Lyn, Eliwood, and Hector). The first time playing that game and knowing you play a significant role with your companions just make you feel as part of the team yourself. None of the Fire Emblem games before or after that game had that kind of feeling. Character's emotional feelings, friendships, trust, character relationships, and useful hints all are told to you by the units themselves something unseen in strategy tactic game. Also seeing them die make you regret to start the mission all over again. Though Radiant Dawn is very different from the GBA game, it does share the same theme but no Fire Emblem comes close to the Elibe story.

Agreed Son Ninja, I liked that there was the tactician role, in fact it was one of the reasons the GBA Fire Emblem is my favorite Fire Emblem game so far.

I just beat the game on normal and did not lose a unit. Plus I never used the battle save so methinks you guys are exaggerating this game's difficulty a lot.

If you've ever played the Super Nintendo fire emblems you would know that those are much harder (though not more tactical).