Not a giant leap for Madden-kind, but much more than one small step.

It's that time of the year: Maddenoliday is upon us. It seems like a new American tradition is being forged into the month of August. Annually, fanboys are lining up at 12:00 midnight, decked out in authentic NFL jerseys, participating in the country's biggest video game craze. I was one of these fanboys myself, waiting for 30 minutes in my #80 Jeremy Shockey (Go Big Blue!) just so I could swing around my Wii remote like a football superstar that night. Bleary-eyed and sore-armed, I called out of work the next morning just so I could repeat my previous night's excursions all over again (after a short nap, but only a short one). 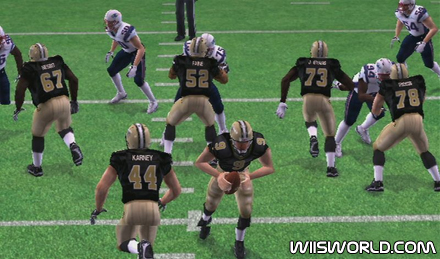 All of the new features work, creating a better overall game than Madden 07. But there are just some flaws from 07 that still peek out to bother your gridiron jubilation. All the motion controls feel tighter in-game. Stiff arms are more responsive, power moves consist of an absurdly simple shove of the remote, big hits are now done with only the remote, and kicking (thank goodness) is WAY more responsive than last time.

There's still an ultra-deep level of game management that all Madden vets will instantly recognize, like custom audibles and hot routes, coverage audibles, line shifts, blocker control, fake snaps, the list just goes on and on.

Helping you with game control are the all-new player weapon markers. Zoom out, and the field becomes littered with icons that indicate heavy hitters, cover corners, speed backs, etc. Obviously, it's quite easy to become fully involved in your gridiron battles. 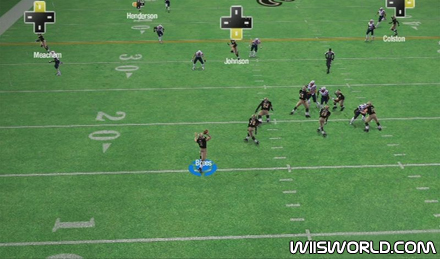 Don't want to be an all-involved gamer? Check out the all-new Family Play, which allows you to control the game with just the remote. You pull off remote movements like passing and defensive rip/swim moves, while the computer controls all the nunchuck movements. Be warned: Family Play is for newbies only, as experienced players may find themselves frustrated with the amount of control the computer has over their game. Still, for introducing a stranger to Madden (if you can actually find someone who hasn't played it yet), this mode is a great way to kick things off.

Single player modes are deeper and more intuitive than last year. Franchise mode puts you behind the owner's desk, allowing you to build up a dynasty the way you want. It's so immersing, you can even alter the prices of hot dogs being sold at the stadium. Superstar mode is much more personal, as you can create a superstar in your likeness and take them through a life in the NFL, from the rookie squad to the hall of fame. There's still the mini-camp drills, which consist of focused challenges, from kicking corner punts to tackling running backs. These games are fun, but unfortunately the sole incentive to really complete them is to say that you did, as the only thing you unlock are game situations based on the drills.

Multiplayer mode is where it's at in Madden 08. New this year is Party Mode, and if you bring over the right kind of people (competitive people), you're going to really enjoy yourself here. There's a play now option with a new Party Mode twist; the Telestrator. This bad-boy gives you the opportunity to graphically enhance your smack-talking. With the Telestrator, after pulling off a big play you have a limited amount of replay time with the infamous Madden highlighter pen. Just like the big guy himself, you can draw X's, O's, or whatever other potentially embarrassing doodles you can think of on screen with the remote. 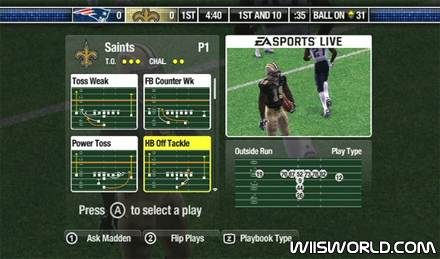 The mini-game mode is super deep, with 22 different games available. Most of them work, and the more friends you have involved, the more fun they become. There's even a trivia mode, which is fun for anybody who likes football, even if they can't get their heads around the actual game itself.

Online play has finally made its way to Wii, and it comes with both positives and negatives. You use a profile in EA Nation to log on, which is easier and makes more sense than the ridiculous friend codes found in Pokemon Battle Revolution or Mario Strikers Charged. You can play quick matches, ranked matches, add friends to your buddy list, and even chat in lobbies, though this is somewhat limited because you must use pre-set messages.

In-game is where online play stumbles. I haven't had a game yet without lag (unlike Mario Strikers Charged, which is relatively lag free). The lag is pretty rough too, as you will notice a significant delay from controller motion to on-screen response. I have a DSL connection, so one would assume cable, T1 or FiOS might have a better time with it. However, the lag is more controller lag than on-screen lag, so I think that this is a problem with the game itself. 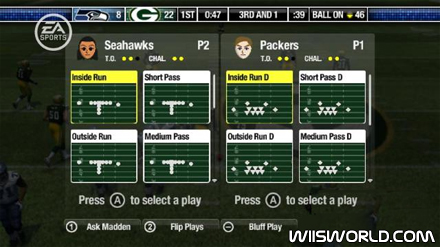 What holds Madden back from being the best it can be are the little things. I've already mentioned the lag problems online, but I really can't finish this review without mentioning my disappointment in the graphics. The visuals are barely a step up from last-gen consoles. There is noticeable blur effect when the camera pans out and around, and sometimes weird things happen like blur staying through an entire play, or players' faces completely disappearing. I know the Wii is capable of more, I've seen it in other games, and I really wish EA would fix the graphical glitches. Other problems are those now commonly associated with Madden games, like sketchy AI or a game preference for offense. I must also mention that the music selection doesn't hold a candle to last year's game, which was fantastic.

All in all, Madden is a fantastic game with several small problems that hold it back from being legendary. However, there's no way you are not going to have long-term fun with it. This is one of those packages where you will get your $50's worth. With all the single player modes to experience, and the vast amount of multiplayer goodies thrown in, you're going to be playing this game right up until next August, when you're lining up at the store at midnight again, decked out in your nice, clean, stitched jersey. Happy Maddenoliday everyone, because with the Nintendo Wii, more people can celebrate than ever before.

Graphics are a little better than '07. They still look kind of the same though.

I don't think we should trust a review from a fanboy. I got the game and found it way too easy to score a touchdown and it is to hard to defend, not to mention the online play is extremely lagged.

Would a "Fanboy" give the game just a B+? I pointed out the game's flaws and qualities alike. Perhaps I gushed a little, but I really enjoy the game and I never liked Madden before playing it on Wii. So, for that I am sorry.

W00t Saints are in 3 screen shots (I live near New Orleans). This game is awesome.

Guys calm down. You can't decide to give the game a certain score. You can only rate each category by certain points. It's not our fault the grades come out like they do. As for me, I don't think I would like this game. I've been playing Madden since the 2000 version, and there aren't many differences in newer versions.

Rip Sean Taylor. I'm not updating the roster so Sean Taylor can stay in my game.

RIP Sean Taylor. The Redskins will never be the same without you.

So far this seems a little less responsive than previous versions, albeit more fun to try to figure out. Overall I like it but I think it's closer to a B- personally, the controls, while original and new are a little awkward.