Pirates of the Caribbean: At World's End

Published by Disney, Developed by Eurocom

Pirates of the Caribbean: At World's End review

The rum is still gone... savvy?

In a way, the Pirates of the Caribbean games have been a metaphor for Jack Sparrow and alcohol. They have some taste and flavor, but are always missing some. This time around, the game tries to augment the rum with the familiar characters, locations and antics that made the movies popular. Even more appeasing is the intuitive nature of the wii-mote controls, making for a plentiful swashbuckling experience. But does it break the pirate curse that seems to be haunting the series since the first movie arrived?

Unlike the first game where you play as the infamous and egotistical Nathaniel Hawk, this features playability of Captain Jack, Will Turner, Elizabeth Swann and Captain Barbosa. Each handling a sword, which is coerced by the hacking and slashing of the wii-mote. Players are well equipped with varying moves, such as a simple thrust, a timely parry and even a grabbing move that can rupture an enemy right in the coconuts. Since the motions equate similarly to those in fencing, the game takes a lot of dexterity to play and may have your hand feeling sore. Aside from the usual cutlass, the character utilizes a one-shot gun, throwing knives and grenades. 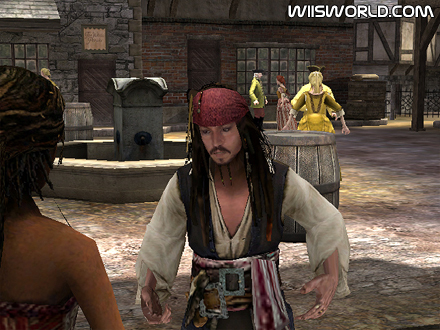 While the game is titled At World's End, the story contains action from both Dead Man's Chest and At World's End. This means you will be able to reenact many swashbuckling scenes, such as the duel on the rolling wheel and the epic showdown with the Kraken. While the game had a lot of material to use from, you will probably the beat the game in the time it takes to watch the movies. However, that is where the game is saved by the challenge and dueling modes. Savvy?

In this copious mode, characters must successfully complete challenges of killing a set number of enemies, numerous combos and loot challenges, where you try to earn a large amount of money. Completing these challenges will result in unlocking characters, such as the malicious Davy Jones and the tragically awkward Captain Teague. The unlockable characters are so great, that even Villager 5 gets a chance to be in the spotlight. After a while, dueling mode will be unlocked, which allows you to test your vindictive swashbuckling against your friends.

Graphically the game has some detailed environments, which include Port Royale, Tortuga (where Jack is still getting what he does not deserve), Singapore and even the derelict remains of Shipwreck Cove. While the backgrounds seem vivid, the player models do not seem to perfectly model their actual counterparts. Jack himself is the closest to his original appearance. Speaking of Jack, he is still up to his frugal hijinks, which include feigning a conversation with a bar owner, so pirates can successfully raid the rum and well... trying to get rum. The game also includes moments called Jackanisms, which makes players quickly complete motions and press buttons to execute an occasionally comical action. 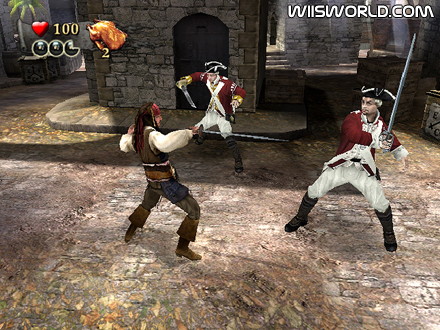 Since filming was exerted in total brevity, the actors could not lend their voices. Luckily, the voice actors they did get manage to sound similar to the actual characters. This is a saving grace, since Jack and other characters will exclaim a quick jibe and comment after each kill. The game also manages to contain the same music, intuitively putting a sonorous tone into the rage of swordfighting.

Other side features include playing in mini-games, such as poker and pirate dice, which allows you to increase the pirate's already great loot. The poker games are actually better than some poker simulators, because they include poker tokens to stir up the rules and escalate the odds in Jack or Barbosa's favor.

While many people will reproach the game by the fact it is a tie-in adaptation, At World's End still pulls out some sweet and savoring features, just like an old bottle of rum. Fans will enjoy the many themes and elements from the series implemented in the game, and help enjoy the pirate legacy while it lasts. Or if you just want to sit down (or actually stand up since this is the wii), then you will find AWE to be an exuberant experience. Savvy?

Cool. I was gonna get this game but I got Mario Strikers instead.

Yeah. My dad got this for a birthday present so I decided to review it.

Very nice. Not many people would take the time to review a movie game in the first place. Even fewer would have inserted so many inside jokes. Great job.

Hmm. I think this is probably my best written review, but no one seems to have noticed it. Either they don't agree with my score or it was just outshadowed by the Super Mario Galaxy review.

I'm trying to find out how to unlock duel mode on the game. I have almost beat it and still duel option is still locked.