If you're looking for a platformer Rayman game, this isn't for you. But you'll still like it anyways. Although it's a little confusing at the beginning due to an unfortunate lack of storyline, what happens is Rayman's world is overrun with large, deranged creatures called Rabbids, that's rabbit with a d. Why? Don't ask me, I'm not French.

You're plunged immediately into gameplay after the opening cutscene. You start out in a Colosseum where the stands are filled with what looks like an angry mob of Rabbids, complete with four gates to enter and a giant gate that will remain locked until you complete at least three minigames. After you beat three or all four minigames and the big gate's minigame, Rayman is rewarded with... a plunger. You will then be brought to your cell where you can replay old minigames, listen to songs you've unlocked, change your costume, view your progress, and go to your door to repeat the process again. 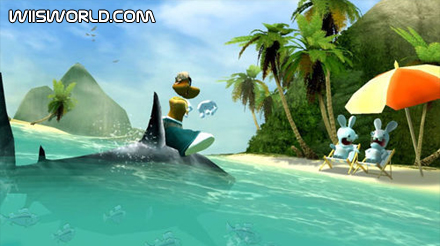 As you progress through the game, your cell and your entry and exit from it will undergo three changes, one such being going from you being thrown into your cell by a particularly large, intimidating Rabbid to walking down a red carpet as Rabbids on the side of it sing carols and throw confetti.

The minigames have a VERY wide variation with almost no two games having the same controls, and yet many have one thing in common, humor. Unexpected humor in many cases. For instance, in one minigame, you try to bowl over Rabbids as if they were pins. I expected they would be bashed out of they way like in cartoons but it's much more satisfying. Instead it slows down and shows each one taking the impact from the barrel, getting knocked down, knocking over other Rabbids, and eventually falling off of the platform they're on into a canyon.

Another game is one where you listen to the sounds of a baby pig Rayman is holding as you navigate your way to it's mom. If you mess up a Rabbid suddenly pops out of the ground and immediately torches the pig. Each round of minigames also sports a dance stage where you shake the wiimote and nunchaku in rhythm to the tune playing, and either a warthog racing minigame (as in the animal), or a western style shooter, where you use a plunger gun and a grappling hook where you can grab Rabbids and use them as a shield or ammo.

Each minigame takes advantage of the wiimote's capabilities to present challenge and fun. Aside from the minigames though, there's not much else. The music's not bad but it's not something that you'll be humming along to, unless it's a dance stage. As for the graphics, it looks like a late Gamecube game, but of course, so do the rest of the Wii games. Despite this and the short time it takes to play through the game, the fun you'll have far outweighs it.

KLC: This game is very enjoyable for all ages, anywhere from the young kids to my parents and then me in between.... read more

AdamnJohnson: I've never once paid attention to a Rayman game until now. Rayman Raving Rabbids is a collection of 70+ mini... read more

Peter Ambruso: Once you pick this game up, you can't put it down. It's amazing! It's not bad to lose a couple of calories... read more