Has Ubisoft finally fit the pieces together?

Samurai films and Spaghetti Westerners are second only to Bruce Lee, Godzilla, and the golden age James Bond movies when it comes to films I love. Which is why the original Red Steel was a large disappointment for me, due to its poorly executed sword and gun combat. It became especially disappointing after seeing how well Twilight Princess and Wii Sports Resort executed the same style of sword play. However I'm not here to beat an already dead horse, but to see if Ubisoft's extended development time and access to the Wii MotionPlus has made the sequel Red Steel 2 worthwhile. With that said time for me to ready my samurai sword and 45. colt revolver. 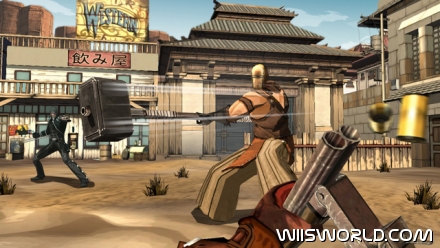 You play as random, nameless, samurai, cowboy, bad-ass-man (who for some reason has belts covering his face) on a quest to avenge his clan. Off the bat you'll notice the sword controls are well improved. The sword on screen won't mimic you perfectly but it's more than enough to function smoothly. The core gameplay consists primarily of sword combat, with gun play being more secondary. There isn't much to the game other than combat, but don't worry. You'll gain a multitude of new sword moves, upgrades, armor and weapons to keep the game from feeling repetitive. There's a wide variety of enemies as well from hulking, heavily armored, hammer wielders, to swift gunslingers, all of whom have different strengths and weaknesses. The game can get especially difficult when you fight mixed groups of these sorts of enemies. Add all that to smooth sword controls, a smart auto-lock on system, and the ability to fight interchangeably between sword and gun, and you've got yourself some very solid, well varied, combat.

Outside of combat you'll crack safes and break crates to gain more money. There's a fair bit of backtracking though, and if you want upgrades you're going to need every cent you can get so you'll be breaking crates a lot for money, which gets a bit tedious. The biggest complaint I'd have to make is the quick time events. They're irritating, unnecessary, and break the flow of what would otherwise be well done cut-scenes. However none of these complaints make the game bad, and Red Steel 2 hits the mark where it's important. 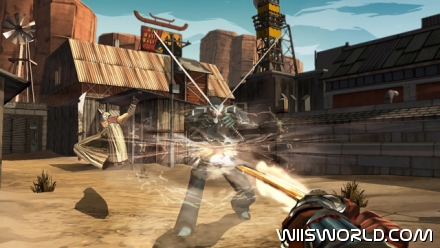 The music in the game strays largely towards a western style. There are several eastern ones, but the important thing is that the songs are good. Maybe not "The Good, the Bad, and the Ugly" good (ECSTASY OF GOLD IS SUCH AN AWESOME SONG), but good tunes regardless. The voice acting and writing's a little cheesy though, but you can always skip cut-scenes if it ends up bothering you.

One of the biggest improvements Red Steel 2 makes is the art style. Gone is that dull, gritty, realistic style and in comes a colorful, well detailed, east-meets-west art aesthetic that makes the game feel like a cross between "The Seven Samurai", "Mad Max", and a spaghetti western. The cut-scenes may be prerendered but they stick to the in-game graphics nicely and are very well choreographed. Other than a few little frame rate issues, the only big complaint I think someone could make is its lack of blood. Don't get me wrong, an action-heavy game doesn't need blood to be good, but when you hear a game with the words "Red Steel" in it blood should be what you expect. Oh well the graphics overall look great. 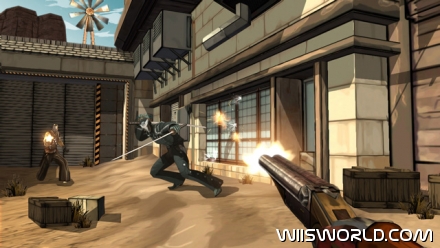 Playing through the game took me around 11 hours and it'll likely take you roughly the same, depending on the difficulty you choose. While the game is fairly linear, you also have multiple difficulties, and several challenges and side-quests. The amount of time you spend on this game depends how much you can get into the sword combat, but I know that I for one will be playing through it a second time (the combat's that fun). A lot of people have complained that there's no multiplay, but cooome ooon people, aren't there enough multiplayer FPS's as it stands? Tacking on a half-ass online multiplayer mode does not magically make a game infinitely replayable.

Ubisoft realized the mistakes they made in the first Red Steel and improved upon it greatly. Red Steel 2 is far more reminiscent of classic Beat-Em-Ups, rather than First Person Shooters (In a REALLY good way), and is one of the first games I've seen to properly utilize motion controls and sword fighting. It's not perfect, it's not a triple A title, and it's not for everyone. However it's a very good game, and I enjoyed it. With all that said I can't recommend everyone to just go out and buy it immediately, but it's definitely worth a rent to see if you'll like it, especially if you like Samurai movies and Spaghetti Westerns.

I finished RS2 this evening. Ran into a bad bug or two along the way and felt the story was maybe a bit light, but overall enjoyed it.