Published by Capcom, Developed by Cavia 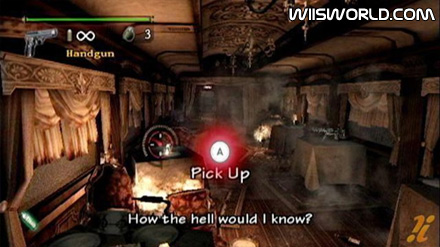 To begin, the feel of the game varies a lot depending on whether you use the Wii Zapper or not. At first, I started using the Wii Zapper. It was really fun and gave that real feeling of being in game, but sometimes when you fight a boss or a zombie who has latched onto you, you have to shake the nunchuck to cue an action to evade or counter the attack. The nunchuck which is firmly placed in the zapper.

The upshot of this is that you have to shake your entire gun's back end, which can get tiresome compared to just wiggling your wrist a little if you didn't use the Wii Zapper. In a boss battle, I almost recommend removing the nunchuck from the end of the Zapper, for sake of being able to quickly cue that action to evade attacks.

You also have to shake the nunchuck to reload mid-clip which is an action I suggest you take constantly. But for that, you can just tap the end of the nunchuck. It actually makes you feel kind of cool, tapping the back of the gun to reload your gun on screen. Guns are scrolled through by using the D-pad primarily, which I found the most effective way to switch guns and get to grenades. 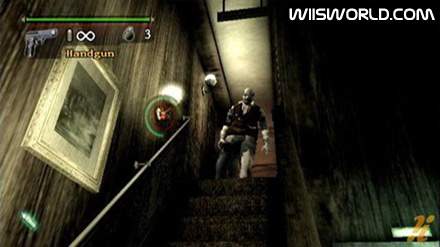 Note that these control issues mentioned are minor. You'll likely be so immersed in gameplay that you'll ignore them.

In terms of gameplay, it's some distance from what you'd expect of a game that's on rails (meaning you move along a preset path). You actually get different paths to take, depending on whether you broke a certain obscure door, or triggered some event by shooting a small object etc. Sometimes the paths are a lot easier to find, as you're brought to them, but having the choice to follow your own paths makes this game feel that much less restricted, while retaining the elements of arcade shooters you wanted.

Aiming is a big part of this game. Unless you shoot the right spots on a zombie or other monster (yes, there are other things to shoot) you'll most likely get hurt. You can aim for the very top of a zombie's skull for a quick head-shot kill, or the knees to slow down approaching zombies so you can pick off ones in the distance to thin out your opposition. Or, you could use one of those rarely found grenades to basically decimate a group of zombies. Alternatively shoot that car near them to blow it up and take them down that way. For an arcade styled shooter, it brings an unprecedented amount of planning, which becomes internal after a short while of doing it. Pickups litter the ground as well, some out in the open, others being revealed from destroying certain objects and such. 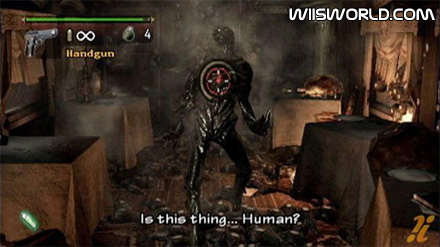 The bosses are amazing, bringing even more strategy into the fights with where you have to shoot, and evading their powerful attacks by pressing certain buttons as flashed on-screen. Although the fights follow a set path that loops, the sheer speed and adrenaline inducing make them something to savor.

Like the zombies it houses, this game doesn't die right away. At all. There are hidden levels, weapons and difficulties to be discovered as well as hidden items in every level that give more and more of a chilling insight into the past of Resident Evil. 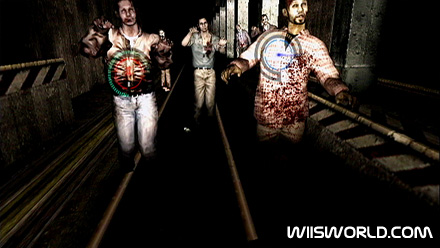 There's even a way to unlock infinite ammo for every gun for those fanatics who manage to get a Rank S on every mission for Hard mode. And for those who are familiar with the RE series, there's even a Handcannon to discover and the chance to play as HUNK. The amount of stuff to find is impressive, if you choose to.

Compared to other Wii games, the graphics are good and are very polished. You'll probably notice it while you're surveying your surroundings for zombies, but they're not anything revolutionary. 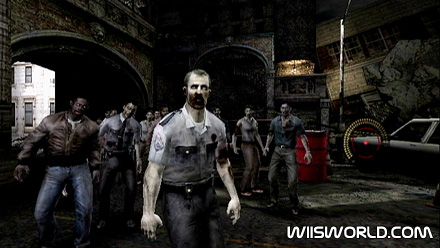 The music and sound effects are the real icing on the cake. The noise of dying zombies and monsters never gets old (except for this annoying grasshopper one that makes an irritating screech). The clicks and reloads of your guns are always accurate and awesome sounding when coming from the television and Wiimote. Add that to music which fits the ambiance of your surroundings perfectly. They even remove music at the right moments to really cause suspense. The voice actors are top notch also. 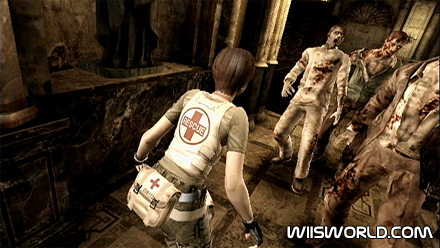 If you grew up in the arcades playing Time Crisis or the actual Resident Evil arcade game, and you own a Wii, this is a definite buy. Especially if you're a fan of the series and want to know how it all happened.

For those who aren't a big fan of either, it's definitely a considerable choice for renting. In all, this Resident Evil title definitely strengthens the Wii's library by adding a top-notch game with the maturity and gore hardcore gamers want.

Graphics do not make a game I get tired of hearing a game is bad because of graphics! What happened to all the real hardcore gamers?

I want you to quote exactly where I said that other games are bad because of their graphics :|.

I don't think that statement was directed at you.

I'm just tired of wannabe gamers rating or thinking a game is bad because of graphics. I don't think gamers today really know what they are talking about.

You realize the nunchuck is not supposed to go in the zapper for this game, don't you?

Capcom's version of House of the Dead is one fun game. It had that addictive arcade feel to it; however, I think Capcom just rushed the game considering it took place from games we've already seen on the GameCube.

I had the zapper and didn't like it- for reasons above, but also because you are shooting with your forward hand. Got a better gun called Wii Perfect Shot from a store and it's much better. Looks like a standard hand gun and you just hold the chuck in your free hand. Highly recommend this gun.

BabyWii: Now we all watched resident evil extinction in the cinemas didn't we? The so called final chapter or so we... read more