Is it the premier shooter for Wii?

The Conduit has been touted up as the definitive FPS exclusive to the Wii. It has gotten much press coverage and has left many Wii owners drooling on their laptops. But hype aside, The Conduit has finally hit store shelves and is ready to be taken in by the consumer, but is it truly worth your hard earned cash? Continue reading and I'll tell you.

Controls are so important for this type of game, the button layout used is simple enough. The B button fires your weapon, the A button is to jump. The D-pad is used to change your weapon while the + and - buttons are used to reload and to whip out the ASE (All Seeing Eye, a device described later). Motion controls have been drafted in as well. Flicking the Nunchuk throws a grenade, while thrusting the Wiimote forward initiates a melee attack. 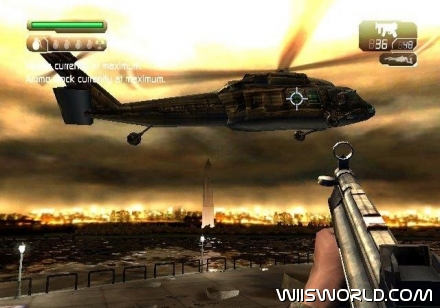 It's not the simplicity of these controls that make The Conduit so interesting, it's how well implemented they are. The Conduit boasts the most customizable and fluid controls on the Wii. Everything from turning speed to HUD layout can be redefined, but for me, the default settings are near perfect and I felt no need to tinker with them while playing through the campaign. This level of customization gives the game a lot of accessibility and adds depth that the hardcore gamer can appreciate, while also being approachable to the casual gamer. First and third party developers take note.

The single player campaign can be completed in about 6-8 hours. I found this to be the weakest link in the package. The story follows a special services agent named Michael Ford. He has been hired by some sort of government corporation known as the Trust to find and eliminate a terrorist that goes by the alias Prometheus. But something bad happens and Ford is thrust into a conspiracy yarn about aliens and other generic Sci-Fi dribble. The story is obviously something we've all heard before, and to make matters worse, it's presented in a horrible manner. Instead of cutscenes, we're treated to text and VO. This is disappointing because later in the game there are some interesting plot developments that, if implemented better, could have been rather gripping. Also, the game's ending is a complete disappointment, without climax or closure to the story. In a way, this leads us to believe a sequel is inevitable. But still, I would have preferred something more satisfying.

Gameplay in the campaign has its fair share of flaws as well. For one thing, The Conduit never has any epic set pieces. Instead, the player is largely confined to tight corridors with enemies strewn across the map. This makes everything feel rather dull and it soon becomes repetitive. Another annoyance is the implementation of the ASE. You use this device to scan the environment for door switches, to disarm invisible mines, and to unlock hidden weapon caches. This gameplay element is overused and breaks up the action consistently to the point of it being a major frustration. Overall though, the single player experience is serviceable and is at least worth one play through. 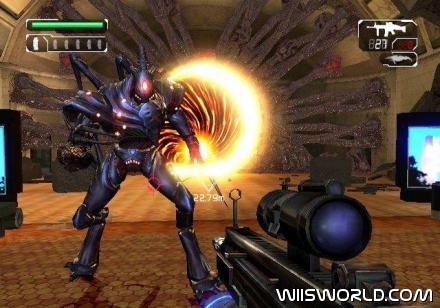 The online multiplayer portion fares much better, it features a wide array of gameplay modes that include your standard deathmatch, team deathmatch and capture the flag. But The Conduit also features its own unique variations of modes as well. One example would be Bounty Hunter, which tasks the player to kill the person who has been specifically tagged. Killing that person rewards you points, while killing someone else who is not tagged deducts points. But you must be cautious, for you are tagged also, and another player will be hunting you just as you are hunting someone. The game modes are fun to play and I haven't experienced any lag while connected. As a bonus, the game also supports Wii Speak, which allows you to talk to your friends while playing the game. This alone shows the developers' commitment to the experience and is something to be commended. The multiplayer also has a ranking system.

Now to talk about the technical side of things. Overall, I think High Voltage Software did a great job. The game boasts bump mapping, bloom, lighting and particle effects, and some solid animations. On the negative side, there is some pretty ugly art design noticeable throughout the game. Music in The Conduit is quite generic, but gets the job done adequately. The sound effects used for weapons are appropriate and the voice work is well acted. As a package, there are no big problems on the technical portion for the game.

So is The Conduit the best pure FPS on the Wii? Well, yeah. But it's also the only one on the Wii and that is something to be taken into account. The game has some distinct flaws, but the solid controls, impressive graphics and multiplayer minimize these niggles and make The Conduit worthy for purchase.

A- is too high. I think after reading the review it should have a got a B- or B at best.

There are certainly some flaws which I describe in the review, but I think an A- is fitting.

I believe it deserved a B+ at best, but that's just my personal opinion. It's hardly a legit opinion since I seem to quickly get bored of any FPS that isn't from the metroid prime series or golden eye for the N64. The game itself wasn't bad. I just think parts of it were overlooked since Sega overhyped its launch.

Wiibit I'll agree that the online can be a pain cause lag but it's the best part of the Conduit. However the player's running speed can be adjusted I believe and I do agree with the art direction. All the environments seem bland. They should have done something like what Red Steel 2 is going to do.

Wiiboy101: You're right the character speed is terrible. They could have made a run button or simply make the characters themselves faster. Most of the stages seem pretty small to me, but when it comes to the ones that are big yea they suck. The graphics are ok but they're nothing compared to Galaxy or Corruption.

If you hate the game, go back to WaW and stay away from here. Although, the online wasn't the best. You guys (the reviewers) may have been using a Wi-Fi USB Connector, and maybe that came out to a lagless fun time, but I have Wireless and I get lag that isn't noticeable at first, but it's there. Messes up my Streak at times. With that, I would have given it a B+, just cause of that little lag felt. Oh, did I mention the constant disconnects I receive?

The problem is that if you have cod 5 waw, there's no point in getting the conduit. Although I don't own the game, the gameplay I've seen off youtube looks similar to cod. The only differences are graphics and the fact conduit is in the future. That's why I haven't bought the conduit and don't plan on it at the moment.

The reason there is no climax at the end is so that they have an excuse to make a sequel to the game. In fact I've heard rumors about "The Conduit 2". I'm not saying they are correct or even solid proof of a sequel, but I've heard that in the Conduit 2 they plan to have at least 2 player co-op, vehicles, and that there will be cutscenes in the game this time and you will be navigating an alien planet.