Why haven't you played it yet?

On October 23, 2008, Zack & Wiki: Quest for Barbaros' Treasure was unveiled to massive critical praise and support. Popular gaming website IGN started a "2007 Buy Zack & Wiki Campaign" in hopes of enticing support for the quality third party Wii effort. At the time of this review, the game has an impressive overall score of 87 on grade aggregate website Metacritic, good enough for 7th overall among current Wii retail releases. Zack & Wiki has gone on to sell more than 300,000 copies worldwide, which certainly isn't a failure, but is well under par for a piece of software that was so heralded by the gaming community. Capcom doesn't seem to be in any hurry to start production on a sequel, either. Given the sales numbers, it's tough to blame them.

Well, my fellow Wii's World readers, Capcom's loss is your gain, because Zack & Wiki - originally released at a bargain price of $39.99 - can now be had for less than $20 in used condition at your local Gamestop. Go searching for the title online, and you can probably nab this diamond in the rough for less than 15 bucks. Zack & Wiki isn't without its flaws, but it truly does warrant the immense amounts of praise it has been given, and there's really no good reason not to own it now that the price is so explicitly cheap. 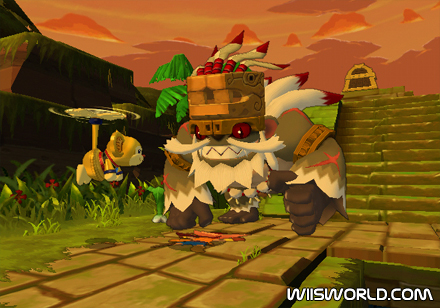 Zack & Wiki carries on the traditions of classic PC point-and-click adventures like the Monkey Island series. Using the Wii remote, players point at the screen and click objects within the environment to interact with them. Zack then scoots over to the pointed location, and the game enters what is, essentially, a first person view mode. It is here where the unique motion sensing abilities of the Wii remote are put to use, as players are tasked with moving blocks, throwing switches, slashing swords, and a wide variety of other activities. Each level is essentially one giant puzzle, and the entire game lasts somewhere in the field of 14-18 hours, depending on how adept you are at puzzle solving. Difficulty ranges from being laughably easy to inducing controller-hurling frustration. All puzzles, however, leave you with a huge sense of satisfaction upon completion, and the way in which the game's multiple elements gel together keeps you hooked for the entire adventure.

Zack & Wiki's graphics aren't going to shock people. Nor will they win any 'Wii is capable of next-gen graphical production' arguments either. What the game does is very easy on the eyes and helps support the lighthearted nature of the whole package. Everything is presented in a cel-shaded style similar to The Legend of Zelda: Wind Waker. There are some nice heat distortion and lighting effects thrown in, and plenty of bright, varied colors are used. But cel-shading, in my opinion, can only take a game so far in graphical critiques. Super Mario Galaxy has set a standard for graphics on Wii, and looking at the two games side-by-side, there is hardly a comparison at all. Zack & Wiki's graphics are too good to be considered shabby, but too cartoony to be called 'next-gen'. It's really not much more than a half-step above Wind Waker.

Musically, the sound is awesome. Capcom has always been known for great soundtracks (Mega Man series, anyone?), and Zack & Wiki is no exception. Each tune has a grandiose presence that fits the pirate theme like a rubber glove, with full orchestra arrangements that vary from mellow to upbeat depending on the mood and situation of the current stage. The voice-overs, on the other hand, are rather limited. One-word remarks come with full text statements and remarks, and the voice work doesn't really extend beyond mere accompaniment. Wiki's voice is particularly grating, as (s)he sounds like a whiny, prepubescent Asian girl. It's not a good thing, believe me. 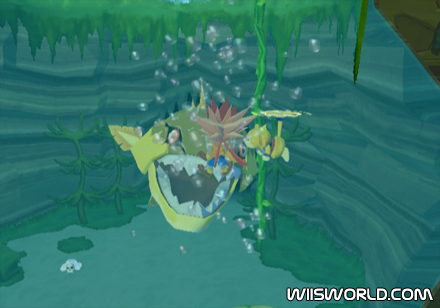 The gameplay works very well. Most of the Wii remote motions are spot on, though a few clunkers come off as finicky and broken. The wide arrangement of tasks though, combined with the complex and interesting motions, means that a few problems here and there are both expected and forgivable. What may really frustrate gamers is the presence of 'die-and-retry' gameplay mechanics. A portion of the games puzzles aren't completed with ingenuity and skill, but rather through a successive repetition of failing until the right course of action presents itself. In classic action games like Contra or even Capcom's own Mega Man, this is an integral aspect of gameplay. But those games are twitch-based; calling on a gamer's sharp reflexes instead of his/her sharp mind. Zack and Wiki is the opposite, so having some puzzles like this can be extremely disappointing, even wearisome. The game's second sin is in the replayability department. The big appeal of puzzle games is in the process; you slowly figure things out and discover ways to get past the obstacles set forth. Therefore, once you complete the game, there is little desire to go back for a second run. Once the solutions present themselves, any challenge that was once in place is quickly evaporated.

These issues aside, you owe it to yourself to play Zack & Wiki. As we reach the end of 2008, the game is now available at a cheaper price than the Playstation 2's "Greatest Hits" series of games. And while it lasts, this is some of the most fun you can have with a Wii remote in your hand. Whether you shove it to the top of your Gamefly GameQ, go buy it at it's ludicrously low half.com price, steal it from your rich little cousin who forgot it amongst all his PS3 first-person-shooters, or plead and beg with Capcom to send your broke ass a free copy, find a way to play Zack & Wiki. You'll be glad you did. 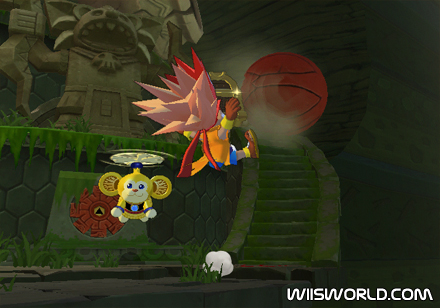 The adventure is stellar for the 14-18 hours it lasts, but there's hardly any reason to come back once you're finished. 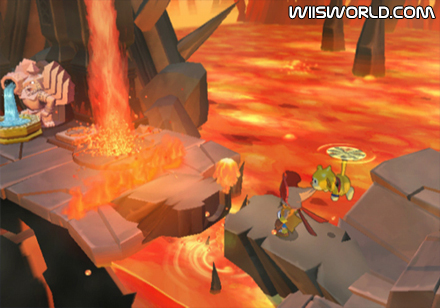 The cel shading looks nice and all, but we've seen our little white boxes do better, too.

Music is so good it could be used for a fourth 'Pirates of the Caribbean' film. If only there was a way to shut up that stupid monkey.

I probably would've gave it a B-. It's just a point and click adventure. Looks good but the gameplay isn't amazing or anything. Fun game though! Nice review.

In my top 5 best games on the Wii.