Despite Bayonetta becoming a relatively successful game on the Xbox 360 and PlayStation 3, developer Platinum Games' somewhat inconsistent track record has led to the long awaited sequel becoming a Wii U exclusive. Though many fans of the original have balked at having to buy the system for this continuation, players who do have a Wii U can experience one of the best games on the system.

The original Bayonetta had the titular heroine in a fairly typical amnesia story, in which Bayonetta (or Cereza to those who know her) learned that she was one of the Umbra Witches. The Witches, along with the Lumen Sages, were dedicated to keeping balance among the forces of Paradiso, Inferno and Limbo. Bayonetta was a 'loose end' however, and was hunted by angelic forces to try and regain dominance over their enemies. Bayonetta 2 finds our heroine back in her prime but with the stakes even higher; in the span of one day Bayonetta must save the world from the god of chaos and save her best friend's soul from being trapped in hell at the same time. No pressure right? 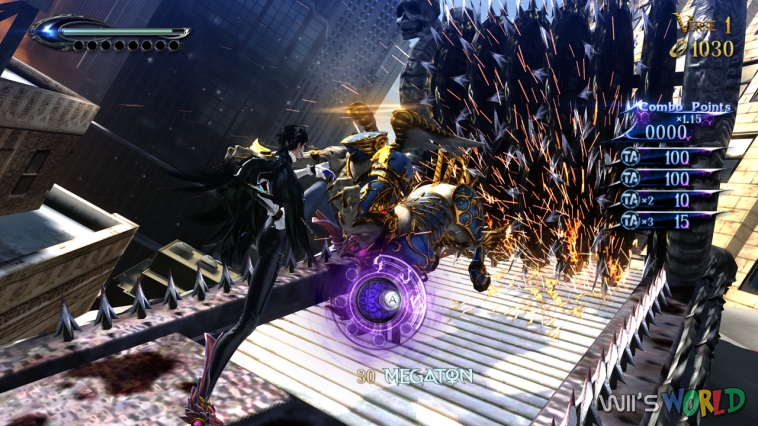 Bayonetta and its sequel are twitch based, high-intensity action games that are not for the casual gamer. Taking inspiration and design from titles like the Ninja Gaiden reboot and the Devil May Cry series, these types of games are part fighting game, skill based and heavily rewarding when players do well. To some extent, titles like Bayonetta 2 feel like an evolution of the old beat-em up genre, as the majority of the game involves fighting enemies and boss fights.

As the player progresses, they can earn Halos as a form of currency. Using Halos will grant the player additional moves, powers, and upgrades. While doing this can make things easier in the game, getting enough Halos requires genuine skill, as the amount of Halos granted are determined by the length of combos, item usage or the amount of damage sustained. In addition, Bayonetta has a brilliant design mechanic that has yet to be duplicated, Witch Time. Dodging at precisely the right moment in combat will grant players uninterrupted time to hurt enemies, rewarding skill by lowering difficulty slightly. This check and balance system is used through the majority of the game to great effect, and is one of the best demonstrations of Japanese game design.

In between fighting crowds of angels or demons, Bayonetta is largely free to explore the world around her for power-ups and collectibles, some only accessible after gaining new abilities. Some of these treasures are found in very out-of-the-way locations, but they are completely optional. Bosses take up their own chapters of the game. While the bosses in Bayonetta 2 are not quite as much fun to fight or as epic in scale as those of the first game, they still tend to be very challenging yet never unfair. There are also a few mini-games and a co-op mode, but both don't make up much of the game and are fairly forgettable. 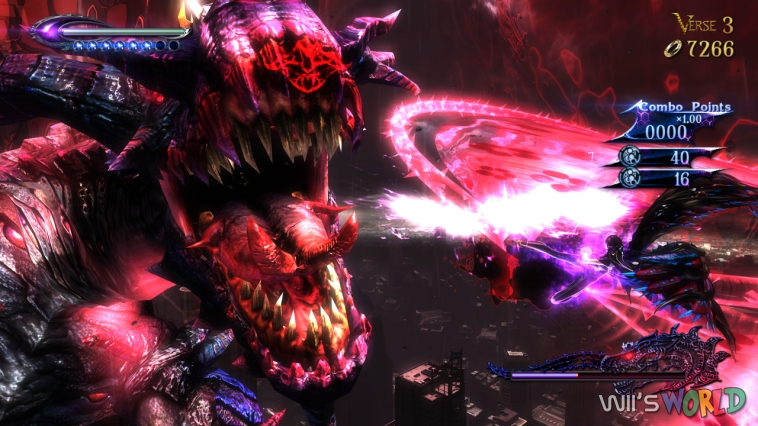 Bayonetta 2 is not the best looking Wii U game compared to Nintendo's own, but still has great art direction and technical performance. The game never has any slowdown and Bayonetta's expressive animations are wonderful to behold. More impressive is that this performance never strays in the more over the top stages. One situation has Bayonetta fighting a demonic dragon atop a giant building while flying high. Another boss involves both Bayonetta and her opponent fighting individually and their demonic/angelic contract giants at the same time. There's a twisting, writhing version of hell, a beautiful aquatic cathedral and more to please the eyes. Bayonetta 2 is a very aesthetically pleasing game, especially for the Wii U.

Bayonetta 2 maintains quite a few of the catchy and upbeat musical tracks from the original game, along with a good variety of new songs that fit their locations well. All of the original game's voice actors return, and most of the English actors are surprisingly good... with the exception of the newcomers, who either do not fit their characters or are cringe inducing. Thankfully, unlike the original title, players do have the option of switching to Japanese voice work if they wish.

Even on the basic difficulty, Bayonetta 2 is a difficult game and a complete playthrough will take most players about twenty hours. In addition to three more difficulty levels, the game also features various Nintendo themed costumes to buy as fun extras, some simply changing Bayonetta's look, while others (such as the Star Fox costume) changing her combat style slightly. To cap it off, the entire original Bayonetta is available on a second disk to purchasers, making a very good value for the money.

Ultimately, Bayonetta 2 feels like a game almost too good to appear on the Wii U, though truthfully players should simply be thankful the game was able to be made, especially with this level of polish. Fans of action games or those willing to put in some practice will love the title, though it is not for the faint of heart. No game is perfect, but Bayonetta 2 proves that with a little more effort, Nintendo could have third party titles just as good as Microsoft and Sony. If Super Smash Bros. had better online, it would be the best game of the year for the system, but as it stands, Bayonetta 2 is mine.