CTTT is actually a prequel to Super Mario 3D World, featuring our titular hero and his assistant Toadette looking for treasure and gold stars. Unfortunately, a humongous bird happens to want the same thing and flies off with one of the two in tow, depending on which of the game's episodes Players are experiencing. Yes, Captain Toad does not gender discriminate! 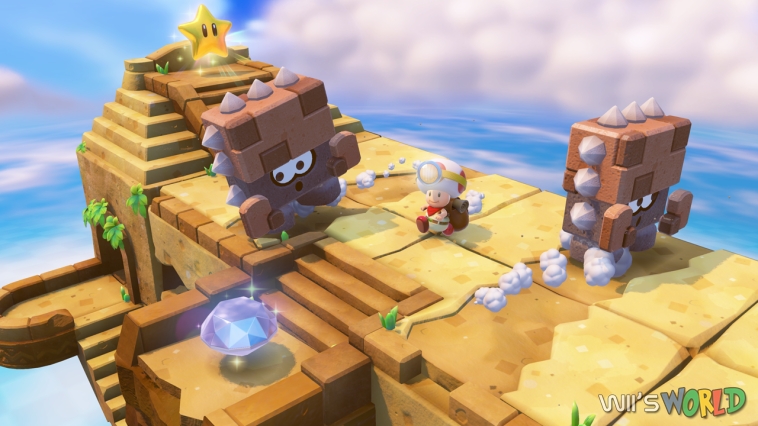 For those who have not played the Captain's first adventures, Treasure Tracker can be described as part puzzle, part adventure title. The two Toads can walk, run, pick up and throw Super Mario Bros 2 style vegetables and use items depending on the stage. Each stage is much smaller than a typical Mario stage, and resembles a diorama. The objective in each level is to make it to the end of the stage. In order to open every one of the game's stages however, players will need to find each of the three Super Gems cleverly hidden on each level. Camera manipulation is incredibly important, and players will need to do a little more thinking than they are used to in an average Mario platform title.

Despite CT not having as much agility or athleticism as the 'stars' of the Mushroom Kingdom, almost every level has new elements to it. One stage might incorporate a giant Pachinko machine, another could have steadily rising lava, a third may have turnip cannons etc. In fairness, not every level has genuinely new material, but the method in which elements are implemented once again demonstrates Nintendo's skill at gameplay and level design. In addition, the six boss encounters are well made but are also the same boss characters used three times each. Again, Nintendo shows that developers can get a lot of mileage by prioritizing gameplay over presentation.

Speaking of presentation, Captain Toad looks really good for a Wii U game... but in fairness, that doesn't seem too hard when the Mario characters and settings are done in such a cartoony, CGI fashion. Still, every area looks as good as, if not more so than the areas in Super Mario 3D World, so it is to the developer's credit that a smaller title was given some good graphical resources as well. 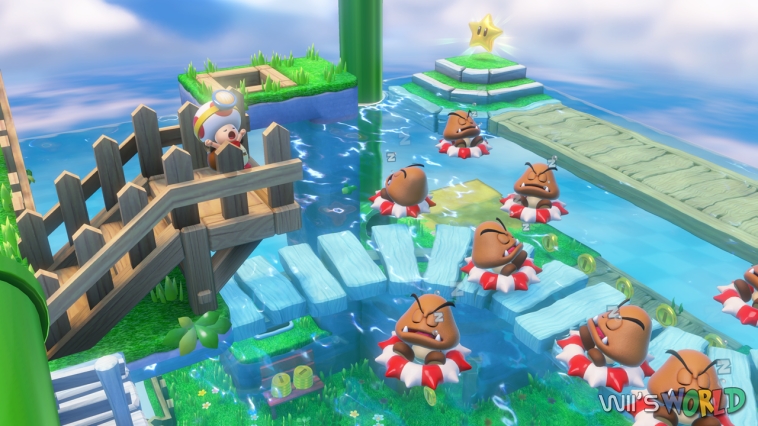 The game's music is surprisingly good, giving Nintendo's composers the chance to try something slightly different than the usual high-pitched Mario tunes. That being said, none of the music is particularly exceptional, though unoffensive. Captain Toad and Toadette get a few small lines, and are occasionally annoying, but cute too.

Now while Captain Toad's adventures are a lot of fun, they are unfortunately over far too quickly. The main game will likely only take five to six hours to finish with all gems. While each level does have an additional bonus objective as an achievement of sorts, there is little incentive to do them and most are not all that difficult. Finishing the game with all gems does open up some bonus stages, but sadly these are just remixes of earlier levels. Five are the beginning levels of Super Mario 3D World, and the rest are just slight variations on earlier levels.

While Captain Toad: Treasure Tracker is a surprisingly fun, original, budget title from Nintendo, the title still has a few rough spots. If it was ten to fifteen dollars less, it would be a must buy. As the game is however, it feels too short and too expensive. The good Captain is now definitely worthy of being a Mario star, so hopefully he will be given a sequel that makes true use of his treasure hunting talents.