Published by Nintendo, Developed by Retro

Donkey Kong Country Returns was released to both critical acclaim and the satisfaction of platform fans. With Retro Studios proving that it could make great games other than Metroid Prime, Nintendo fans were eager to see what would come from the company next. To the disappointment of many, Retro's Wii U debut is Donkey Kong Country: Tropical Freeze. Many expected better from the developer that almost reinvented the popularity of both Samus Aran and Donkey Kong. In a way, Tropical Freeze represents Nintendo's current business problems with the Wii U, even if the game itself is not actually bad.

Tropical Freeze begins on DK's birthday, not so coincidentally also the 20th anniversary of Donkey Kong Country. While the Tiki Tak tribe has been booted off DK Isle, a new group of marauding animals has come to conquer. The 'Snowmads' use a magical horn to turn DK Isle into a frozen tundra, with DK and his family blown off to other islands. 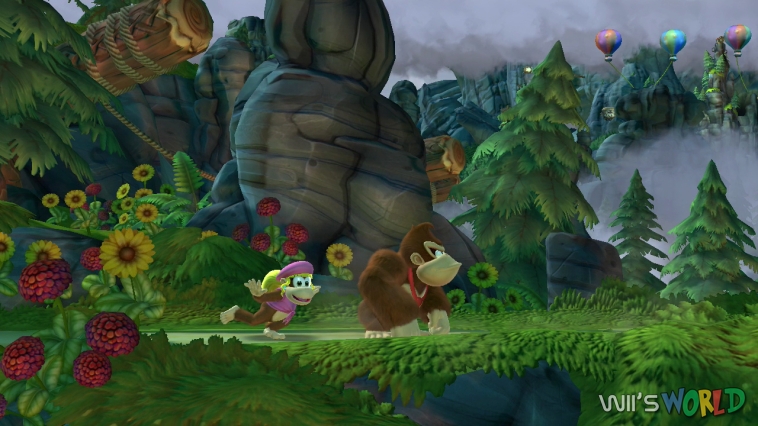 If players have already experienced Donkey Kong Country Returns, Tropical Freeze offers virtually nothing new. The game is side-scrolling 2D action, has quite a few collectibles and secret areas, and is very challenging. Admittedly, there are a few minor changes to the formula. Diddy returns to aid DK, and joining him are longtime absentee Dixie and first time in play Cranky. While Diddy once again acts as a slow hover, Dixie adds a sort of hovering double jump and Cranky's cane can be used as a pogo stick just like Scrooge McDuck's. Players can almost always choose which Kong to accompany them when given an opportunity and all three team-ups can use the new 'Kong Pow'. This move clears a screen of enemies, and turns them into items which vary depending on the character used. While Cranky and Diddy can be useful at times, Dixie's jump and Kong Pow move have made her the current fan favorite.

The only major addition to the formula are swimming levels, which work surprisingly well for this type of game and are actually a highlight of Tropical Freeze. KONG letters still open secret levels in each world, but the alternate pathways which were opened by buying keys are gone. In place of them are secret exits in normal levels, which feel much more true to the genre.

Funky Kong now takes Cranky's place as the resident shopkeeper. Items like extra hearts and the help of the Item finding Squawks the parrot are back, alongside a few new additions. The Super Guide has been abolished, but items like a balloon to save players from pits and a crash guard for vehicle stages help ease some of the game's difficulty. 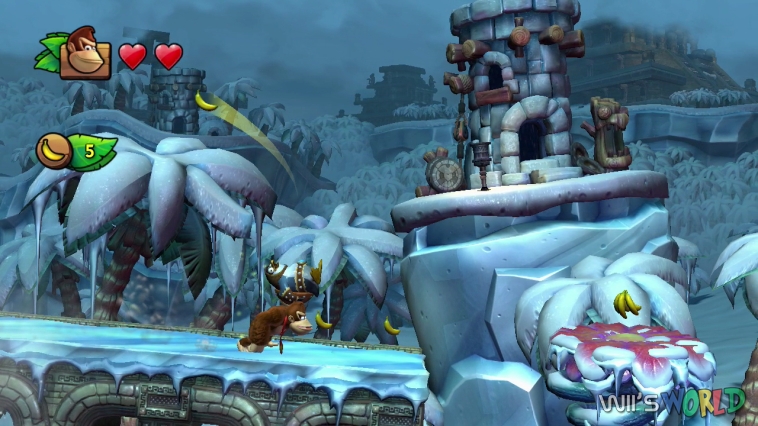 In a way, Tropical Freeze is just as, if not more difficult than DKC Returns was. There are more vehicle stages, difficult platforming segments and the underwater stages have bucked series tradition by giving only a limited supply of air at a time. As mentioned earlier, items can be bought to ease the pain and coins are fairly plentiful. The game is definitely hard, but almost never feels unfair. Boss fights are surprisingly easy though, and disappoint slightly.

Co-op returns and again, is not that helpful. Instead of taking advantage of having four Kongs in the game, only two players are available at a time in Tropical Freeze. Playing with a friend is more a hindrance than a help, as they might die or be away when a critical jump is about to occur. The game was designed for one player, and it is best that way.

The graphics are quite good, but only compared to previous Nintendo games. Compared to the juggernauts that are the PS4 and the XBox One, a game like this feels slightly underwhelming. That being said, Tropical Freeze is a huge step up from DKC Returns. The backgrounds look great and well detailed, with effects like shadows, wind and rain all contributing to a dynamic environment. While Retro stuck with the standard 'Jungle' and 'Ice' stages for two of the game's worlds, the others are fairly unique and fun to look at. The highlights include a burning Savannah and a jungle made up of foods like Gelatin. Tropical Freeze is not the technically finest game out there, but it is definitely one of the finest looking 2D games. 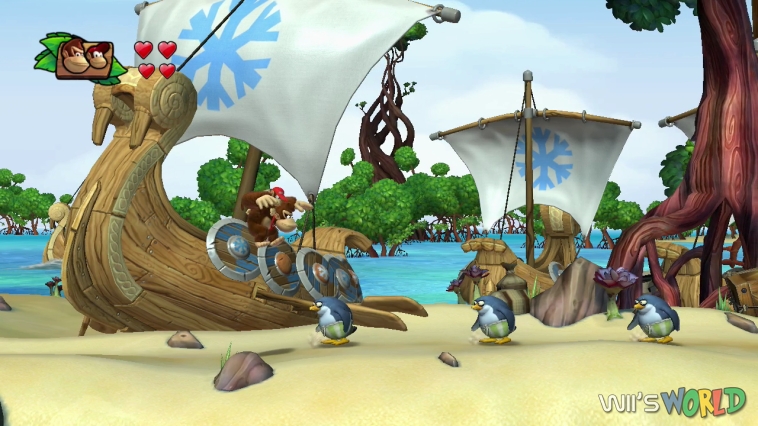 Sound is especially impressive. While the sound effects are not particularly noteworthy, the music in Tropical Freeze is spectacular. Retro made the wonderful decision to bring back DKC series composer David Wise and the results 'speak' for themselves. Not only does Wise bring quite a few new tracks to the series, he also has worked to create some truly stunning remixes of old DKC tracks. Two of Wise's most famous tracks, Aquatic Ambiance and Scatterbrush Symphony are recreated to being almost unrecognizable. These are used alongside tracks taken from Diddy's Kong Quest and result in a much more varied and likable selection than the music in DKC Returns.

For all of Tropical Freeze's positives, the amount of content feels slightly underwhelming. The game features only six full worlds, as opposed to the eight in DKC Returns. While it is true that individual levels are larger in Tropical Freeze, the second game still falls short. Secret extra levels are once again included, but disappointingly are the same sort of temple levels from Returns. This is strange considering DKC Returns 3D featured extra levels that felt more natural to the world they were in. Puzzle Pieces and time trials also return, with added leaderboard functionality, but only add anything if one cares about that sort of thing. The game does feature a hard mode, but that was also in Returns.

Donkey Kong Country: Tropical Freeze is disappointing in a way that echoes the problems with Nintendo's Wii U approach. There's little content after about ten hours, there's very little difference between Tropical Freeze and its Wii counterpart, and the game feels overpriced compared to the games on Next-Gen systems. Tropical Freeze is definitely a good game, worth the time of any platform fan, but not worth the price of a Wii U. Nintendo likely will continue to get a chilly reception from players, but not in the way this game wants.