Do the fruits of labor taste twice as sweet?

Pikmin is one of Nintendo's most interesting properties. It lacks the mass market innocence of Mario and is set in a world atypical of the traditional fantasy or science fiction of Zelda or Metroid. It mixes elements of action and strategy for a gameplay style that few have imitated but is still a great deal of fun. Pikmin's story also touches on dark elements that neither Nintendo nor video games in general are even willing to whisper. Now, nine years in the waiting comes Pikmin 3. So does this long awaited sequel prove a worthy legacy to the Pikmin name, or is it a sign of Nintendo's continuing misfortunes with the Wii U?

Pikmin 3 once again takes place on what is surmised to be a post-apocalypic, yet flush with greenery version of good old Planet Earth, now given the designation PNF-404. The third entry in the series introduces three new space travelers from the planet Koppai - Alph, Brittany and Charlie. Due to a lack of proper planning and overconsumption (gee, that doesn't sound familiar AT ALL...), the three end up finding and crash landing on PNF in search of sustainable food, specifically fruit. Though Pikmin 3's narrative isn't a cinematic showstopper, it nonetheless touches on issues like desperation, hope and empathy, even if not directly. So does a certain treasure hunting space captain or his assistant show up during the trio's adventure? Well, that would be telling... 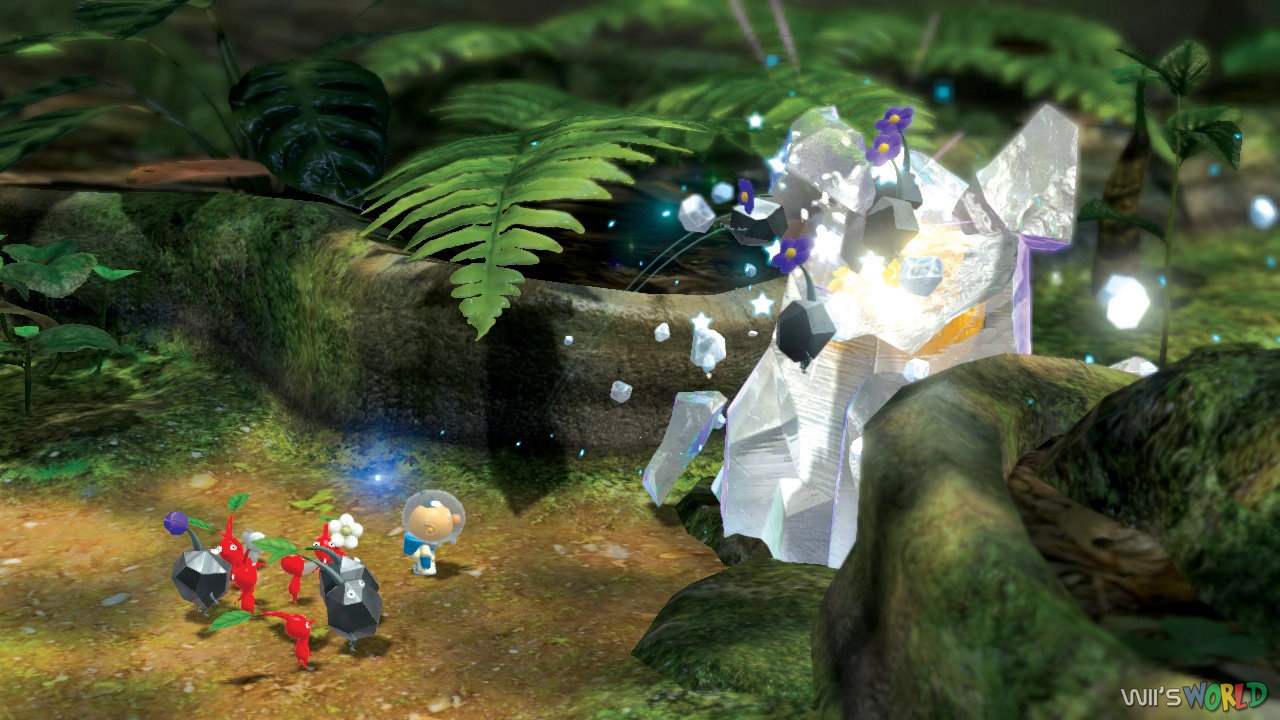 For the most part, Pikmin 3 largely plays the same as the previous two installments. Players guide up to 100 'Pikmin' in order to help Alph, Brittany and Charlie find and gather a variety of fruits. Along the way, they'll run into broken bridges, dark caves, tough walls and a vicious variety of flora and fauna. Players are given a large variety of control options from the Wii U GamePad, to the Pro Controller to the Wii Remote and Nunchuck. Though any of the control schemes are serviceable, the best and most accurate is the remote and nunchuck. Pikmin 3 has also changed two minor things that will be noticed by series veterans. First, the method of moving a player's entire group of Pikmin independently has been removed in favor of locking onto a target and having all Pikmin charge at whatever obstacle or enemy the player wants. The second and more minor change is that there is a slight delay when tossing Pikmin compared to the previous titles. While these changes are easy to deal with after a bit of time, the game unfortunately does not do a good job of explaining them and in fact does not explain how to lock on AT ALL! Let this reviewer save you some time: use the Z trigger on the Nunchuck to lock on. Hope that helps!

Pikmin 3 also emphasizes different Pikmin strengths, and using teamwork to overcome obstacles more than its predecessors did. While Louie was a decent scout and occasional meat shield in Pikmin 2, most players only used teamwork in the game's mission mode. In Pikmin 3, teamwork between all three of your intrepid explorers isn't just touched on, but is necessary to gather fruits and get past obstacles, often requiring all three characters to be used in tandem. Likewise, the game emphasizes using a wide variety of the various Pikmin. Red Pikmin are once again necessary to defeat fire spewing enemies, Blue Pikmin are the only types that can go into water and Yellow Pikmin are used now to destroy electrical barriers and close loose electrical circuits. The purple and white Pikmin have been replaced in Story Mode by the new Rock and Flying Pikmin, which have a more distinct identity than their forebears. Rock Pikmin are bulky and powerful, necessary to shatter crystal rocks but are more balanced than the incredibly powerful Purple Pikmin. Flying Pikmin meanwhile are weak against enemies but are incredibly mobile and effective against flying enemies. Each Pikmin feels much more distinct as a result of this new balancing act, with a variety of enemies that are based less on a large life bar and more on good tactics.

The boss fights are in some ways a mixed bag. All of the bosses are definitely epic in scale but series veterans will likely find most of them not that difficult. Most bosses are vulnerable to either a particular Pikmin type or something that involves said type and once players figure this out, most bosses don't take long to defeat. Half of the game's bosses feel like more traditional Pikmin fights, but are still nowhere near as difficult as the teeth gnashing encounters against the tougher baddies in Pikmin 2. The final boss has been criticized by some as much of it is based on sheer attrition, but the fight also can be finished much more quickly through good tactics. How good this boss and all of the others are is largely a matter of personal taste, so players should use their own discretion when hearing these decisions. 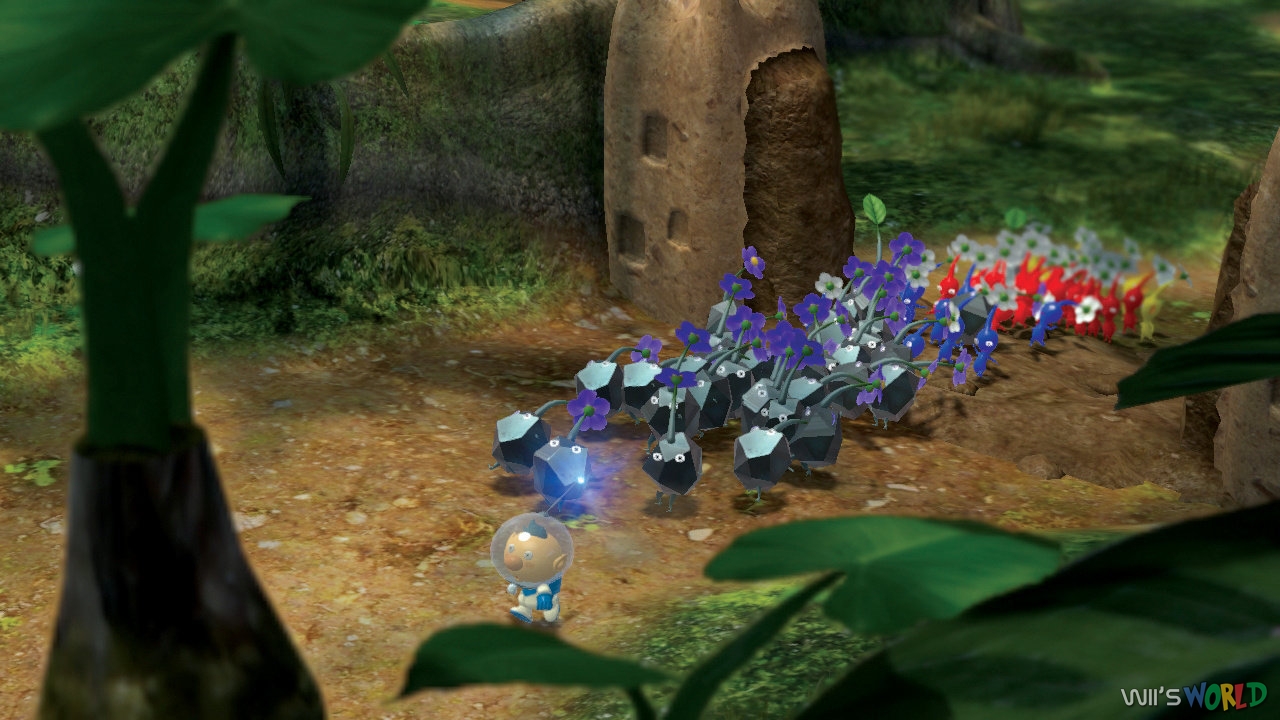 The game also uses a balance of sorts in regards to the time limit system. While the first Pikmin imposed a strict 30 day system that brought out a sense of tension and desperation, Pikmin 2 relaxed this by having no time limit whatsoever. Pikmin 3 goes for a balance of the two, with a time limit determined by the player. In order to survive away from home, the adventuring trio requires a least one bottle worth of juice per day which is found by gathering fruit. Certain fruits have more juice than others, but also are usually more difficult to obtain. This results in an excellent risk-reward system and aids in player satisfaction. In addition, if the player feels that they didn't do as well as they could have during a particular day, they can retry the day after completion. Though any progress made is eliminated, this feature can help is the player feels dissatisfied with their adventures for the day.

Graphically, Pikmin 3 is absolutely stunning and makes one wonder why Nintendo hasn't tried HD gaming until now. While one could argue that the Wii U is 'last-gen' hardware, it's hard to argue with the beautiful plants, great water effects and stunning shadow and lighting effects. Pikmin 3 is a testament to the Wii U's capabilities and is a great counterpoint to the myriad of dreary greys and browns constantly seen in more 'popular' shooters and action titles on other consoles. Likewise, the series style of mixing flora and fauna together results in a great group of life on PNF-404 that is more memorable than if the designers simply went with ordinary plants and animals.

Sound effects are largely updates of those already found in previous Pikmin titles, including the utterly depressing moans of recently deceased Pikmin. A nice counterpoint sound is that of juice being poured into containers at the end of a successful run, with players literally hearing the amount of progress made by how long the sound goes for. Music is just atmospheric and is more akin to Pikmin 2 than the catchy melodies of the first game. Though Pikmin 3 doesn't feature actual voice acting, the characters are 'voiced' in cutscenes by a mix of Banjo-Kazooie inspired gibberish and mangled Japanese, with each character being given a memorable 'voice'. It fits the game's style, though some actual voice acting might have been nice. 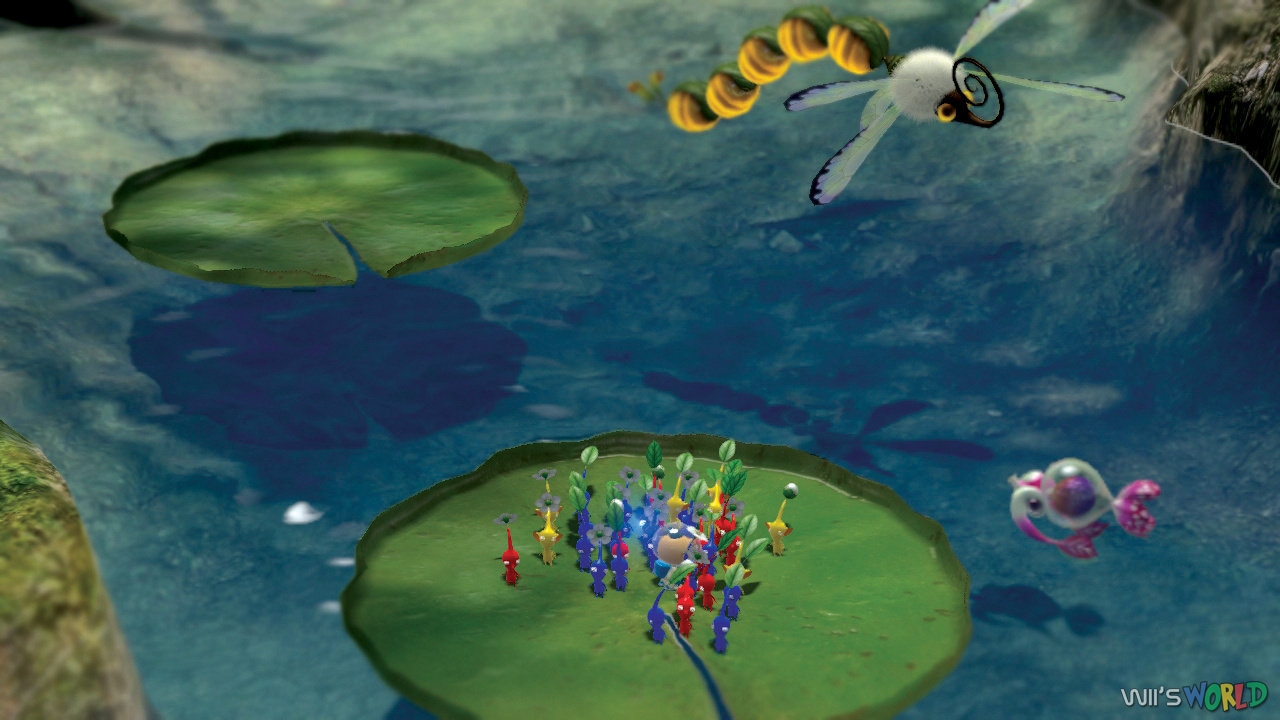 Pikmin 3's story mode is unfortunately much shorter than Pikmin 2's quest for treasure, and will last about 8 to 12 hours depending on prior experience and whether or not the player wishes to gather every last fruit. Thankfully, both Mission Mode and multiplayer are brought over from Pikmin 2. Mission mode is split into three different game types; fruit collection, battling enemies or boss fights. Each is nearly identical to those in Pikmin 2. Players are only given a set amount of Pikmin to use and tend to be much shorter than the story mode. Bingo Battle is a new version of Pikmin 2's battle mode, and is a variant on capture the flag. The interesting twist is that the players are given multiple objectives and the first to get a 'bingo' of these objectives win. Both modes are very fun, but sadly do not feature online co-op or competitive multiplayer.

Is it really possible to meet expectations for a game that players have waited almost a decade for? Maybe, but not likely. Pikmin 3 definitely isn't perfect, and at times sticks a little too close to the series' foundations. At the same time though, the gameplay proves its lasting appeal with themes that very few games are willing to explore to this day. In the end, Pikmin 3 is now the best game on the Wii U, but like the console itself, it could still do with some improvement. Pikmin 3 does imply that there are still more adventures to be had on a planet still teeming with mystery. Here's hoping that this isn't the last time we get to explore PNF-404.